Camp Foster, OKINAWA, Japan – June 23rd marked the 75th anniversary of Okinawa Memorial Day. Every year members of the USO Okinawa, American Chamber of Commerce in Okinawa, and United States military participate in the Okinawa Memorial Day ceremony to remember those who perished in the Battle of Okinawa. Attendees and participants could not gather at Peace Memorial Park this year due to COVID19 restrictions. 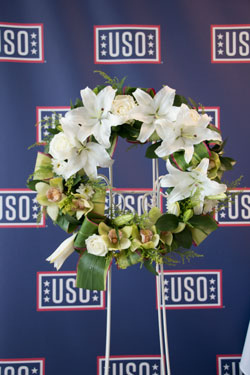 Instead of gathering in the park, USO Okinawa hosted simultaneous observations at six USO centers at local military installations. Following the lead of the citizens of Okinawa, guests at the USOs observed the day with a moment of silence at 12:00 noon. In addition, guests learned more about the Battle of Okinawa and Peace Memorial Park through a 2018 DVIDS video featuring Marine Corps Lieutenant General Lawrence Nicholson, who served as Commanding General III Marine Expeditionary Force from 2015 to 2018, and USMC Sergeant Major Mario Marquez.

Several leaders came to the USO Camp Foster Tuesday to honor those who lost their lives during this historic battle.

“Our purpose today is to take pause and remember those that died fighting on both sides,” Tony Sakuda, president, American Chamber of Commerce in Okinawa, said. “Also, we remember the good people of Okinawa that were caught in the crossfire.”

The Peace Memorial Park, the traditional location of the annual memorial ceremony, was erected in 1995 at the site of the last recorded fighting in Southeastern Okinawa. It stands as a tribute to the Japanese, American, Korean, Taiwanese, and British Military and civilians that perished during the Battle of Okinawa. The cornerstone of peace is a series of stone monuments bearing the 241,593 names of those who gave the ultimate sacrifice during the battle.

U.S. Consul General Naha, Robert Koepcke, spoke with great pride to the attendees at USO Camp Foster about the 60th anniversary of the Japan-U.S. Mutual Security Treaty which forged the alliance between Japan and the United States. This alliance is viewed by world leaders as one of the strongest in all of history.

“It is an honor to be here with you, especially at a time when we have had not enough time together recently,” the Consul General said. “We come together and reflect on what happened here 75 years ago and honor those that lost their lives in some of the most intense fighting in World War II. Historians and researchers continue to look into the past. So, our efforts to reflect on what happened continues to this very day. When you are there (at the park) it is impossible to not be moved when you see all the names of those were lost in the war.”

Koepcke shared his experience of going to Peace Memorial Park, Monday, to pay his respects to those that lost their lives 75 years ago. He reminded those that gathered of our ever-changing accounts of history and that even this year officials added 30 names to the wall.

“We could not let this year pass without honoring this occasion, COVID or no COVID,” VanEtten said. “This year was important because it marked the 75th year since the battle ended.”

“When one thinks of a service member on the battlefield, we usually envision a person that is barely 20 years. For me, I see these men and the 75 years of life they sacrificed. This brave generation fought for the ideals they believed in…all gave some and some gave all.  Our two great countries then put aside their differences to build an unequivocal alliance. The peace, that we have known and defended, is now marked by the 60th anniversary of our alliance. This peace we gratefully celebrate today. This is a story we can proudly to tell our children for generations to come.  And, let us not forget that so many people of Okinawa perished in this battle.  We (both militaries, local leaders, US Ex-Pats, and the citizens of Okinawa) stand together and remember.”