Are you a tiger or a cow? The zodiac knows your personality

Are you a tiger or a cow? The zodiac knows your personality

Every year during shogatsu, or New Year holidays, we greet our family and friends with the common phrase “Akemashite omedetou gozaimasu” meaning “Happy New Year!”

Besides the traditional food, greetings and post cards customary for ringing in a new year in Japan, discussion will often go to the eto, or zodiac symbol, of the coming year.

This year’s zodiac symbol is the rat and according to the zodiac, “rat years” are usually turbulent ones –and 2020 has definitely been that!

If you’ve ever received a nengajo New Year’s greeting post card, you may have seen a drawing or stamp with the corresponding animal mascot for the year’s corresponding zodiac.

The Oriental zodiac originated in China and today you’ll find variations in Japan and other Asian countries. Unlike the zodiac signs and horoscopes you see in western newspapers and magazines, the Oriental versions are a bit different.

While the Western horoscope uses 12 constellations for each month of the year, Oriental astrology uses 12 animals which correspond to every year and reset after a 12-year cycle. The 12 zodiac animals are ne (rat), ushi (ox), tora (tiger), u (rabbit), tatsu (dragon), mi (snake), uma (horse), hitsuji (sheep), saru (monkey), tori (roaster), inu (dog) and i (boar).

The zodiac animal symbols are used for insight into what the year will be like, as well as a person’s personality. Japanese people use it to determine compatibility with friends and even romantic matches. From zodiac symbols, you can also determine a person’s age or the year they were born.

Similar to how the Western horoscope relies on houses, sun and moon positions, the Oriental zodiac relies on other factors in addition to the symbol for a more detailed assessment. The five elements of gogyo, which are earth, air, water, wood, and fire, and the attributions and differences of yin and yang, all play into what to expect for the coming year and into a person’s personality.

I was born in 1962 and my zodiac is a “Mizunoe Tora” (water tiger - positive). According to the zodiac definitions, a water tiger is considered to have an active, powerful and liberal personality. I, however, am not sure this is a correct assessment!

Pity the poor girls born in 1966, called hinoe uma (fire horse). According to the Japanese legend, “horse women” are bad marriage risks, and these “fire horses” are totally unsuitable for marriage. I saw that the birth rate in Japan during the year dropped considerably, indicating that parents consider this legend more than mere superstition.

In Japan, the return to the beginning of one’s life-calendar after a full cycle of zodiac is a significant milestone and called kanreki. To many of us, the word is a synonym of retirement.

Today, large-sized kanreki celebrations are becoming a rarity as the life expectancy of Japanese people continues to grow and 60 years of age is no longer considered very old. Nevertheless, kanreki is still considered one of the most important of life’s milestones.

I remember that dozens of relatives gathered to celebrate my grandfather’s kanreki about 50 years ago. He wore a traditional “chanchanko” gown, which is a sleeveless red jacket that looks more like a baby’s jacket than that for a grown person. This gown symbolizes the return to the beginning of one’s life, in other words, returning to infancy. The festivities were impressive with many great dishes and presents wrapped in white and red paper decorated with crane and turtle illustrations, symbols of longevity. In contrast, my father’s kanreki 23 years ago was a smaller family gathering at home.

As I am going to meet my Kanreki within a couple of years, I am wondering what kind of celebration my wife and daughter will present me on such the important life milestone.

Today, the zodiac may be considered a little old-fashioned, but most Japanese people know their signs and follow it. Check out the zodiac below and see if what it says about you is accurate.

Note: The zodiac sign is assigned according to lunar calendar, and those who are born in January or early February before Setsubun (the last day of winter) are considered to have the zodiac of the previous year. The Setsubun is usually Feb. 2, 3 or 4 in the solar calendar. The Setsubun of 2020 was Feb. 3, and that of 2021 will be Feb. 2.

Check out your zodiac - 12 zodiacs in recent year

Match or not match – zodiacs knows the relations 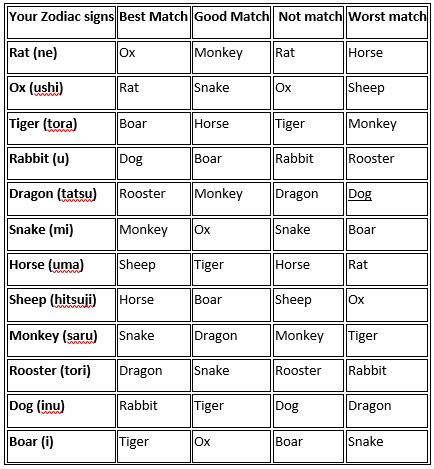 The truth about men and dogs

Year of Ox offers optimistic look at 2021 after dreadful 2020

Servicemembers, families can now attain US citizenship at only four 'hub' locations overseas