Autumn is known as the “season of healthy appetites” in Japan. It is the time of the harvest, and many ingredients are in season.

Satsuma-imo, or sweet potatoes, make their appearance in autumn. Similar to yams, the outside skin is purplish in color and the inside is more yellow than orange. Used in tempura or candied as a dessert, they are often eaten steamed, boiled or baked. They can be purchased from the store or the yaki-imo (baked sweet potato) man, who drives his truck around residential neighborhoods while making his presence known through a taped salespitch he broadcasts that can be heard several streets away.

Kuri, or chestnuts, can be roasted, peeled and eaten as is for a snack or dessert. They can also be boiled or cooked in rice to make kuri gohan (rice with chestnuts), a popular autumn dish.

Sanma, literally “Autumn sword fish,” and which is known in the U.S. as Pacific saury or mackerel pike, can be found in abundance off the coast of Japan in autumn. Grilled sanma is lightly seasoned with a pinch of salt and then served in the skin with soy sauce and grated daikon radish on the side.

Matsutake mushroom, known for its unique aroma, is often eaten in a dish called dobin mushi, which consists of a clear dashi broth, egetables, small shrimp, and other additions. Dobin mushi is traditionally prepared in a teapot, with the broth poured out into a small dish and the rest eaten from the pot with chopsticks.

Ginnan, or ginkgo nuts, are often eaten as an appetizer and accompaniment to beer or Japanese sake. They are also found in chawanmushi, or egg custard, a popular side dish to the main course of an autumn or winter meal.

Kaki, or persimmon, has a brown-orange color that symbolizes autumn. The somewhat hard peeled fruit is eaten as a snack or after-meal dessert.

Rice, Japan’s staple food, also has a seasonal component, because it is autumn when the first of the rice crop is harvested. Called “new rice,” it is softer, whiter and shinier than rice harvested more than a year earlier.

The autumn influence is not restricted to food. Brewers, like Sapporo, introduce special versions of their beers, giving them names like “Colors of Japan” or “Good Fortune of Autumn.”

With all that abundance, it is understandable why autumn is called “the season to eat.”

Shikuwasa, sometimes called a Taiwan tangerine or flat lemon, is a small, green citrus fruit whose sour taste is used to garnish dishes like sashimi and fried foods. It is also used to make jam or juice.

Handama is a distinctly Okinawan leafy vegetable that can be deep fried, stir-fried, or included in a salad.

Urizun mame  (winged bean) is a square-shaped bean that must be cooked before being used in dishes like miso soup, salad, or in stir-fries.

Umi budo  (sea grape) is a local specialty used in seafood dishes such as sashimi or atop rice.

Taman is a fish that grows as large as 30 inches and is often made into tempura.

Kihada maguro is a type of tuna often cut into raw slices and served on rice. 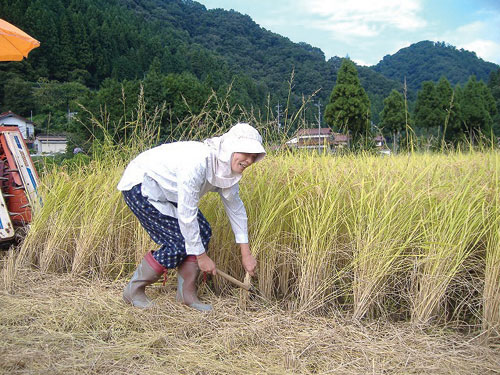 It’s no surprise that in Japan – where more than 8.5 million tons of rice was produced in 2012, alone – much ado is made about harvesting this prized staple food. Its cultivation was once even considered sacred, involving invocations of an “inadama,” or rice spirit. When the grains began maturing in the fall, for example, green sheaves were offered to this deity whose generosity was celebrated at season’s end.

“In addition to harvesting 2,140 tons of rice from late May to early September,” says Okinawa Agriculture, Forestry and Fisheries Division’s Seikou Gima, “we also harvested a second, 318-ton crop between late October (2012) and early February.”

Ishigaki Island is famed for its rice. It produces about 1,300 tons of annually – about 60 percent of all the rice grown in Okinawa Prefecture – due to its fertile soil and temperate climate which allow some fields to produce three crops annually. In the true spirit Japanese rice cultivation, Ishigki is also famed for its many “hounensai,” or harvest, festivals that occur island-wide – especially from late July to early September.

“Bunka no Hi,” or Culture Day, is a national holiday celebrated on Nov. 3 to promote culture and the arts and academic excellence. It was first held in 1948 to commemorate the announcement of the postwar Japanese constitution two years earlier.

Activities such as art exhibitions and parades are held throughout the country.  One such notable event is the Hakone Daimyo Gyoretsu, or Feudal Lord’s Parade, which takes place in Hakone, Kanagawa Prefecture. People dress as samurai and aristocrats in a display of clothing from the Edo period (1603-1868) of Japan. Other activities may include kimono wearing, Japanese tea ceremony and martial arts demonstrations, and “yabusame,” or horseback archery, such as at Meiji Jingu Shrine in Harajuku, Tokyo.

On this day, distinguished scholars and artists are presented with awards by the emperor for their contributions to the Japanese culture. 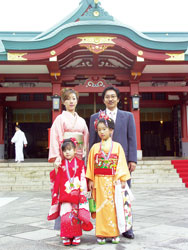 “Shichi-Go-San,” or 7-5-3, is held annually on Nov. 15 as a traditional rite of passage for three- and seven-year-old girls and three- and five-year-old boys. It is not a national holiday, and if it falls on a weekday, it is usually celebrated on the nearest weekend.

Traditionally, children could start to grow out their hair at age three. And among the samurai classes, boys could wear the traditional “hakama” clothing you see in period  dramas for the first time at the age of five, and girls could wear obi sashes with their kimonos at age seven.

Around Nov. 15, you can see many children wearing traditional hakama and kimono walking with proud parents to Shinto shrines and photography studios, whose windows are full of sample pictures of children in bright costumes.

VIDEO| Speakin' Japanese lesson: It feels like autumn is setting in