CAMP SHIELDS, Japan (Nov. 25, 2020) -- Throughout the year we reflect on the diverse peoples who, despite adversity and discrimination, contributed to America’s success with heritage month celebrations and commemorative events. November is National American Indian Heritage Month and to both teach and foster a better understanding of Native American cultures a celebration was held at Commander, Fleet Activities Okinawa’s (CFAO) Emmons Training Center Nov. 18, 2020.

Dressed in Navajo regalia guest speaker Ona Poyer-Tohonnie, from Shiprock, New Mexico, began with a proper full name introduction, which included listing her complete maternal and paternal clan lineages. She explained what every article of clothing, pattern, and color she wore represented and from her personal example led into a broader discussion on the Navajo culture.

Poyer-Tohonnie is an army spouse but her military ties go back to her two grandfathers, both of which were Navajo code talkers in World War II. She was raised in a military family and moved around the country which led to sharing her heritage from a young age. Now she continues to share it with the military community on Okinawa. 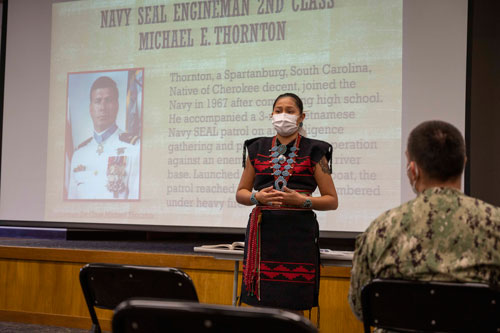 “Ultimately, I hope that indigenous and non-indigenous people will expand their knowledge and start a conversation to create a positive connection,” she said. “When we find those connections and try to look at situations from each other's perspectives we find growth, and I hope to see that in the future.”

As part of her presentation she brought displays of jewelry, crafts, and books written in Navajo. Afterwards she, her husband, and a Pueblo friend talked with visitors, clearing up misconceptions and answering questions on everything from cultural details to how they felt about military service.

“I thought it was intriguing, there was a lot more information than I thought there was going to be,” said Boatswain’s Mate 3rd Class Lauren Lafond, assigned to CFAO. “It was kind of uncomfortable seeing how much grief and pain people are in. But it was good, we need to have those conversations.”

The event was put on by the CFAO multicultural committee and included tabletop displays on different tribes and Mass Communication Specialist 1st Class David Krigbaum’s corner about the Choctaw code talkers of World War I. The original code talkers were formed in an impromptu fashion to overcome the army’s compromised communications during the 1918 Meuse-Argonne offensive. They belonged to the 36th Infantry Division, which was comprised of federalized Texas and Oklahoma National Guardsmen and had a number of Native Americans representing 14 tribes. Krigbaum wore a World War I army uniform and displayed equipment used by soldiers at the time.

“I love that the Navy is able to have special observance events where Sailors can learn about cultures that may be different from their own, but are all part of our county's makeup,” said Senior Chief Electronics Technician Brian Kelley, CFAO command climate specialist. “It's also rewarding to be able to uphold our military history by learning about the great contributions all cultures have made keeping our Navy family strong.”

Did you know?: History of American Village

More than meets the eye: 'Dead bodies are buried under cherry blossoms'