Japan is home to countless seasonal events throughout the year. Among them, however, New Year holidays, called “Oshogatsu,” are still the most important.

After preparing for the new year by cleaning up the house, cooking festive dishes and writing New Year’s greeting cards, most Japanese take three days to a whole week off in the beginning of January. During the time, the bustling Japanese economy practically comes to a standstill while schools, companies and shops close down. The closings bring cities to an almost eerie quietness until the great rush back home and return to work the second week of January.

While you’re in Japan for the holiday season, take part in some of the New Year’s traditions. Here are a few of my favorites:

Oshogatsu begins with various events on Omisoka (New Year’s Eve), and I like the day more than any of New Year’s days, as I can see people - young and old - excited and full of anticipation for a happier new year. On the day, I usually visit a large market with my wife in search of high-end festive foods, such as bluefin tuna or premium wagyu beef. The list prices of many things drastically drop, as shops looks to sell off as much as possible before closing down for the holiday. The prices might start at 30 percent off, but they go up – 50, 60 and even 70 percent off or more. Trains run all night, so crowds of people are walking on every street towards shrines and temples for their New Year’s visit. The lights are on at every house in town, showing how everybody is awake in anticipation for a happy turn of the calendar. All of it together makes me extra cheerful and happy. 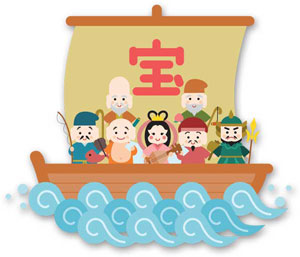 In The Land of Rising Sun, everything is reborn with the new year! In the early days of January, we often call any action and event by using the prefix “Hatsu-,” “-hajime,” or “- zome”, which literally mean “first time”. Hatsumode is the first visit to a temple or shrine, Kakizome is the first writing or drawing and Shigoto Hajime is the first day of working. I like the tradition as it has a refreshed feeling - as if I was doing things for the first time in my life. We believe Hatsuyume (first dream of the year) tells the fortune of the upcoming year. In hopes of having a good dream, we traditionally lay a classical drawing of “Takarabune” (treasure ship) under our pillow before going to sleep. Tradition says that the Seven Gods of Fortune on the treasure ship drawing come out of the drawing and present us with a great dream while we are sleeping. Mount Fuji, a hawk and an eggplant are considered the best three dreams traditionally, as they bring great luck for the year. I always prepare a pen and a memo pad near my pillow to jot down the first dream when I wake up. Traditionally, we consider the dream we see on the night of Jan. 2 as the first dream, so give it a shot this year.

Strolling in a vacant city

Different from the extremely cheerful New Year’s Eve, New Year’s Day is very quiet, as most people stay at home enjoying sake and food. Shops and restaurants in town are closed and you see very few cars and pedestrians passing through the streets. I feel the day is the perfect time to enjoy checking out fascinating decorations without the hustle and bustle of a normal day. While strolling, you can see unique traditional New Year’s decorations, such as Kadomatsu (gate pines made of bamboo stalks and pine branches) and Shimekazari (straw rope strung with small angular strips of white paper) installed at the entrance of houses, office buildings, supermarkets or shopping malls. They are believed to purify the entrance and invite new life into the home and workplace. You may also find temporary booths installed next to convenience stores. They are for onenga (gift of new year’s greetings) - cakes, cookies or towels in traditional Japanese wrapping paper. We bring the gift when we visit relatives and friends for our New Year’s greetings. It’s really a fun experience strolling in town on New Year’s Day!

When I was a little boy, a wonderful tradition kept driving me to visit my grandparents’ home every year. It’s Otoshidama – when parents and relatives traditionally give cash in a decorated envelope to children after New Year’s greetings. The amount of money given to a child depends on the age, but it is around 1,000 yen to 10,000 yen ($8.50 - 85). So, middle or high schoolers who have many relatives can make a lot of money! While most of the money is put into the bank, some would find its way to Akihabara. I can remember buying a radio-controlled car, cassette recorder and the latest Walkman with the newfound money. My 27-year old daughter often goes clothes shopping with her otoshidama. She’ll purchase fukubukuro (lucky bag), which is a mystery bag filled with unknown contents that sells for 50 percent off or more. Although she can’t tell what she’s going to get, she said it is one of the great chances to obtain luxurious clothes or goods at a special price.

Oshogatsu means the time to eat, drink and sleep for many Japanese. And sake is important in celebrating the New Year’s holiday! Celebrations begin by sipping Otoso (New Year’s spiced sake). It is made of sake and various herbs and spices. We make it by dipping a small paper bag of spices and herbs, such as bark, pepper and bellflower, into a sake bottle for a couple of days. The herb-flavored sake is thought to be effective in preventing illness, expelling evil influences and inviting good health for the coming year. In public facilities, various firms and local communities, New Year’s is traditionally celebrated with Kagamiwari (barrel opening ceremony). During the ceremony, participants open the  sake barrel with a wooden hammer before distributing the drink in hundreds of square wooden cups called masu. After everyone has received their drink, they shout “kampai” (cheers) and take a sip. With ceaseless Shinnenkai (New Year’s parties), this is the time to enjoy sake with relatives, families and friends.

Did you know?: Dos and Don'ts in Japan