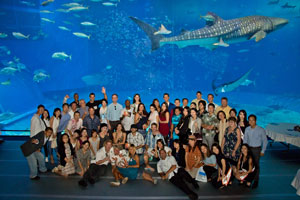 If you answered yes to any of the above, please join us for our next English Networking Dinner. 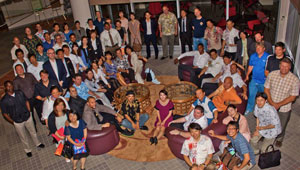 Now you are probably wondering, what is the English Networking Dinner?

Well, let me tell you.  It’s pretty plain and simple.

When did we start the English Networking Dinner?
The first one was on Camp Kinser in September 2013 with 15 people.

How many people go to the English Networking Dinner?
We currently average 50+ guests, but our largest has been 250+

How much does it cost to go to an English Networking Dinner event?
The average price is between 4,000 yen to 6,000 yen, but the price depends on many factors.

Who goes to the English Networking Dinner events?
A wide range of people from many different industries/sectors, but don’t be intimidated. We have numerous guests circulating in and out as their schedules allow, so we are sure there is someone in the group that you’ll have something in common with, be it business or personal.

Why did you start the English Networking Dinner events?
We have been VERY fortunate to have built long lasting relationships with many locals and foreigners including many members from the US and Japanese military and we’d like to share their wealth of knowledge with you. Years ago, many of our English speaking Japanese friends asked us if we could start a casual get-together with some of the foreigners and military living in Okinawa. After living in Okinawa for 17+ years and 30+ years, we, Mike Holland and Michael Hertz decided it was time to start the international get-together and it’s been incredibly popular.

What is an English Networking Dinner event?
Basically, it’s a friendly dinner that we have several times a year around Okinawa and Asia with various people that we think would benefit from knowing each other – privately or for business. The goal is to build new and/or better relationships and also be a place where Japanese can practice their English in a relaxed environment. Even though we try to make this dinner very friendly, let me stress that it is a business event. The big difference is that we make every effort to keep it fun by providing unique and in some cases exclusive locations, entertainment, great food, and wonderful prizes. We also keep it less formal by not having the stereotypical long speeches. We feel that having an informal event makes it much easier for people to talk and get to know each other. We are always looking for new and fun locations that most people have not been to so people are not just attending an event, but are also learning about a new or an old place that they have never been to before.

Can I invite a friend or friends?
Yes, of course, but please let us know in advance because we need to know the exact number of people attending so we have enough food, drinks, etc.

Can I donate a prize?
Yes, of course. We think this is a great way to promote your company to the people who attend the English Networking Dinner events and it also makes the event more fun. If you would like to donate a prize, please let us know.

Can I hand out flyers etc. at events?
Yes, you can. The purpose of the English Networking Dinner is to promote your company or what you do although pressure sales are highly discouraged.

Can you list some of your coolest locations?
We were invited to have English Networking Dinners from the Top to the Bottom of Okinawa;
nearly every base on island, countless hotels, restaurants, the Consul General’s  house, a bowling alley, in the monorail, at the Churaumi Aquarium, on a boat, on a beach, in a cave, in Hong Kong and Thailand.

Have you partnered with any other organizations?
Yes, we’ve partnered with many organizations in Okinawa and even as far as Hollywood.
Shin Koyamada (from the movie The Last Samurai) and the Koyamada International Foundation co-produced several events with us; one of which had over 1,000 guests. We have also worked with Cole & Dylan Sprouse from the Suite Life, Big Daddy, etc. on many of their events in Japan.

Please see our website for updates on when we will have our next English Networking Dinner!

Exchange celebrates Army’s 245th birthday by giving away more than $5,400 in prizes

Exchange celebrates Army’s 245th birthday by giving away more than $5,400 in prizes

Commissaries have resources to help patrons improve their health, wellness at dinner table

Valentine’s Day gift ideas to wow that special someone