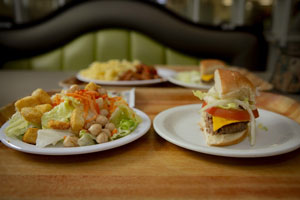 In August 2019, MCIPAC-MCBB Installation Food Service Office conducted their annual review board with patrons from across Okinawa. During the board, patrons expressed their concern with a lack of plant-based items on Marine Corps menus.

The review showed that a Marine who is vegan, vegetarian, or simply does prefer eating meat products can feel very limited in their mess hall line due it’s lack of vegan/vegetarian options. However, the Marine Corps is always finding ways to be more inclusive to Marines of all lifestyles.

There was no special setup or announcement for the newest menu item. The only adjustment made to the MCAS Futenma mess hall was a small addition to the main line.

Food service specialists asked patrons if they’d be willing to try the new item, and serving them as they passed through.

This is not the first time dining facilities on Okinawa have had plant-based options. Food items are adopted into and removed from menus depending on it’s feedback. If a food item has a decline in demand, it is removed from the menu. There have been times in the past where plant-based options were introduced into the menu, but its demand from patrons dwindled over time.

Now and in the future, the Marine Corps will continue to choose what's best to put on a Marine’s plate.