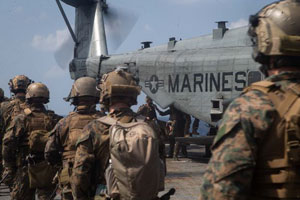 The exercise began with detailed planning across all three ships assigned to the America ARG. During the execution, dock landing ship USS Germantown (LSD 42) posed as a foreign ship that had been identified as a non-compliant vessel transporting illicit cargo, while amphibious transport dock ship USS New Orleans (LPD 18) and amphibious assault ship USS America (LHA 6) carried out the simulated mission. 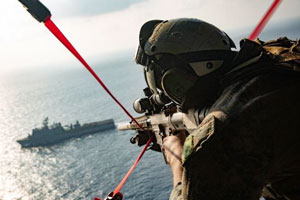 MRF Marines cut through simulated barriers and entered the ship, clearing through the ship’s narrow passageways to detain hostile forces and locate the notional cache of illegal weapons. 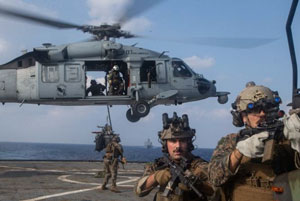 “The Force Reconnaissance Platoon (FRP) is trained and certified through multiple courses and many hours of instruction, ensuring they are tactically and technically proficient at maritime interdiction operations,” said the FRP
commander, Capt. Alexander Lizotte; “I have full confidence in the ability of each member of my platoon to successfully plan and execute VBSS.” 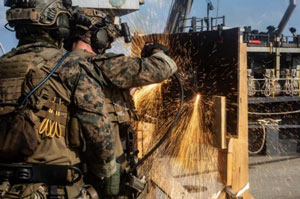 Every MEU trains to this mission, however, as the only continuously forward deployed MEU, the 31st MEU must be prepared to execute VBSS in the Indo-Pacific region at any time, including contested waters in the South China Sea. The ability to execute VBSS is a key part of the 31st MEU’s role in ensuring security and stability in the Indo-Pacific region.

“As a forward deployed MEU, we provide the most flexible and responsive capability in the world to interdict international threats at sea,” said Capt. Steven Anderson, ARP commander for the 31st MEU. “Executing VBSS is an example of the effectiveness and lethality of the Navy-Marine Corps team,” Anderson said. 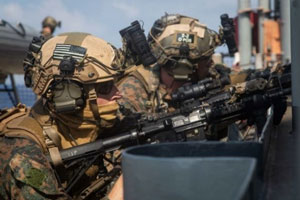 The United States remains committed to supporting freedom of navigation and international law of the sea, and the 31st MEU’s ability to execute VBSS missions contributes to these broader objectives.

“The Commandant of the Marine Corps gave specific instruction in his planning guidance to be first on the scene, first to help, first to contain a brewing crisis, and if required to do so, first to fight. The tactical discipline and aggressive action displayed this weekend by the Sailors and Marines of Amphibious Squadron 11 and the 31st MEU demonstrates to our Commandant, our allies and partners, and our adversaries that we are prepared to do just that,” said Col. Michael Nakonieczny, commanding officer of the 31st MEU. 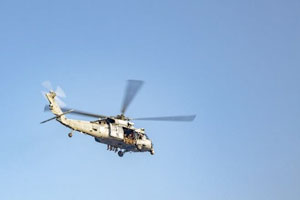 The 31st MEU and America ARG operated in the South China Sea for a short time before moving on to continue planned exercises elsewhere in the region.

The America ARG - 31st MEU team is operating in the U.S. 7th Fleet area of operations to enhance interoperability with allies and partners and serve as a ready crisis response force to defend peace and stability in the Indo-Pacific region. 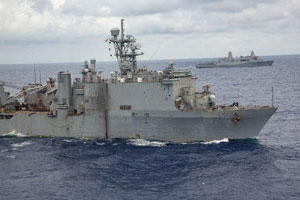