Sailors and community members beat a trail through the jungle

Sailors and community members beat a trail through the jungle

Sailors and community members came together to beat a trail through the jungle of Commander, Fleet Activities Okinawa White Beach Naval Facility to one of the sacred places within the facility’s property Feb. 20, 2021. The ongoing community relations project, “Jungle Attack,” maintains accessibility to Okinawan family tombs on White Beach.

The 390-acre White Beach Naval Facility in Uruma City is the US Navy’s primary port facility on Okinawa and is home to more than 300 family tombs and while some are located near paved roads and manicured lawns, others are at the end of lost trails reclaimed by the jungle. Armed with machetes, weed whackers, chainsaws and sickles, five U.S. Navy Sailors, four Uruma City Heshikiya District community center employees and a Japan Maritime Self-Defense Force Sailor spent two hours clearing out a path. 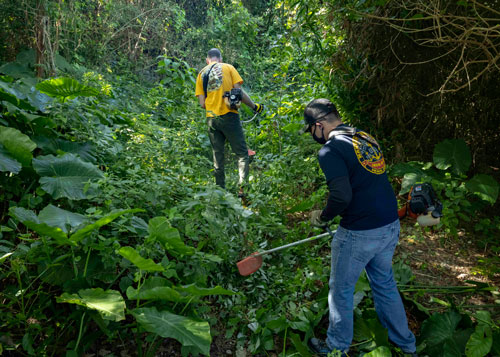 Jungle Attack’s roots began four years ago with a request from the Uruma City Heshikiya District community center to locate tombs on White Beach. Finding them to be overgrown and inaccessible, Community Chief Nishishinya Mitsuo asked for support in clearing the paths to the tombs so that they could be visited by family members.

“Then-CFAO commanding officer Capt. Mathewson saw a great opportunity for Sailors and the district to come together and by cleaning up the tombs enhance the relationship between the base and local community,” said Eisha Furuta, CFAO community relations specialist.

The result is the on-going Jungle Attack community relations project. Jungle Attack has been conducted 14 times since its inception four years ago and is performed 3-4 times annually before periods of religious importance. The February Jungle Attack cleared a path in time for two similar events, Jurukunichi and Shimi. Shimi is a week-long New Year’s festival in April based on Chinese customs. During Shimi families visit ancestral tombs to clean them, make offerings, burn incense, and picnic at the grave site. Jurukunichi, “Heavenly New Year’s Day,” is from an older lunar calendar but is still observed by some families on Okinawa. During the summer Jungle Attack is also performed prior to Obon. 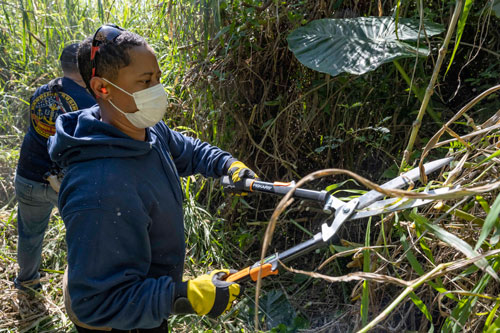 Teams of American and Japanese volunteers turn out for each Jungle Attack, though due to COVID restrictions the most recent one was smaller in scale. Every volunteer has different reasons to get involved, but for Chief Master-at-Arms Joshua Ferrer, assigned to CFAO, he saw an opportunity to put to use skills he’s cultivated his whole life, a favorite hobby and an opportunity to serve the local community.

“I like going trekking and trailing, I look at this as an interesting challenge,” said Chief Master-at-Arms Joshua Ferrer, assigned to CFAO. “I think it’s important to do this so that people can commune with their ancestors. It’s a great honor to be able to help them do that.”

Nishishinya, who was among the community center volunteers, said that Heshikiya residents appreciate the tomb clearing are grateful. He said Jungle Attack helps maintain a positive relationship with the US Navy and that he would like to continue working together.

Another Jungle Attack will be held in preparation for April’s Shimi.

Welcome to the Jungle

Gearing up for the fall sports seasons