There are a several children’s books on the market addressing topics like uniqueness or what it is like to be the “new kid,” but not very many are military specific. This prompted a former Defense Department Education Activity teacher to pen a book especially for this niche.

At the start of the coronavirus pandemic in 2020, Brooke Mahaffey wrote “I’m A Dandelion: A PCS Story for Military Children.”

PCS means Permanent Change of Station and is military lingo for being reassigned to a new location.

Mahaffey, facing the challenges of the pandemic and her Marine Corps spouse deploying, self-published the book in April 2021.

Mahaffey had always dreamed of writing whimsical stories for children.  She worked as an elementary school teacher for several years, including teaching first grade at MC Perry Elementary School at MCAS Iwakuni.

In addition to working with military children, Mahaffey is a military spouse with three children of her own, so she knew she wanted her audience to be military families.

“It’s hard as an adult to navigate the emotions around a PCS, let alone for children,” Mahaffey said in a recent Zoom interview from her home in California.

A dandelion gives strong imagery of drifting through the breeze ready to land and flourish in a new location, which is significant to Mahaffey. She has moved six times with her family, and she based her book on those experiences.

“I’m a Dandelion” tells the story of a family who receives orders to move. Their youngest daughter becomes frightened at the looming instability and new start somewhere unknown, and their older son is angry that they can’t stay where they are. The book deals with how the family moves forward, both literally and emotionally.

Mahaffey said the book is based heavily on her most recent move from Japan to California.

“It was the hardest on the family,” she said. “My oldest daughter was between middle school and starting high school, and my middle child was about to start middle school, so it was already a time of changes.”

“I’m a Dandelion” is available for purchase on Amazon. Last year for Month of the Military Child, Mahaffey donated 25% of her book sales to the Military Child Education Coalition, a nonprofit organization that helps prepare military children for college and the work force. The book has sold around 800 copies so far. She is donating 25% of all her book profits again this month.

While the writing part was fun for Mahaffey, she said publishing her first book came with a learning curve. She commissioned an illustrator she found online and used YouTube tutorials and various resources she found on the internet to help her navigate the publishing process.

Last year, Mahaffey used this knowhow to write another children’s book called “The Day Uncle Sam Lost His Yankee Doodle Dandy.” The story is about Uncle Sam pursuing his lost dog through multiple historic monuments and sites around Washington D.C. and New York City. She self-published the book last July, and it is also available for purchase on Amazon.

Mahaffey hopes to make this adventure and educational book a series highlighting different places around the U.S. She also has goals to enter the world of adolescent literature and write books for more advanced readers.

“It’s nice to be able to let my whimsical and goofy side out,” she said.

For families who are struggling with a PCS, whether it is overseas or within the U.S., and whether it is their first move or what seems like their thousandth, Mahaffey said she hopes her story can help bring peace of mind.

“My biggest piece of advice is to take the move one day at a time,” Mahaffey said. “Keep open communications with your children, validate their feelings and let them know that it is alright to be scared or nervous.” 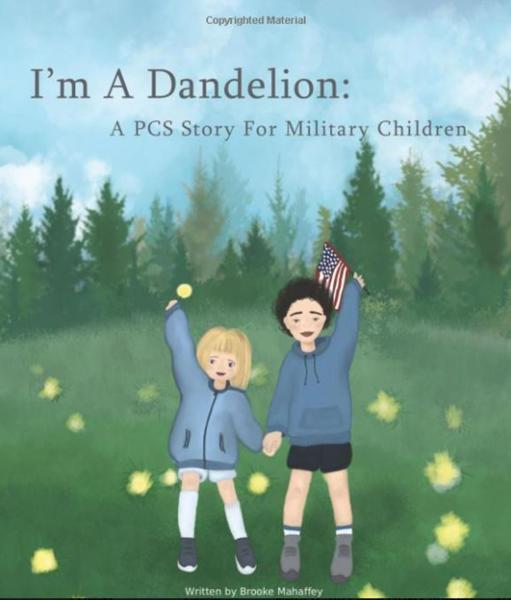 Wrestling: Osan turns back the clock by filling out the lineup