“I will never forget the feeling of sailing on wind power alone, the boat tipping and the sails filled with wind.” This US-Japanese high school student just returned from the inaugural Seto Sea Young Mariner Leadership Voyage, a 230nm expeditionary program designed to help youth develop leadership skills in a cross-cultural 6-day sailing course with 17 other students. “I loved this program. Every bit of it. I’m afraid of heights, but I loved the mast climbing. I’m not too good at public speaking, but I volunteered for mast officer. I met so many people who I will never forget. Friendships made at sea last.”

This innovative leadership training program, organized by the Yokosuka Council on Asia-Pacific Studies (YCAPS) in partnership with the International Sail & Power Association Japan (ISPA-Japan), was held during Golden Week from May 2 to 6, 2019. The program is designed to allow youths to develop leadership skills, learn about environmental stewardship and national security issues, and connect with maritime heritage through sailing. The program also fosters cross-cultural competency through interactions among participants from different countries and backgrounds. 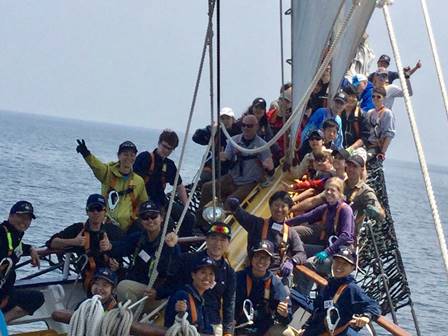 The 18 participants—from Japan, the United States, China and Vietnam—included youths ages 13 to 25. Six of them came from Yokosuka Naval Base, with five attending Nile C. Kinnick High School and one homeschooler. The other participants included: a Japanese student in middle school; four from Japanese high schools; six college students; and one working adult. The primary focus was developing leadership and teamwork through working on sails and standing watches. Seagoing skills were taught by the crew of the tall ship Miraie as participants sailed from Moji Port through the Kurushima Strait, one of the narrowest in Japan and the trickiest to navigate, to the port of Kobe. A multinational team of 10 facilitators—coming from the US, Japan, and Singapore, and including active-duty and ex-military personnel—supported leadership development and facilitated evening discussions to heighten the participants’ awareness about environmental conservation, security issues, and cross-cultural differences.

A novel approach to leadership development was adopted for this program. Unlike traditional programs, where trainees are taught about leadership styles and methods followed by opportunities to practice them, a self-discovery approach was utilized. Participants became aware of their own leadership style and those of their crew mates by working in 6-person watch teams as they performed various tasks onboard the Miraie. Guided reflection sessions allowed the participants to reinforce and assimilate their personal discoveries and team observations. The presence of facilitators and bilingual translation ensured that all students were able to express their viewpoints on security, conservation, and effective leadership. 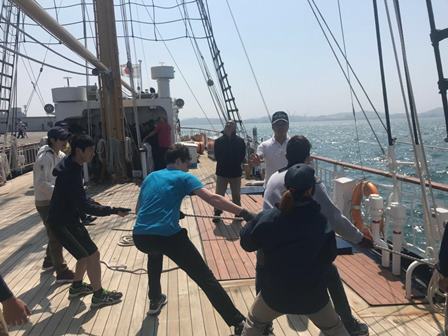 The program started with a basic orientation, covering the essential skills required to work with sails, such as the use of harnesses for climbing the ratlines, the various knots to secure the sails, chartwork, and how to steer the ship using the helms. This was then put into practice through raising the main sail and rotating the participants through 4-hour watches as the ship sailed through the night toward the Seto Inland Sea. For Tokyo-based students, seeing the North Star was a highlight. The first seminar, led by a teacher with experience in ship-board environmental science, heightened awareness about daily actions to reduce our personal carbon footprint. Most importantly, participants were given a chance to share insights with counterparts from other countries related to global cooperation around environmental themes, such as differences in consumer product packaging and transportation.

The second day opened with scrubbing the deck using coconut shells to chants of “Wasshoi! Wasshoi!” Watch teams worked together to raise and lower sails, and teambuilding games, pitting the watch teams against each other, provided more opportunities for building cooperation while having fun. Upon anchoring, participants were divided into two groups for small-group discussions on security issues led by YCAPS facilitators. The students actively engaged in a broad range of topics, such as importance of the sea, security in the East Asia region, and Article 9 of Japan’s Constitution.

The third day of the program started with competitions to test the watch teams’ knowledge of sail handling and chart work, after which the watch teams were then intentionally reconfigured for an excursion on the island of Naoshima to explore the Setouchi International Art Festival. At night, the participants were again split into two groups to talk about leadership. The facilitators asked: “What kinds of leadership styles have you observed so far? What kind of leader do you want to be?” The discussion gave them a chance to reflect on how the program has shaped the way they think about leadership, and the kinds of leadership styles comprising their crew. The evening closed with a surprise announcement by the ship’s captain, Ohara-san: “Tomorrow, would you like to take command of the ship?” The crew elected to do so. 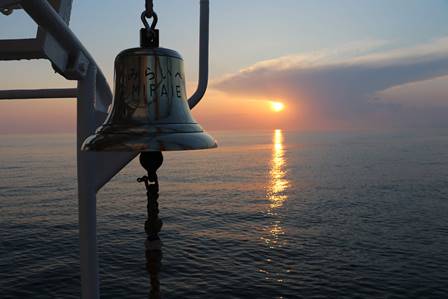 The fourth day of the program, “Command Day,” gave the participants an opportunity to work as a unified team. They were tasked with all aspects of running the ship: raising the anchor, raising the sails, navigating to the next destination, keeping watches, cooking lunch for the entire ship, cleaning the ship, and lowering the sails. The crew planned the day, studied the ropes, and established leadership positions for masts, navigation, and cooking. However, the next morning it took a significant amount of time to raise the sails. As the evolutions continued, participants problem-solved and communication improved. Those with better knowledge of sail handling gave advice to those in charge of raising and lowering the sails, allowing the participants to harness wind power fully for propulsion without the need for engines. The reflection session, held on main deck under the full sails, allowed the participants to consolidate their insights from Command Day. They appreciated the excellent lunch, and positive attitudes maintained throughout the day by all. A cultural exchange party was held in the evening to further foster relationship building. The students enjoyed getting to know each other through a variety of experiences, including a speed-conversation round where they were challenged to find something new—a “treasure”—in their group of three, then introduce each other to the rest of the crew. For example, the students discovered one participant was only a year away from becoming a doctor and had already traveled to 10 countries, another enjoys studying anthropology and is a stand-up comedian in her spare time, and three others had some previous sailing experience. These discoveries helped further solidify bonds between the crew and helped them leverage everyone’s experience for successful completion of Command Day. “I think I grew in many aspects, including knowledge, maturity, teamwork and leadership. … I also learnt how to work with people with a large language barrier…” – Chinese-Japanese participant (college student) 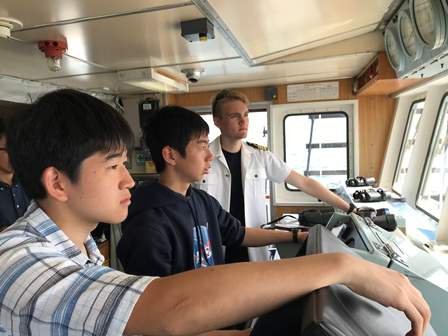 In recognition of their performance, the participants were given another opportunity to run the ship on the final day. Participants took on roles different from those they played the day before; they also came up with the idea that those in key roles on the fourth day would provide support and advice on the fifth day. The participants were able to accomplish their tasks efficiently, displaying leadership, teamwork, initiative, and communication. A final session for reflection was held to consolidate lessons from the entire program, during which the participants were asked about how they felt they had grown, their key takeaways, and whether they would recommend this program to others. Everyone reported personal growth, almost everyone mentioned the friendships they had forged as their biggest takeaway, and they were all positive in recommending this program to others. The Miraie pulled into Kobe in the afternoon, bringing a close to this program, but not before the participants exchanged contact information with promises to keep in touch. They were reluctant to leave the boat after forging such close connections. In fact, despite not having access to their phones during the voyage, most said they didn’t even think about home and enjoyed the time spent creating memories. “This voyage has changed my own perspective about what "family" is meant to be. For me, ‘family’ is when I was asked if I needed any help, it is when I was patiently explained this and that no matter how many times I asked the same questions, it is when I was encouraged ‘you can do it’ when I almost gave up, it is when I received a warm pat and a cheerful smile while crossing the hall, regardless of our tiredness. Treasure I found that ‘family’ does not mean that we have to come from the same countries, live in the same homes, share the same daily routines. ‘Family’ can be felt when we care and love each other like sisters and brothers. That is what facilitators from different places in Japan I have never met before, US high school students and Japanese students I met for the first time in my life have taught me a precious lesson about ‘family’ within a five-day voyage. That was amazing!” Vietnamese participant (college student) 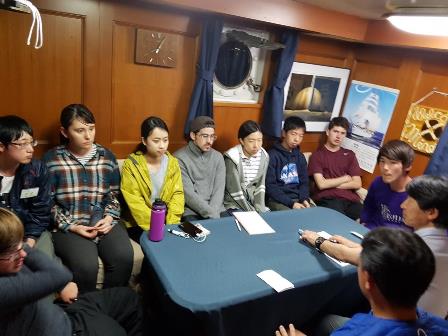 The inaugural Seto Sea Young Mariner Leadership Voyage is an example of building leadership from the ground up, and that there is no age too young for leadership development. A majority of the program’s participants are teenagers, yet they displayed remarkable esprit de corps, self-directed study, and teamwork through this challenging five-day sailing program which did not employ traditional lessons on leadership styles and methods. They were able to find ways to communicate ideas and instructions to each other across language barriers, and self-organized to accomplish the complex task of sailing a tall ship with only minimal formal training. They discovered for themselves leadership concepts such as communication; understanding; mutual respect and utilizing the strengths of team members; agreeing on and taking ownership of a common goal; and leadership by example.

YCAPS and ISPA-Japan hope to secure long-term funding for this program so that it can continue to help develop global leaders for a future that will benefit greatly from this cooperative approach. “I had to adapt, having never touched a sailboat before. But with the help of an amazing crew, and a fantastic staff of facilitators, we got the job done. This journey was absolutely incredible, and to prevent other people from experiencing the feelings we experienced might just be a crime.” US-Japanese participant (high school student)

Take Your Government Career to the Next Level With SEA