Addie Grainger and Lydia Rice simply refused to say no, even when circumstances brought on by the coronavirus could have made the two student-journalists hang up their notepads and cameras for keeps.

The Kadena High School seniors, each yearbook and journalism editors, had been instrumental in helping the school’s newspaper, the Panther Prowl, and the school yearbook – all of which shut down when the school closed March 29 over concerns about the possible spread of coronavirus.
But instead of crying about things, Rice and Grainger did things.
Using the same word-processing, page-making and editing programs on their home computers as they use in school, the two began publishing a weekly magazine, appropriately called “Socially Distant,” now in its fourth week. 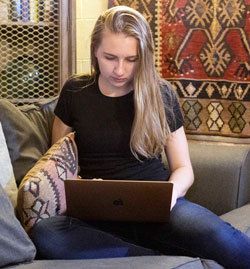 “Before spring break, we had talked about different projects we could do to pass the time and Addie came up with the idea of doing a quarantine-specific magazine for the school,” Rice said. The two pitched the idea to journalism-yearbook teacher Heather Mendoza, and it was then approved by Principal Kris Kwiatek.
“I thought it would be a good project for us to make a magazine we could publish virtually for the school,” Grainger said. It was her stepmother, Lindsay, a Kadena Elementary School teacher, who came up with the idea for the magazine’s name.

“Socially Distant” features news you can use, things tailored to helping students get through the day:
Preparing for Advanced Placement tests that must be taken in the wee hours of the morning. How to enjoy the school’s virtual prom. Even what movies and books are suited for students during a lockdown.

In the first issue, “we immediately wanted make sure that we provided up-to-date information that was specific to students in our situation,” Rice said. “We also made pages about hobbies and healthy habits for quarantine, since it’s such uncharted territory for everyone.”

The second issue featured more content from students, “taking quotes from a wider pool of students and making a Q&A page,” Grainger said.
They’re planning more on AP tests, prom and “a wider variety of interviews, in addition to topics that people have asked us to cover.”

But in addition to news students can use, the two editors have tried to keep their product as “upbeat as possible,” Rice said, including anecdotes from students, highlighting some of the comical aspects of lockdown life.

“Most of the humor we’ve attempted … is based around making fun of the situation itself and the absurdity of it all,” Grainger said.

Mendoza’s main concern was that on top of the online virtual instruction that’s become a day-to-day aspect of school, that doing a weekly magazine would be too much.

“‘It’s fun,’” Mendoza quoted Grainger as saying, “which is one of the greatest things a teacher can hear. This is the goal of education, really, to give them skills that they can use to create something meaningful.”

What other schools are doing during quarantine journalistically 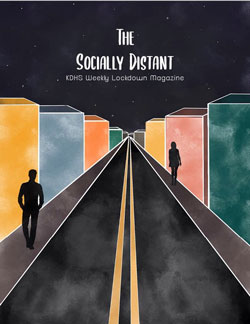 Kadena is not the only high school that has continued journalism and yearbook work despite the COVID-19 closures.

And some of the schools have had to use somewhat unconventional methods in absence of events and tournaments that otherwise would have taken place. Schools in Japan and Okinawa shuttered on March 29 and Korea on Feb. 26.

The Humphreys yearbook “lost almost 1/3 of production time due to the virus,” Humphreys High School yearbook sponsor Molly Austinson said.
“We had to get creative (after losing) a couple of spreads for events and clubs that never got started,” Austinson said.

The page that would have been devoted to the school’s talent show ended up with information on students who would have performed, Austinson added.

Spring athletes in line to set track and field records and defend their Far East Division I softball tournament title talked of what their hopes were for the season.

Malley said the staff just got the OK from school administration to publish its March and April Fool’s editions and are working on more.
The Samur-Eye school newspaper at Matthew C. Perry High School in Japan is continuing with its year-end issue, but with 16 pages, instead of the customary 32.

Journalism instructor Mark Lange said the staff is also piecing
together a “greatest hits” edition of stories from the school year.

Most yearbook staffs have already met their annual deadlines, but others are continuing to put their last pages together. Daegu Middle High School’s yearbook is doing spreads for each year in school about their quarantine experience, staff members told Stripes.