Editor’s note: At Stripes Okinawa, we love to share your stories and share this space with our community members. Here is an article written by Lester Middle School 7th grade student Landry Murray. If you have a story or photos to share, let us know at okinawa@stripes.com. 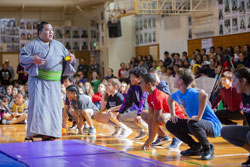 Living in Japan provides the opportunity to learn about and honor the various aspects of Japanese culture, like sumo wrestling. Sumo is one of the most popular sports in Japan because of sumo’s impact on the history of Japan and because of the wrestlers, rikishi, who dedicate their whole lives to the sport.

The students of Lester Middle School were given the opportunity to see Kotoodutsu and Kotoeko in person. The students loved asking the sumo wrestlers questions and watching their teachers sumo wrestle. Lester P.E. students had been working on their sumo warm ups and wanted to show the professional sumo wrestlers how they do it, and hoping to be critiqued by them and get better. According to one advanced P.E. student, Tobin Kaiser, “It is kind of hard because you have to have a lot of lower body strength.” So, everyone should have respect for what sumo wrestlers do every day because it is not nearly as easy as it looks. The wrestlers were unable to show the students their wrestling skills because all of their equipment had already been taken to the Gushikawa Dome, where a sumo tournament was being held. Instead, some of the teachers wrestled while the professionals acted as the referees.

Before the bouts, the sumo wrestlers answered some questions collected from the students at LMS. Kotoeko said that he decided to become a rikishi because he was inspired by his grandfather, who was also a rikishi. He wanted students to know that although the sumo bouts on television start at four p.m., they really start at eight a.m. Kotoeko’s goal for 2020 is to move up in ranking.

After the assembly, one student said, “I thought the assembly was very unique and different from our regular assemblies. I enjoyed the questionnaires and the teachers who volunteered to wrestle each other.” Another student said, “I enjoyed the assembly because it was hysterical watching the teachers sumo wrestle.” Most of the students enjoyed watching the teachers sumo wrestle the most but they all appreciated seeing the wrestlers in person and hearing their point of view on what they do every day.

Sumo is not a sport for the weak. You must have discipline in order to be a great wrestler. The Lester Middle school students enjoyed seeing the sumo wrestlers Kotoeko and Kotoodutsu. We were happy to learn how sumo wrestlers work very hard to become as powerful as they are and embrace the history of Japan as they wrestle.

Wrestling: Osan turns back the clock by filling out the lineup