I have dined in luxurious restaurants and exotic tiny local eateries around the world, yet when it comes to naming the most memorable meal of my life there is only one that comes to mind – our family dinners on New Year’s Eve at my grandfather’s house back in Tbilisi, Georgia. 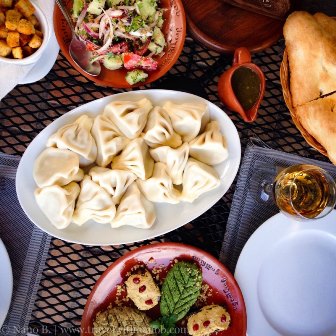 He was a character and a man of many vices and love of food was definitely one of his greatest guilty pleasures (along with expensive AND extravagant designer clothes, but hey, the man could live). I remember how much he loved New Year’s Day (in fact it was his second favorite holiday after his birthday. Yup, that was him), and how he’d start preparing for the feast a month in advance (much to my grandmother’s vexation because she had to cook all this). He’d browse supermarket stalls and delicatessen for Osetra caviar, smoked salmon and other gourmet foods and make multiple trips to farmers’ markets to pick up the freshest organic produce, proteins, cheese and fruit. Fruits were always a staple, grapes from his native Armenia, flavorful tangerines, as well as bright yellow oranges bigger than his palm. He had a thing for those succulent oranges and I can still remember how their aroma filled up the room as grandma was cutting them in perfect circles (because that’s how grandpa liked them served). 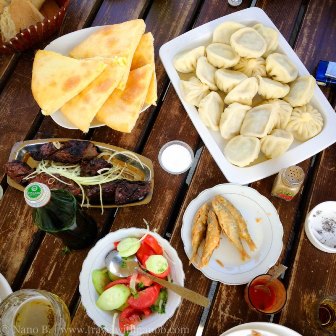 The table had to be filled to the brim (that’s how Georgians and Armenians love to do it). At times even having plates stacking on top of each other. Supra (festive feast) is a sacred word in Georgia. It’s how families celebrate, friends party, and even how important decisions are made. We drink, we eat and then we drink some more. I think what never fails to shock foreigners in Georgia (in addition to how much we drink) is how much food we throw on the table and how much leftovers we usually have in the end of the feast. Here is the thing – if nothing is left on the table a host feels embarrassed and thinks he didn’t serve enough food. Simply put, enough is not enough in Georgia.

In our house no New Year’s feast would be complete without crispy suckling pig roasted in a wood fired oven, boiled sturgeon and satsivi – turkey (or chicken) in a traditional piquant walnut sauce. 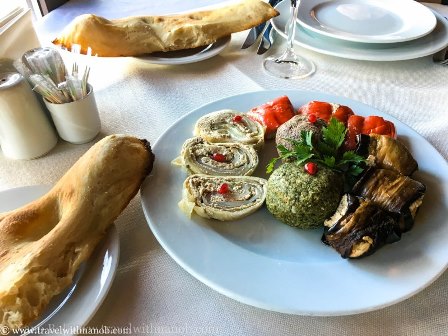 Appetizers like eggplants, spinach, chard and beats individually doctored up with walnuts and Georgian spices are there to whet the appetite for the feast to come. Georgian cuisine is quite meat centric with mtsvadi (charcoal grilled pork on the skewers) and khinkali (flavorful beef dumplings) being the ever present two dishes worshipped nation-wide. Oh and did I mention THE cheesebread? That buttery fluffy dough filled up with oozy cheese? There is a basic kind that looks like a pastry, and then we have this boat-shaped goodness topped with butter and egg. 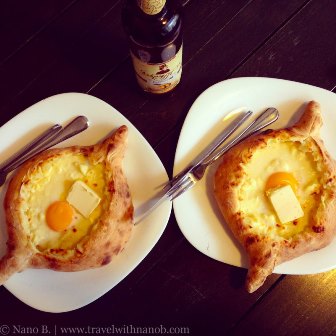 Talking about cheese, it’s a staple in any Georgian family and we have three basic kinds and dozen more regional specialties around this seemingly compact country. We even have our take on mozzarella (slightly saltier and firmer) which my grandpa and I both adored.

And of course, Georgian wine has to flow non-stop and bubbly is popped open right as the clock is about to strike midnight.

At times we’d sit for hours devouring the food and toasting to the successful past year and happy months to come. I’d lie if I said that all family gatherings were always pleasant. As the very dominant head of the family, my grandfather always had a lesson or two to teach his son and daughter and grandkids at all occasions. Awkward conversations would be a frequent guest at the table and God forbid anyone attempted to contradict him. As annoying as it would sometimes be at that moment I keep looking back at those moments with nothing but love. We were all together, we were a family.

Grandfather passed away on New Year’s day past December fighting cancer with the same fierce passion as he shopped for his holiday feast. That night, put off and unable to consume any food or liquids he only managed to munch on a tiny piece of his favorite orange that I had peeled by his bedside.

British 'tea shop' is much more than meets the eye