Summer in Japan gets scorching and steamy. Mid-summer Temperatures often reach 95 F or higher depending on the region. Along with beer, watermelon and soomen (cold udon noodle), kakigoori (shaved ice) is a popular cold food that cools us down during summer. 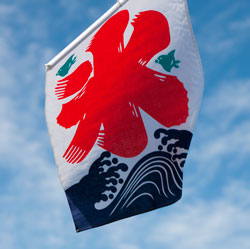 For many Japanese, the memories of a banner with the red kanji letter of koori (ice) in white and a blue background are fond ones. These banners are seen outside shops offering kakigoori and often meant a sweet, snow-like treat to help us cool down as kids.

Besides at local sweets stores, kakigoori can be found at matsuri and bon odori festivals or fireworks events, along with other festive foods.

“Kakigoori is one of the most popular traditional cold sweets throughout history,” says Ryusuke Koike, managing director of Japan Kakigoori Association. “This cold food goes back to more than 1,000 years and has been enjoyed as festive food for special occasions.”

Kakigoori is not only available during the summer, but it is a year-around cold dessert, according to Koike.

“Since a lot of kakigoori joints make their syrups and sauces using fruits in season, they offer different types of throughout the year,” Koike said. 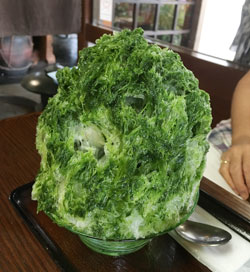 In fact, there are countless types of syrups and sauces. While many places offer the standard strawberry, cherry, lemon, green tea, melon and colorless syrup, others offer unique syrups made from vegetables, sake, wine, or even vinegar, miso or soy sauce.

Japanese kakigoori may remind many of a snow cone, but there are few significant differences between the two iced sweets.”

“Japanese kakigoori has a really fine, smooth fluffy ice consistency, just like fresh fallen snow,” Koike said. “While Americans make snow cones with extreme hard ice, we would never do that to keep it soft and fluffy.”

Besides the difference of ice, snow cones usually come with artificial flavors, while kakigoori uses more natural syrups and ingredients, such as sweet beans, matcha and brown sugar.

But, despite a key difference in the flavoring, the main part of kakigoori is actually the ice, according to Koike.

“Most of kakigoori joints pay more attention on the quality of ice, rather than varieties of syrups, since quality and condition of ice determines the taste of kakigoori,” Koike said. 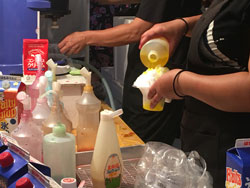 For Japanese kakigoori, extreme cold ice is not good. For a fluffy snow-like soft texture, the ice temperature needs to be kept around 14 F.

“Since ice in freezer is usually around - 4 F, we need to take out the ice and warm it up before we shave it,” Koike said.

Clean and transparent ice is ideal, as it can make smooth, fluffy kakigoori. Water that takes a long time to freeze can make clean ice.

Why not make kakigoori yourself?

You can make a transparent ice yourself. Wrap an ice tray with a towel before putting it into a freezer. This will make the ice take longer to freeze which should ensure the ice is transparent, according to Koike.

Then, you can shave it by using a hand-spinning ice shaver, which can be found at various stores for around $30-40.

The hand-cranked ice shaver is a popular kitchen item in Japan. It is fun making kakigoori by spinning a block of ice over a blade by turning the lever by hands. Syrups for kakigoori are available at most of supermarkets or grocery stores.

According to Japan Kakigoori Association, there are some tips to making tasty kakigoori at home: Use mineral water instead of tap water when you make ice. Serve it in a glass bowl to make the colors stand out, and be sure not to put on too many toppings as it can spoil the fluffy texture.

Now that you know, get out and enjoy the hot Japan summer with some cool kakigoori!

On a remote island of Okinawa, efforts to perfect the art of the shaved ice led to quite a collaboration.

Ruan + Shimairo is a shaved ice shop on Miyagi Island, which is to the east of Okinawa’s main island. Although people can get there by car crossing “Kaichu Doro” (Sea road), it often can be a long drive from the main island. Despite the drive, the fluffy shaved ice served up beautifully on Yachimun pottery draws many to the small island.

“Our shop is a collaboration of Ruan, a shaved ice shop, and Shimairo, a Yachimun pottery shop,” said Tsubasa Nishizawa, who launched the place in 2015.

One step inside and your attention is drawn to the pink and light blue themed pottery, which are the work of artist Katsushi Shimabukuro.

The idea of putting shaved ice on the local pottery creations sounds innovative itself. And Nishizawa makes this unique presentation in a meticulous way. 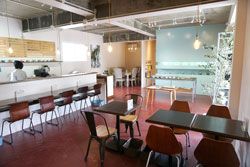 “Original products from Shimairo are used for the serving dishes of Ruan. I carefully pick a piece of pottery that goes well with the color and image of the different syrups,” he said.

And if you like the dish enough, authentic Shimairo pottery is for sale on the spot.

For Nishizawa, who was trained at Noan, a nationally-known shaved ice shop in Kanagawa prefecture, details matter a lot in making shaved ice.

“Shaved ice is a food, but to enjoy eating it means enjoying eating water,” explained Nishizawa. “To make it possible, I need to pick pure and tasty ice. Adjusting to how thick ice should be shaved is needed too, depending upon temperature and moisture.”

Shaved ice which is carefully presented at Ruan + Shimairo dazzles not only Japanese but also Americans, according to the owner.

“Flavors such as mango and milk caramel are popular among Americans,” stated the owner. “I often see them leave the shop with a smile on their face.” 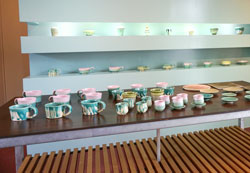 When asked about the essence of shaved ice, Nishizawa stated, “Shaved ice may sound simple. Shaving ice and pouring syrup is all it takes. But there are various elements behind the scene such as temperature, thickness, and when to pour syrup. The depth really fascinates me.”

Being simple but deep is probably something the treat has in common with Yachimun pottery.

This collaboration would make sense not only to shaved ice, but also to the art of Yachimun pottery because it is often said people need to actually use the products to see if they are really good.

Having shaved ice at Ruan + Shimairo can give people the triple pleasure to their eyes, taste buds, and hands.

It doesn’t get much better than eating shaved ice during the summer. But making the cold sweets at home offers a different sense of joy.

Kakigoori-ki (shave ice machine) is a common item for families with children in this country. Just like many flavors are introduced at shops every year, shaved iced machines are also evolving to show great variety. But there is a trend commonly seen in many of them: nostalgia.

“Kyoro-chan” is a shaved ice machine that looks like a cubby bear doll.

Originally released in 1976, this cute looking machine became a hit back then. When the handle on the top is turned, the cubby’s eyes move left and right. The name Kyoro-chan refers to this gimmick, which was very appealing to kids.

Although it was discontinued for a while, Kyro-chan was brought back in 2016 with the same design.

“Ice Robo III Hatsuyuki” is another popular shaved ice machine with a retro look. At first glance, the yellow, red and green machine almost looks like a character out of an old Nintendo game. But, on the inside, this machine has an advanced system that can automatically make shaved ice, even allowing to adjust sizes.

It is said that Kakigori-ki became commonly available in the Showa era (1926 – 1989). This machine has wheels and a logo that can remind Japanese of when they ate shaved ice at stores in their neighborhood back in the day.

Thanks to an updated system, this retro-looking machine can shave ice to fluffy flakes, something only stores could provide back then.

These shaved ice machines are closely associated with people’s happy memories of having the cold sweets as a child. The sense of fun and nostalgia is so strong that you could feel it even if you didn’t live in Japan in those days.

Did you know?
In Japan, kakigoori has been enjoyed for more than 1000 years. Makuranososhi, an essay by Seisho Nagon, has a description of people enjoying kakigoori in the 11th century.

When summer rolls around and the temperature rises, the shaved ice scene also heats up on Okinawa.

Local stores become busy shaving ice blocks to give customers a quick break from heat. Shaved ice’s popularity is something common across the country, but on this subtropical island, however, the cold desserts also reflect a unique food culture.

Tamaya is a shaved ice store a ten-minute drive from Gate 3 of Kadena Air Base. It is a place where many locals come looking for “zenzai” shaved ice.

Normally, the word “zenzai” refers to sweet red bean soup in Japan. But on Okinawa, it commonly means shaved ice topped with red kidney beans and white rice cake balls. Many local stores serve up this unique dessert, with banners and flags with the word “zenzai” often seen along streets.

Tamaya is one of the stores where people can see the zenzai boom - where the cold sweets are evolving into something special.

At first glance, the store’s shaved ice looks like cotton candy because of its exceptional size and fluffy texture. The heap of shaved ice is almost three times the size of a plastic cup, presenting a look of a small snow mountain.

“Many customers are surprised with the size,” said the store owner. “It is my motto to satisfy customers as much as possible for a reasonable price (400 yen for zenzai, 450 yen for milk zenzai) even though it takes more time and effort.”

His dedication to zenzai goes deep.

Once digging in, customers find out the sweet taste of the beans and syrup from top to bottom. The texture and taste don’t stop entertaining customers’ taste buds from the beginning to the end.

There are a couple of clues the shop owner shared with me as to how to make tasty shaved ice. First, ice blocks should not be shaved immediately after being taken out of a freezer. Giving it 10 minutes or so before shaving is a key to making fluffy flakes. Plus, stacking shaved ice should not be done all at once, but in a couple of parts. This way, syrup can be poured in each part at a time.

“I had an experience of carving ice before launching the shop,” the owner said. “Some knowledge I learned through the experience and my expertise as a professional cook helped me a lot.”

Plus, the beans used for his zenzai are specific ones bought at a certain store in Naha. They need to be cooked carefully so that they have enough sweetness.

The owner’s dedication to zenzai translates to other varieties offered at the store. Flavors such as strawberry, dragon fruit (seasonal) and mango are available there. Although zenzai is a hard sell for Americans, fruit-flavored shaved ice is popular among them, according to the owner.

“When it comes to fruit-flavored shaved ice, Americans eat more than Japanese do,” said the owner. “Ichigo milk (strawberry milk) is the most popular.” 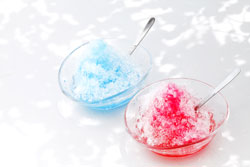 Colorful artificial syrups for kakigoori are sold in most of grocery stores throughout the nation. Although they are sold with different names, including lemon (yellow), strawberry (red), melon (green) and Blue Hawaii (blue), their tastes are all the same.

Biting into the history of the hamburger in Japan