For lovers of Japanese beer, Sapporo is the holy land! The capital city of the northern island of Hokkaido and the birthplace of the beloved Sapporo Beer, Sapporo is home to Japan’s first beer brewery, only beer museum, and brims with countless mouthwatering attractions for a deep dive into Japanese beer culture.

Best of all, Sapporo boasts rare, limited-edition beer flavors that can’t be found anywhere else!

What Makes Sapporo Beer so Delicious? 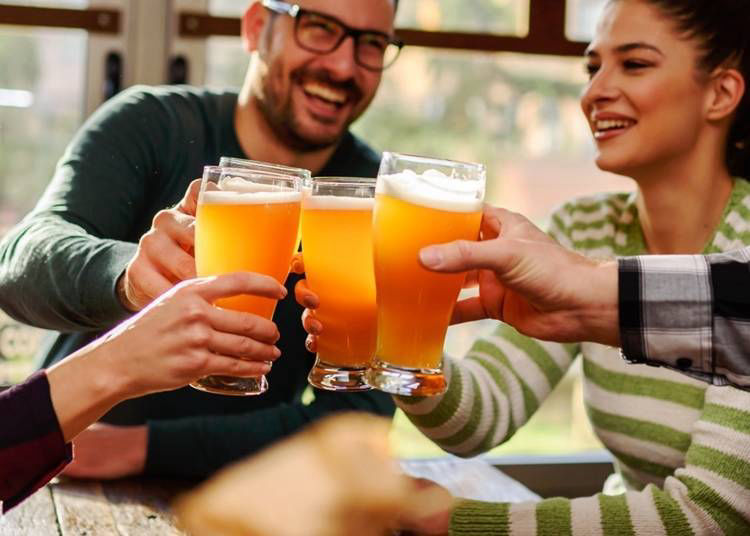 Since its inception, Sapporo beer has been brewed with an unwavering dedication to sourcing the finest ingredients. As the quality of beer can be drastically altered by its malt and hops, the base of a good beer comes from careful ingredient selection.

Sapporo Beer takes this even further, being the only brewery in the world to cooperate with global growers to cultivate their own unique source of barley and hops.

As the central agent transforming barley and hops into the beverage we all love, yeast selection is another fundamental aspect of brewing. In order to ensure a uniform flavor across all beers, specialized technicians tirelessly observe and protect the delicate yeast as it works to ferment their brews.

Having spent decades researching beer yeast, Sapporo has now amassed a priceless bank of over 1000 strains - the envy of brewers worldwide.

With such fine ingredients combined with the unwavering passion of the brewers, it’s no wonder that Sapporo Beer tastes as good as it does! 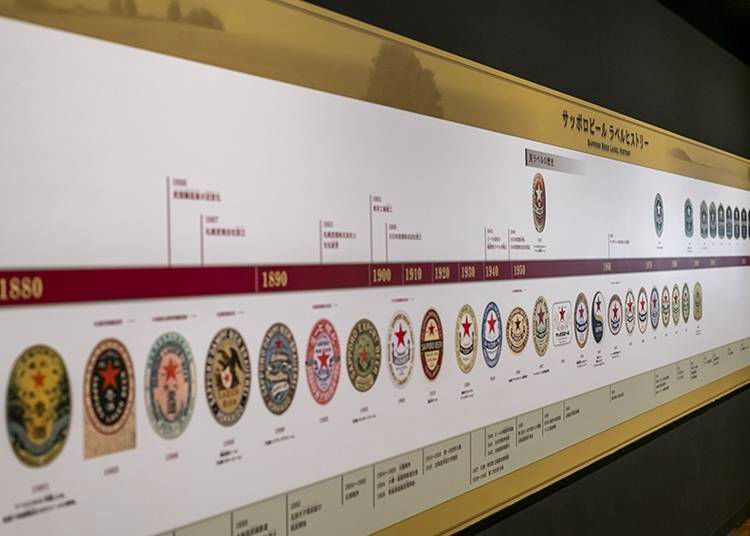 The roots of Sapporo Beer begin in Sapporo City with the founding of the Kaitakushi Beer Brewery in 1876 by the government’s early-Meiji period administrative unit for Hokkaido.

Sapporo Beer’s iconic star logo can be traced back to the ‘red star,’ which was the symbol of the early pioneering administration. This connection serves as proof of just how deeply the humble brew is intertwined with its homeland of Hokkaido.

When Sapporo ventured into America in 1980, it was relatively unknown compared to other Japanese businesses at the time. However, after much effort through local promotion and word of mouth, Sapporo rose to become Japan’s most popular beer producer by 1985. It defended the top spot for over 30 years.

Afterwards, Sapporo purchased Canadian brewery Sleeman and completed a brewery/factory in Vietnam, allowing them to expand and spread Sapporo Beer all over the world.

From their untouchable Black Label to the classy Ebisu, along with rare, limited-edition brews, Sapporo’s vast range of different tastes and styles means there’s something for everyone!

Here we’ll list each of Sapporo’s greatest hits, along with a few unique brews you’ve got to try when visiting Hokkaido!

For the fresh, rich taste of an unpasteurized beer, nothing beats Sapporo’s legendary Black Label. Using Sapporo’s own malt carefully cultivated to retain its flavor for a long time, the balance between the sumptuous wheaty body and the clear, crisp aftertaste make this number a sure-fire winner. 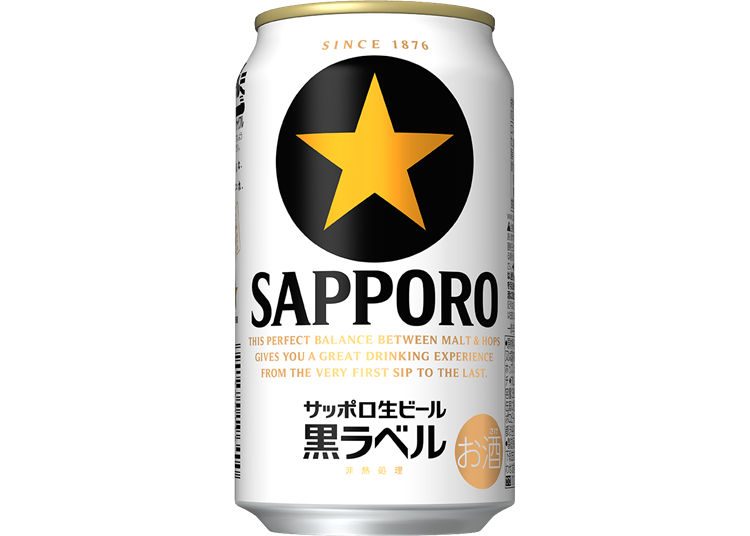 Since its inception in 1890, Ebisu has successfully managed to preserve its much-celebrated original taste. Using no added ingredients, Ebisu beer is brewed from a simple mix of malt and distinctive aromatic hops sourced from the German state of Bavaria. Coupled with stringent yeast selection and a lengthy maturing time, Ebisu beer yields a powerful fragrance and rich taste.
・ABV: 5％
・Calories: 40kcal (per 100ml)
・Sold at: Japan-wide supermarkets, convenience stores, and liquor shops 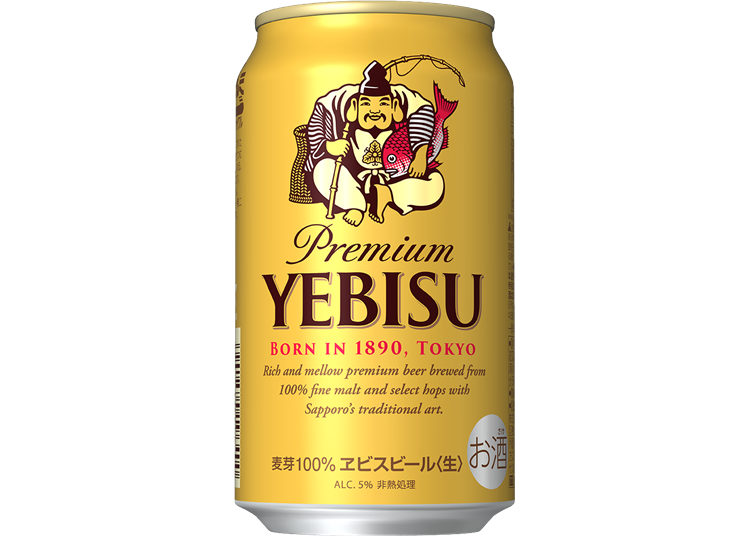 Sapporo Classic is a limited-edition Sapporo Beer generally only available in Hokkaido. It is favored for its rich, savory taste and fresh, invigorating mouthfeel. While nothing out of the ordinary for residents, many travelers to Hokkaido always make sure to buy a can before returning home!
・ABV: 5％
・Calories: 40kcal (per 100ml)
・Sold at: Hokkaido supermarkets, convenience stores, and liquor shops 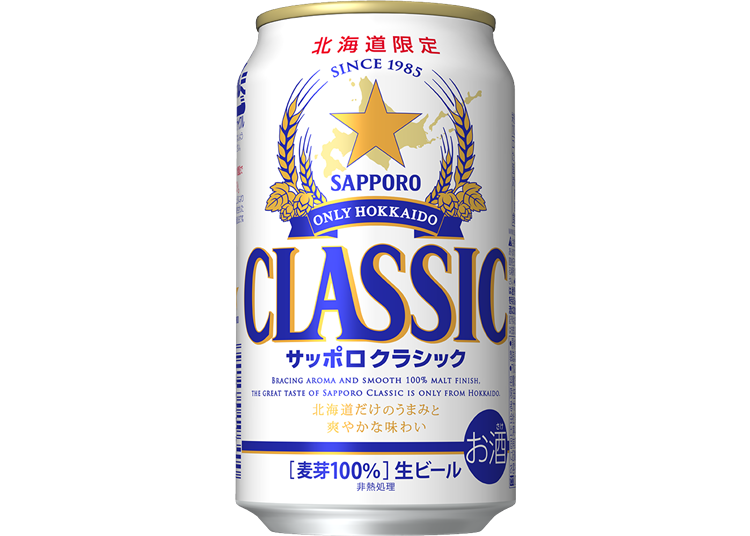 Haru no Kaori is a Hokkaido-only springtime beer on sale from 6 April 2021. The supply is limited, so get in quick!

Made from a mix of Hokkaido-grown ‘Furano Honoka’ hops and ‘flavor hops,’ this beverage celebrates spring with a fresh fragrance and vivid taste. As the production schedule is not fixed every year, fans should confirm the release dates and availability on the official Sapporo website.
・ABV: 5％
・Calories: 41kcal (per 100ml) ※as per the 2021 edition
・Sold at: Hokkaido supermarkets, convenience stores, and liquor shops
*Details are subject to change

With stronger carbonation and a higher ABV than a regular Sapporo Classic, Natsu no Soukai is an invigorating, refreshing way to beat the heat of Japan’s notoriously humid summers. The details may change, so check the Sapporo website in advance for the most accurate, recent information.
・ABV: 5.5％
・Calories: 43kcal (per 100ml)
・Sold at: Hokkaido supermarkets, convenience stores, and liquor shops
*Details are subject to change

This beer uses unique ‘Sorachi Ace’ hops developed by Sapporo in the town of Kamifurano in the titular Sorachi District. In the 35 years of production and perfection since, Sapporo SORACHI1984 has become known for distinct fragrances of hinoki cypress and lemongrass. While it is available year-round across Japan, it is best relished at its birthplace.
・ABV: 5.5％
・Calories: 45kcal (per 100ml)
・Sold at: Hokkaido supermarkets, convenience stores, and liquor shops 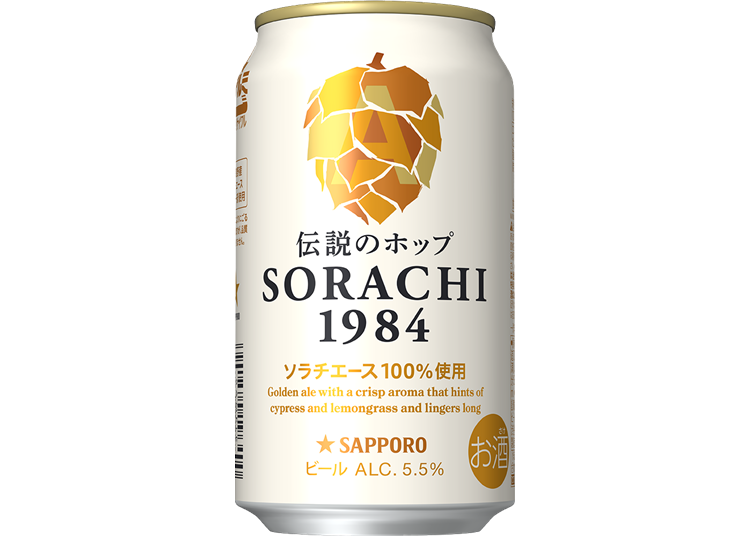 Known by fans as the ‘red star beer,’ Sapporo Lager Beer was the original brew developed in 1877 by the pioneering Kaitakushi Beer Brewery that has been handed down the generations. Now reigning as Japan’s most historical beer, this bottled lager boasts a mellow and sturdy character born from its pasteurization.
・ABV: 5％
・Calories: 40kcal (per 100ml)
・Available at: Various Japanese bars, pubs, restaurants, izakaya, etc.
*While this beer is available for sale across Japan, it is primarily sold in bulk to food/drink establishments in medium/large glass bottles. 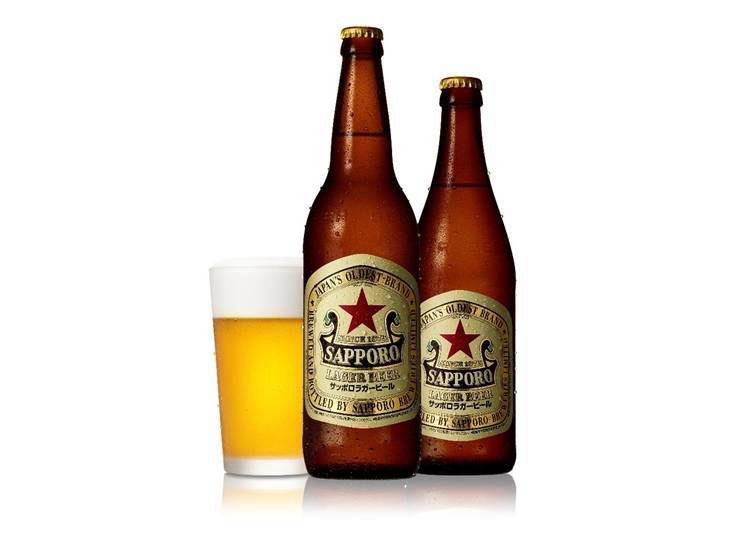 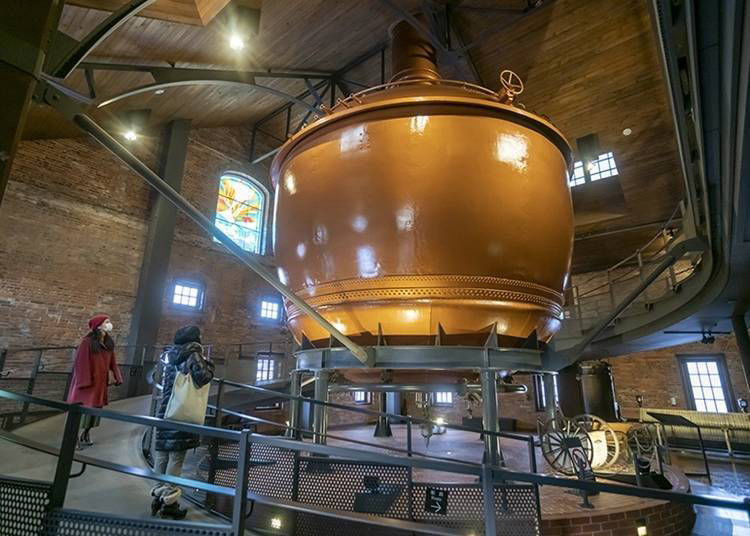 Nothing deepens appreciation for food and drink more than learning its history and production. And for Sapporo Beer, there’s nowhere better to discover these intriguing features than the Sapporo Beer Museum!

An 8-minute walk from JR Naebo Station, next to Sapporo Station, the museum forms a part of the multipurpose Sapporo Garden Park. Featuring historical displays and materials unraveling each decade of Japanese beer production from Hokkaido’s pioneering days until the modern era, you’ll discover a fascinating new side to Japan’s history and culture.

Best of all, entry is free! A steal considering all the fantastic exhibitions inside, including a 10-meter beer boiling vat!

For those who want to take their education to the next level, guided ‘premium tours’ can also be arranged (separate fee).

Here you’ll dive deeper into Sapporo Beer’s history while tasting the museum-only ‘Sapporo Reproduction Beer,’ an authentic recreation of the original taste of Sapporo Beer during its founding.

In addition to the multi-language voice machines (separate fee), there are also informative pamphlets in English, Chinese, and Korean available (free). 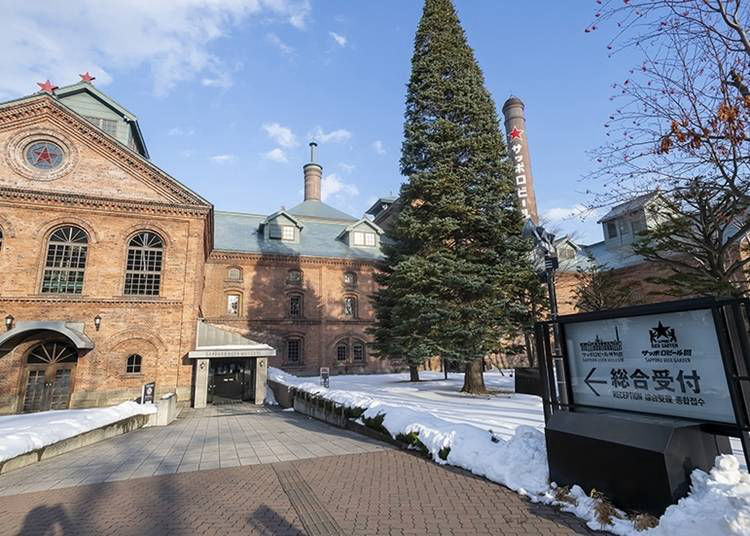 The building itself, which is a designated ‘Heritage of Hokkaido,’ was originally constructed in 1890 as a sugar manufacturing factory before being used as a malthouse between 1905 and 1965. 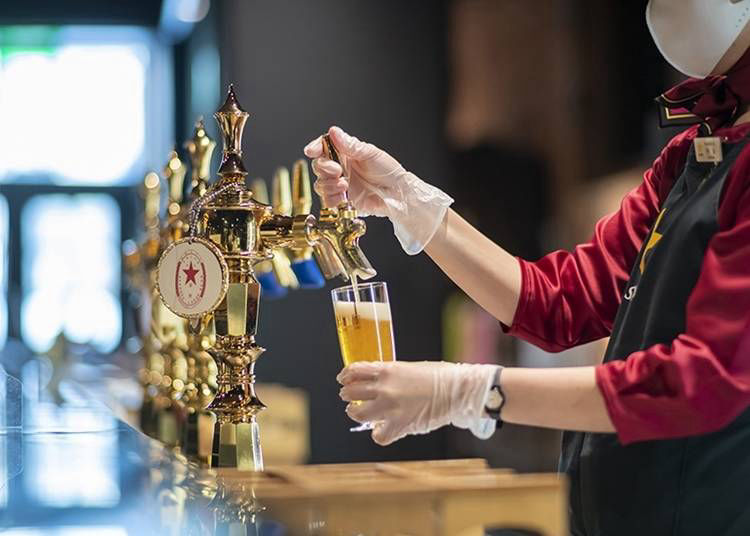 The 1st floor ‘Star Hall’ has Sapporo’s vast beer range on tap, including Black Label, the Hokkaido-only Sapporo Classic, and the ‘Kaitakushi Pioneer Beer,’ which is brewed by the Sapporo Kaitakushi Brewery on the same ground as the original (all ABV: 5％). 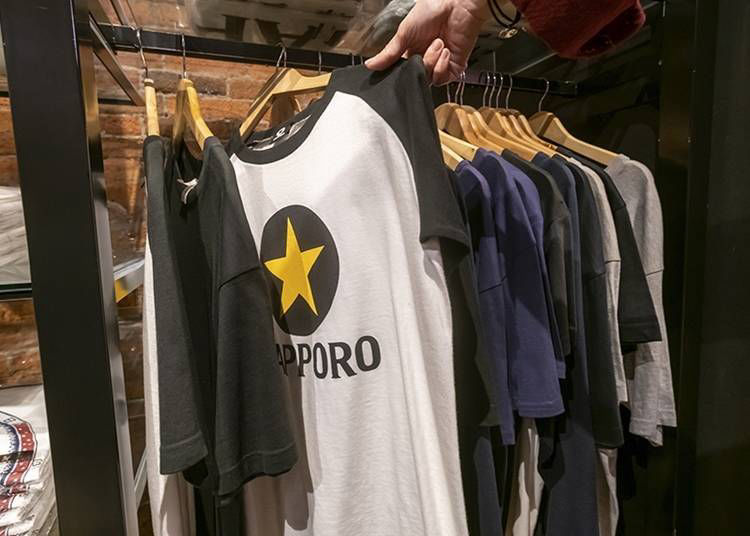 You can also get yourself some limited-edition Sapporo Beer goods at the museum shop, including sweets, t-shirts, and the beers themselves.

The most famous is the iconic Kessel Hall, which is adorned by a giant beer vat sure to catch your eye. Also worth checking out is the ‘Lilac Hall,’ who serve jingisukan soaked in a mouthwatering secret sauce.

Further along, at the refined ‘Garden Grill,’ you can feast on exquisite delicacies of top-quality lamb, seasonal seafood, and fresh vegetables. There are also private rooms with terraces attached for the complete high-class experience.

In addition to the 6 varieties of beer served across the halls, the Garden Grill boasts an additional 6 draft beers all worth trying. For those who want to conquer them all, we recommend spending your time here! 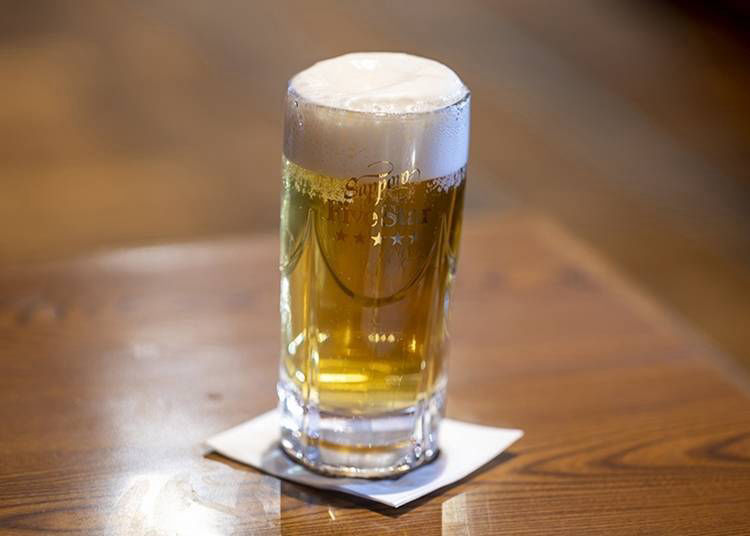 Don’t miss out on a glass of ‘Sapporo Five Star,’ the Sapporo Beer Garden’s limited edition brew! (ABV: 5.5％). In production since 1967, the soft sweetness, deep bitterness, and nourishing fragrance has spawned a dedicated fanbase. We recommend pairing it with a set of meaty jingisukan!

Nearby Subway Bus Center Station, 1.4 kilometers from the Sapporo Garden Park, is the eye-catching Sapporo Factory and the Sapporo Kaitakushi Beer Brewery.

Originally established in 1876, pioneering Japanese brewers lay down the foundations for Sapporo Beer through the creation of authentic German brews, which is considered to be the origin of beer production in Japan.

Nowadays, the Sapporo Kaitakushi Beer Brewery strives to recreate this original taste for today’s drinkers, allowing your taste buds an exciting journey back in time. 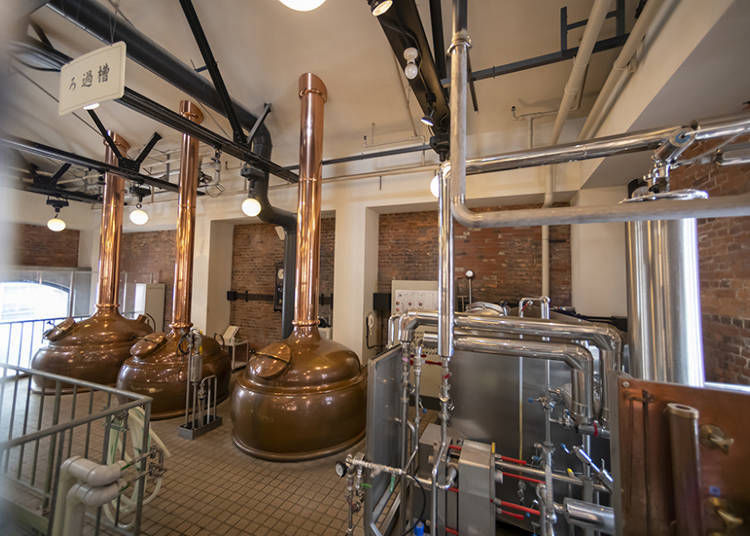 At the entrance to the Sapporo Kaitakushi Beer Brewery is a free-to-enter information hall. Filled with real beer vats, filtration tubs, and informative photos depicting each aspect of Japanese beer, beer-fans and history buffs alike will be enthralled!

*Currently, due to the spread of Covid-19, business hours have been altered. Details can be found on the official Sapporo Beer website.

*The information in this article is current as of February 2021. Please check official websites for the latest information.

Sapporo Beer Museum: Expand your beer knowledge, have some stellar brews and eat some hearty cuisine

Sakuraco Snack Box: Take your taste buds on a trip around Japan!