One of the enduring images of Japanese food is of course sushi, which in a way you could call one of the world’s first fast-foods! Its roots lay in how fermented rice was great for storing salted fish, and from this tradition of storing fish with rice chefs started serving up fresh fish on rice in the Edo Period (1603-1868). The final perfected version of sushi is believed to have been dreamed up by a chef in 1824 in Ryogoku, Tokyo, and it was popular with riverside workers. Normally served at street stalls, it was certainly a larger portion of rice and fish then you see today. It was quite a different world to the modern version where sushi is popular in expensive restaurants.

However, regardless of whether you are going to an expensive sushi restaurant or a more modestly priced one, a sushi restaurant isn’t going to help if you are hungry but are a vegetarian. However, sushi doesn’t necessarily mean just fish on rice. For a visitor to Japan sushi is a major attraction and actually there are many vegetarian and vegan options available. To help make your food tour absolutely perfect we have brought together some of these.

Nigiri sushi, where the sushi chef takes a ball of vinegared rice and presses it into the shape of a small log, is one of the most common types of sushi. The sushi chefs can prepare these to exactly the same size and weight just by touch, without any weighing scales. The fewer touches by the fingers, the fresher the sushi will be, and master chefs can prepare these edible gems in just a few precise moves. 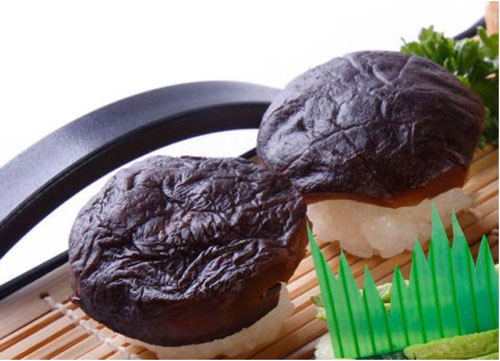 Shiitake is a type of mushroom which has a strong and savory taste, and is often dried to be used in flavoring soup stock. When used in sushi, the mushrooms are usually lightly flavored with salt or soy sauce and lightly flamed to enhance the fragrance. The juicy texture and rich taste of shiitake mushrooms makes this vegan sushi an extremely satisfying morsel. 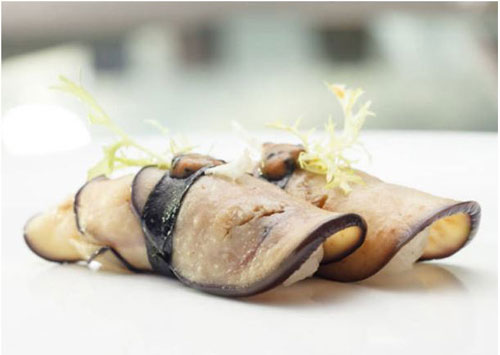 Eggplant in Japanese is nasu and is a common item in restaurant menus because it is so tasty. This is a special sushi that most visitors to Japan miss out on, but which is a must-try for anyone regardless of their dietary requirements. Eggplant sushi is served either grilled, for a melt-in-your-mouth texture, or pickled for a more chewy and tangy flavor. You can even try this as tempura eggplant served with grated ginger, it’s very popular and of course delicious! 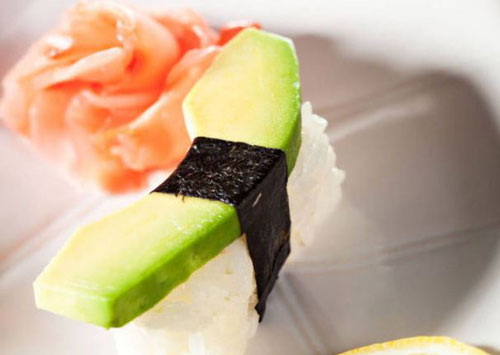 Avocados have quickly gained popularity in recent years, so much so that prices around the world have started rising—and here in Japan it is also popular in sushi! In nigiri form, the rice comes topped with a slice of avocado, usually lightly seasoned with salt and fastened together with a thin strip of nori seaweed. The mild, creamy flavor of avocado sushi makes it a popular form of vegetarian and vegan sushi. 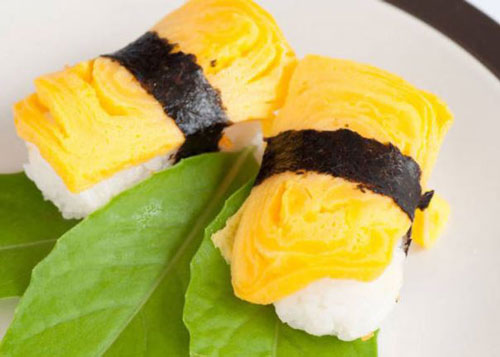 You might not think that eggs go naturally together with sushi, but actually they do. Tamagoyaki is a fluffy and slightly sweet omelet popular in Japanese cuisine. Tamagoyaki nigiri is a rice ball topped with a slice of omelet, this is then usually wrapped with a thin slice of seaweed. It is good to clarify if dashi has been added to the omelet, and some restaurants may offer to make the tamagoyaki sushi for you without dashi upon request.

Maki-zushi itself isn’t a vegan or vegetarian sushi, but when you have control over the ingredients then it can become perfect for anyone, regardless of their dietary requirements. The name literally means rolled sushi: first a large square sheet of seaweed is laid on a bamboo mat, then rice is spread out over it, and then toppings can be added – these literally can be anything including ingredients mentioned above and below in other sushi. Once it is finished then the mat is rolled up to form a firm sushi roll. This roll has to be cut carefully sideways. 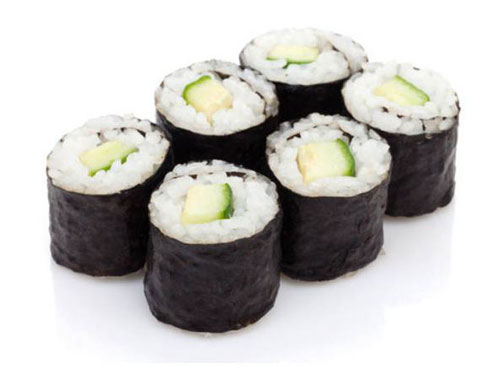 Kappa maki-cucumber roll-is an easy to find sushi for vegetarians and vegan sushi-eaters, it simply has a slice of cucumber wrapped in a thin roll of rice and seaweed. This is a popular starter or palate cleanser for the regular sushi diner and can be found in all good restaurants and even supermarket aisles. 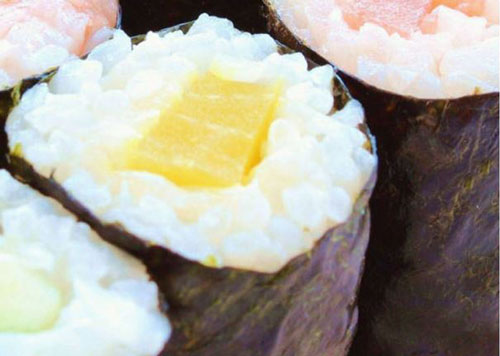 Shinko is a generic term for pickles, and is a popular order for a change in taste and texture. Takuan is a pickled radish, usually bright yellow or brown in color, and has a crunchy texture and somewhat tangy taste. This is a tasty and refreshing vegan sushi option for all. 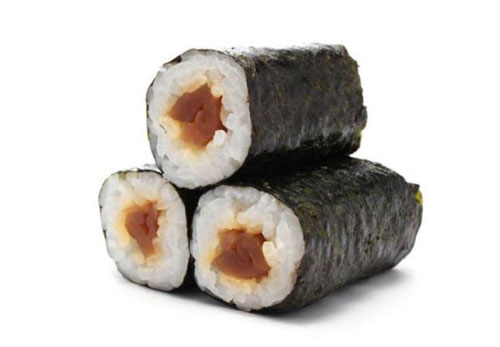 Kampyo, or pickled gourd, is thought to aid digestion, and so is often ordered at the end of the meal. The gourd is pickled brown and has a taste that can be described like a sweetish soy sauce. 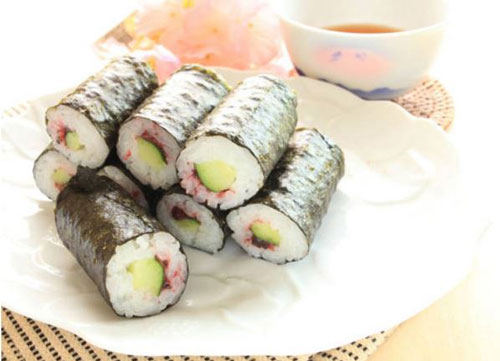 The combination of ume (Japanese pickled plum) paste, refreshing shiso (perilla herb) and sweet cucumber is another staple vegan sushi order that serves as a palate cleanser in the middle or to end off the meal.

Other Types of Vegan & Vegetarian Sushi 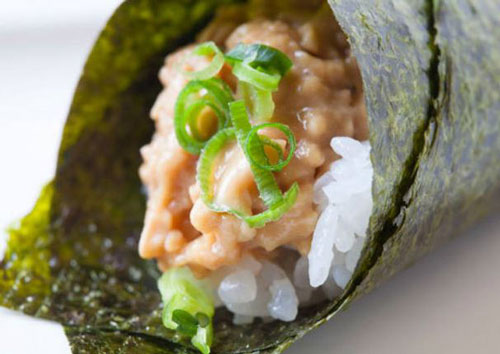 Temaki means “handroll”, and as the name suggests, is rolled by hand. The sushi chef folds a small rectangular sheet of seaweed with vinegared rice and various fillings and, at an over-the-counter sushi restaurant, hands this by hand to the customer. This is not tightly pressed like the maki-zushi and the rice retains a fluffy texture. Natto temaki is a handroll of natto, or fermented soybeans. Natto has a sticky texture so may be a bit messy to eat but it is popular for its taste and health benefits. 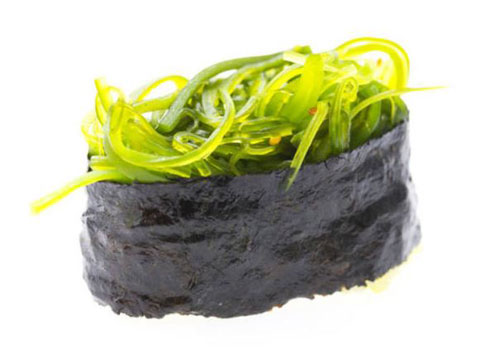 Seaweed gunkan-maki (“battleship roll”) is a flavorful and nutrient-rich sushi option for vegans and non-vegans alike. Wakame or seaweed salad is dressed with soy sauce, mirin, sesame oil, sesame seeds and red chili, then piled on top of sushi rice and secured with a strip of nori seaweed. 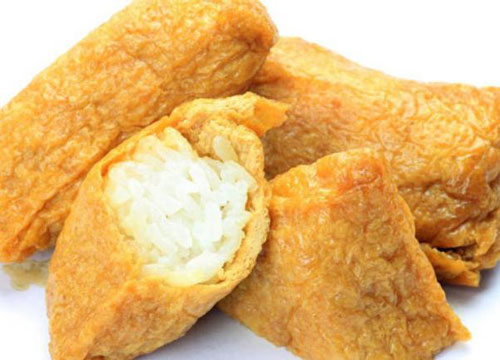 Inarizushi is made of a fried and sweet tofu skin pouch that is filled with vinegared rice and sometimes sesame seeds is sprinkled on the top or mixed in the rice filling. It is often offered to the Gods at shinto shrines, as it is said to be a favorite snack of the fox, the messenger of the gods. 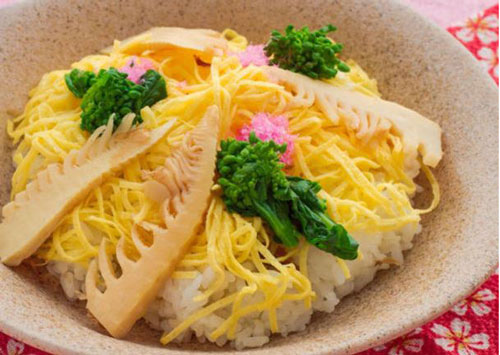 Chirashizushi means “scattered sushi”, and is Japanese dish of sushi rice topped with various ingredients. Takenoko chirashizushi is sushi rice scattered with bamboo shoots (takenoko) that have been simmered in a broth. Takenoko is typically available during the spring season, and when simmered, the bamboo shoot becomes soft, succulent and flavorsome. As this broth may contain fish-based dashi, or be topped with bonito flakes (shaved dried fish flakes), if you’re vegan or vegetarian, it’s best to check.

Sushi will always have the enduring image of being fish on rice; so many people will automatically think that they will just have to miss out on sushi when they visit Japan. However, sushi isn’t just fish as it can be made with other ingredients which can be found on restaurant menus through the year. Japan is a very seasonal country, for example there are cherry blossom flavored foods during hanami, and vegetarian sushi can be seasonal too – which allows you to try different sushi throughout the year which other fish eaters will miss out on! When you look at the menu if you look very closely you will find sushi that you can eat, and if there is something you want but don’t want bonito used in the sauce or to have flake toppings, then just ask. There are so many different sushi joints in Tokyo, and across Japan, so it is worth having a browse online to see what is on the menu for each one.

Spotlight on 6 of Japan’s most popular types of seaweed