More people eat breakfast for health after the pandemic started

More people eat breakfast for health after the pandemic started

30 percent of consumers began eating breakfast more often as a result of the current situation, and half of the respondents who started doing so said they ate breakfast six to seven more days per week. 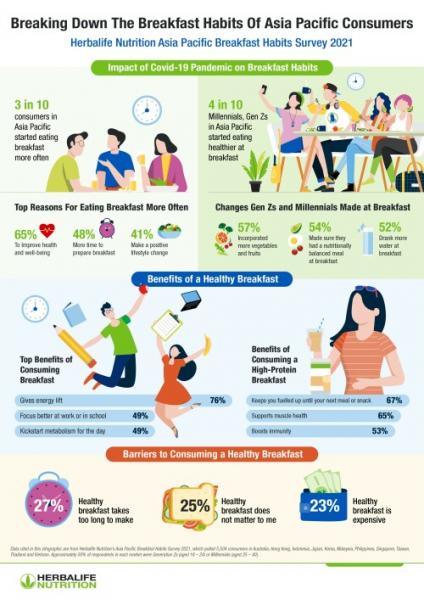 “The pandemic has sparked noticeable changes in the breakfast eating habits of consumers in Asia Pacific,” said Stephen Conchie, Senior Vice President and Managing Director, Herbalife Nutrition Asia Pacific. “With growing awareness of the need for a healthy and nutritious breakfast to support their well-being, many of them – including Generation Zs and Millennials – went from not eating breakfast before, to now consuming breakfast on a daily basis. This marks a step in the right direction to foster positive nutrition habits and lay the foundation for them to lead healthier lives.”

Two in five (37 percent) Generation Zs and Millennials in Asia Pacific began eating breakfast more often as a result of the pandemic, higher than the region’s average of 30 percent across all age groups. The change in breakfast habits among Generation Zs and Millennials was particularly evident among those in Thailand (65 percent) and the Philippines (53 percent), with over half of consumers aged 18 to 40 now consuming breakfast more often.

When asked about the reasons for consuming breakfast more often, the top reasons given by Generation Z and Millennials were similar to the average Asia Pacific consumer. These include:

Increased Awareness of the Importance of Nutrition among Asia Pacific Consumers

In the Asia Pacific Breakfast Habits Survey conducted in 2019 by Herbalife Nutrition, nutrition was of a lower priority to consumers, ranked after taste and convenience.

When asked about the personal benefits of consuming breakfast, respondents cited having an energy lift in the morning (76 percent), kickstarting their metabolism for the day (49 percent) and helping them to focus better at work or in school (49 percent) as the key advantages.

In addition, the majority of the region’s consumers (73 percent) also saw value in consuming a high-protein breakfast:

While the majority (74 percent) of respondents believe that it is important to have a healthy breakfast on a daily basis, and intend to consume healthier breakfast options (85 percent), a minority continue to face barriers in making healthy breakfasts a key part of their daily routine.

Among those who do not intend to consume healthier breakfast options, the main reasons were:

When asked about their willingness to spend for their ideal breakfast, the majority were unwilling to spend more than the equivalent of US$5 per meal.

“A healthier breakfast does not necessarily take too long to make,” added Conchie. “There are a wide range of fuss-free breakfast options which include more nutrients, yet are easy and quick to prepare. These will provide consumers with energy to start their day whilst improving overall well-being in the longer term.”

Cutting down the evil breakfast ingredient

Get your greens!: Try a healthy spin on a breakfast favorite

How DHA monitors the spread of health outbreaks

COVID-19: lifestyle tips to stay healthy during the pandemic