It wasn’t until toward the end of the Muromachi period (1336 to 1573) that tea, or ocha, would solidify its place in Japanese food culture.

According to major Japanese food company Nagatanien, as tea became widely available, consumers began to try tea poured over rice and as the dish became popular, it would adopt the name “ochazuke” or “chazuke” (rice with tea).

It’s a simple dish. And it is that simplicity which allowed it to quickly become a comfort food after a night of drinking or as a hearty breakfast at home. Some love ochazuke so much, it has been elevated with different garnishes and toppings, both at home and in restaurants.

NODO, a café which opened last October near Sunabe Seawall, adheres to its “Tea, Relax, Healthy, and Beauty” concept. Though it was early afternoon and the café was full of ladies having tea, the calm and relaxed atmosphere melted away any concerns I had. Its fancy interior with its wooden shelves, sleek tables and soft leather sofas, was just as polished, yet cozy, as its Instagram account photos indicated. 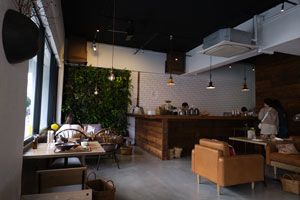 I happened upon NODO on a search for a good cup of tea, and I wasn’t disappointed with its variety. Although I was looking forward to the standard roasted green tea, ginger tea or orange hibiscus tea, it was their signature item — ochazuke — which convinced me to step inside.

I went for their Umami Dashi Chazuke set (1,500 yen or about $14), which includes a salad, and rice bowl topped with kelp, shiitake mushrooms, green perilla leaf, and chili threads. The set had another bowl, which was meant be used to mix rice, dashi (soup stock), and vegetables and other ingredients which were served up on a plate together. A few pieces of chicken breast were sitting in the bowl, waiting be joined by other food.

I also opted for the drink and cake set for an additional 400 yen.

When my ochazuke set arrived, I was pleased with its neat presentation, similar to dishes served during a traditional tea ceremony, or Kaiseki Ryori.

Kaz, an assistant manager of NODO, delivered my tray and indicated I should pour a little bit of the dashi in the accompanying tea pot in the empty bowl and enjoy the taste with the chicken first. After I tried the savory meat, he suggested adding a little bit of rice and some of the vegetables for a richer taste.

“I recommend that you enjoy this as a mini ochazuke each time,” kaz said.

“Umami (savory taste)” was the word kaz often used to describe the dish. True to his explanation, the soup stock had a mild but rich savory taste, which was extracted from chicken farmed in Itoman City, kelp harvested in Rausu in Hokkaido, and flying fish caught in Nagasaki, according to the café’s website.

Every time I mixed rice and ingredients with the soup stock, the dish created many variations of colors, textures and umami. The sesame sauce served on the side added a nice kick when added to the soup stock.  Of all the combinations, the takana and umeboshi were my favorite.

Soon, my ochazuke was all gone, but it was time for dessert. I ended this lunch on a high note with a refreshing cup of hot green tea and a small slice of creamy okara (soy pulp) cheesecake. The cake’s restrained sweetness was a delight.

As I sat and reflected on the delicious meal I had just devoured, I wondered: “Is it okay to call a dish ochazuke if I pour soup stock not tea over the rice?”

Nagatanien notes that the method of eating tea and rice together has its roots in suihan (rice with water) or yuzuke (rice with hot water), which were consumed since the time of the Heian period (794 – 1185 or 1192).

Plus, while ochazuke is mostly consumed with tea in the Kansai area, having it with hot water or soup stock is commonly seen in other areas, according to Nikkei newspaper’s Nikkei Style website.

I enjoyed my meal at NODO and had no clue ochazuke had such a rich background. And now that I’ve had it once, I’m ready to seek out other variations of this ancient delicacy. Taste the history for yourself and some great tea, too, at NODO today! 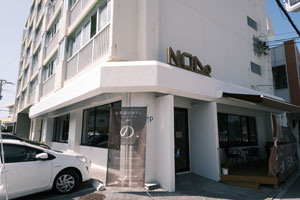 Taste of Okinawa: Unwind at Transit Café near Kadena AB