I have been thinking a lot about end of the year culinary rituals and traditions recently. I keep pondering why when I first experienced Osechi (Japanese New Year’s cooking) as a young bride (literally only married for 2 weeks) in Tokyo all those years ago, it so captivated me to this day? In a way, it was and remains a culinary bridge and celebration of the two cultures that I deeply love: Japan and the United States. I love preparing, enjoying and celebrating Osechi as a special year-end ritual and annual tradition with my daughter. We look forward to it every year, from planning the menus, to shopping together, to cooking and of course to the eating! I really love the tradition of getting all your shopping and most of the cooking done in advance, so that this holiday can be enjoyed with your family in a relaxed and leisurely manner.

Traditionally all the dishes that make up the osechi panoply are precooked and put into special four-tiered lacquerware boxes called jubako by New Year’s Eve. New Year’s festivities run from January 1 to 3. During that time no cooking is done – just more non-perishable food is added to the jubako as family or guests drop by. Instead of rice, mochi, or pounded rice cakes, are eaten. If you are lucky enough to find fresh mochi at the end of the year, by all means try it! Mochi can be an acquired taste, and the real trick is never to overcook it as it will disintegrate.

While my osechi of today is stream-lined and much simplified here in the Bay area, it is no less significant and still filled with osechi classics that we love. I bring out the special over-sized ozoni soup bowls, and jubako that I have, and we will pick out new chopsticks to use during our celebration. Every year, I make something new for my daughter to try and usually enjoy!

Here are two of my favorite osechi recipes to try and enjoy this season. They are both fun, easy to make and very delicious. 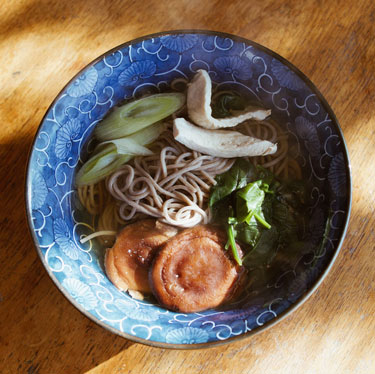 In Japanese culture, soba (buckwheat) noodles have always been seen as a “happiness” food, served on special occasions. It is traditional, too, when moving into a new house to greet your neighbors with hikoshi soba (moving soba). This involves a play on words, as soba also means “close” or “near” – like neighbors.

Another soba custom is Toshikoshi Soba (year’s-passing soba), supposed to be the last food to touch your lips on New Year’s Eve. The tradition is so established nationwide that often reservations are needed even for buying the freshly made soba to cook up at home. One year I attempted to make my own: working with fresh buckwheat flour proved extremely hard, but my toshikoshi noodles won nods of approval from my Japanese family even though, without the special chef’s knife used by soba cutters, they were a trifle thick. 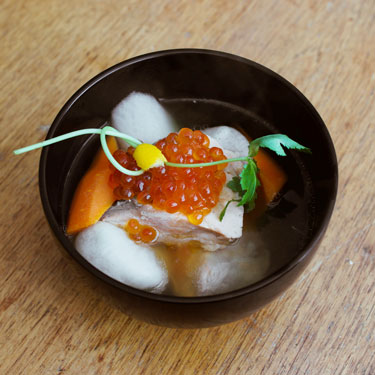 Zoni is a Japanese regional soup and can even differ house to house and includes pounded toasted rice cakes (mochi), chicken or fish, and vegetables served separately after gorging on the many foods in the jubako. It is usually the only hot dish served and is an integral part of the meal. Matsumae Zoni is a specialty of Hokkaido, and one of my absolute favorites to make for Osechi, aka Japanese New Year’s. It will definitely be on our menu on January 1st.

How to make Kombu Dashi Stock:

Take a 6-inch piece of kelp (kombu), wipe lightly with a damp cloth and put into a pot with 6 cups water. Bring to a boil and remove kelp. Add a generous 3/4 cup of dried bonito shavings (katsuobushi) and boil for one minute. Turn off heat and after 2 minutes, strain.

Both of these recipes can be found in my book, “The Wonderful World of Osechi: Japanese New Year’s Recipes” 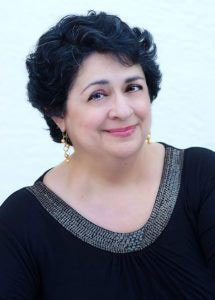 Lucy’s long love affair with Japan started when she was 15, when she ended up visiting Japan for the summer. It truly was love at first sight. She studied Japanese in Hiroshima, stayed in Tokyo’s Olympic village and lived with a Japanese family in Okayama. Returning to the States, she told her family that she wanted to go back to Japan and it would be her major in college. No one believed her! And yet, that’s exactly what happened. She spent her junior year abroad in Tokyo, attending Waseda University and living with the Mitsui family. She was their 21st foreign daughter. She got her degree from USC in Japanese and Japanese culture. Eventually, she married a Japanese national and ended up living in both Tokyo and Nagoya. In total, she has lived over 13 years in Japan. Japan remains part of her heart, even though she is now living in the Bay area.

Her culinary life in Japan included being a restaurant critic, a food historian and writer, the editor of Gochiso-sama!—her culinary newsletter on Japanese cuisine, and the owner of her own cooking school, Lucy’s Kitchen.

She continues to love Japanese food, and now cooks for her college-aged daughter, who is equally obsessed with Japanese food, especially street foods like Yakisoba, Okonomiyaki and so on.

She started her Japanese food blog, Thanks for the Meal: Savoring Japan's Culinary Treasures (www.thanksforthemeal.net) over 3-1/2 years ago.  Her deep love of Japan has expanded and grown to incorporate not only nourishment for the body but nourishment for the mind and spirit through her Zen Coaching practice (www.lucyseligman.com), using energy tools and an exploratory process that empowers her clients to unlock the best version of themselves. All photographs by Lucy Seligman.

Taste of Okinawa: Toshikoshi Soba for a Happy New Year

Did you know?: New Year’s one of Japan’s longest holidays

Have a happy (and sticky) new year with Okinawan Muchi

Taste of Okinawa: Toshikoshi Soba for a Happy New Year

Taste of Japan: Difference between ramen and Okinawa soba noodles