You can’t even talk about – much less taste – Okinawan food without letting soybeans, or a soy-based delicacy, cross your lips. Soybeans really are “the magical fruit” here where traditional wisdom transforms them into a myriad of foods with a variety of colors, shapes and smells.

Dubbed “meat of the field” for their hardy culinary and nutritional values, soybeans have a long and storied history throughout. Common soy foods range from soy sauce, as ubiquitous in and outside of Japan as ketchup in America, to “natto” (fermented soybeans) the bane of most foreigners due to the slime and smell. There’s edamame, tofu, miso, soy milk – the list is endless.

The average Japanese eats 13.5 pounds a year, or 0.59 ounces a day, of soy, according to the Ministry of Agriculture, Forestry and Fisheries. While most eat one to one-half servings per day, other surveys show “the upper range among older Japanese – who would be expected to eat a more traditional diet – is about three servings,” blogs dietitian Ginny Kisch Messina at www.theveganrd.com.

Soybeans are believed to have first been cultivated in Japan about 2,000 years ago. According to the Ministry of Agriculture, they began appearing as a regular food on Japanese tables during the Kamakura Period (1185 - 1333).  After Buddhism caught on in Japan, killing animals and eating meat were frowned on. (Eating meat was even banned a couple times throughout history.) Enter soybeans.

High-protein soy foods such as natto and miso became mainstay meat-substitutes combined with rice to satisfy appetites. They were also used as preserved foods for samurai warriors heading off to battle. These days, soybeans are fried, boiled, steamed or fermented into so many foodstuffs that it would be almost impossible to find a dining table or lunch counter in Japan without one.

Among younger Japanese, however, soy product consumption is starting to decline, owing to the increase of diverse foods from around the world, according the Ministry of Agriculture. Japan’s youth would be wise to follow in the dietary footsteps of their elders.

So, don’t be put off by first appearances – or even smells. Dig in to the heart of healthy Okinawan cuisine – try all those tofus, munch on edamame, sip some soy milk and don’t say no to natto (well, at least not without trying it).

Breakdown of the bean 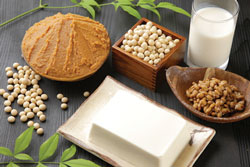 About 932,000 tons of soybeans were consumed as food by people in Japan in 2012, according to the Ministry of Agriculture, Forestry and Fisheries most recent data. Only 25 percent of it was produced domestically (65 percent came mainly from the U.S., one of the world’s one of the largest soybean producers). Japan’s soybean consumption breakdown that year was:

*By comparison, the U.S. consumed over 21 percent of the world’s supply in 2009, and Japan less than 2 percent. But it’s estimated that 99 percent of U.S. soy is used for livestock feed; most soy consumed by Americans is in by way of oil and processed foods such as margarine, mayonnaise, etc. A recent Soyfoods Association of North America survey showed only 31 percent of Americansa ate “soyfoods” like tofu and soymilk; 26 percent said they never do.

According to Standard Tables of Food Composition in Japan, 100 grams (about 3.5 ounces) of dry soybeans contain the following:

There’re soy many ways to enjoy these beans 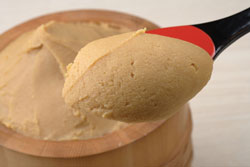 Miso is popular indispensable seasoning that you would find in any Japanese kitchens along with soy sauce. Miso is produced by fermenting soybean, rice, barley or other grains with a type of fungus known as koji (aspergillus oryzae) in Japan. The fermentation process can take anywhere from a few month to a couple of years to complete and the end result is a red, white or dark brown colored paste with a buttery texture. Typically, it is the darker the color of the miso, the saltier and stronger the flavor.

Like most probiotic foods, miso should only be added to soups or other dishes just before they are removed from the heat. This is to preserve the live koji cultures in miso and also to retain as much nutrients as possible.

Low salted miso is getting popular in the market so that salt-conscious consumers can partake of the many health benefits. 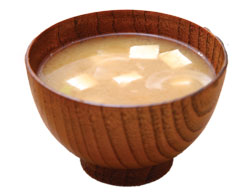 Health Benefits
Besides containing a good amount of readily absorbable protein, miso is also high in vitamin B12. It also supplies trace levels of minerals such as zinc, copper and manganese which are crucial for good health. 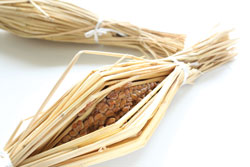 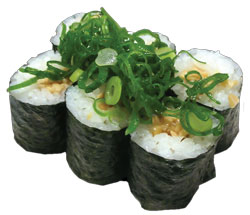 Natto is probably one of Japan’s most unique traditional “healthy” foods. It is highly nutritious and rich in protein. Japanese love to eat natto with soy sauce or, if you like, try adding raw egg and green onion on top and mix it all together in a bowl of rice.

For centuries, natto had been made using a specialized fermentation process that adds the beneficial bacteria “bacillus natto” to soybeans. The fermentation is said to enhance the nutritional value of the soybeans and it produces a unique flavor and texture. The slimy texture is the result of this natural fermentation process.

Health Benefits
Like all soybean products, natto is high in complete protein. Studies have found that natto is also rich in vitamin K which is essential for healthy blood clotting as well as preventing bone fractures and osteoporosis. Natto also contains an enzyme called “nattokinase” which has been known to dissolve blood clots in lab animals. It is also believed to help decrease heart attacks, strokes and poor circulation. 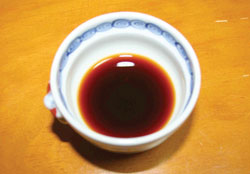 Who can imagine sushi without soy sauce? Japanese love soy sauce. There is no Japanese restaurants that does not have soy sauce on the table.

Soy sauce is made from soybeans by being steamed and mixed with roasted wheat and salt. “Koji,” a type of fungus, is added for the fermentation process, which takes about 6 to 12 months. Then the mixture is pressed. During the pressing, “moromi” (the fermented mixture of soybeans, wheat, koji and salt water) is pressed through cotton bags to extract the raw soy sauce. Then the soy sauce is pasteurized, bottled and sold. Recently, low-salted soy sauce has become popular with those concerned about eating too much salt. 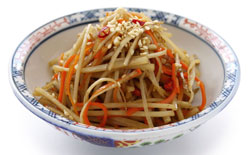 Health Benefits
Despite the high sodium content, it is said that soy sauce helps digestion and helps lower cholesterol. Some believe that it is different than other high-salt foods with respect to blood pressure and cardiovascular health.

Dishes:
As a seasoning or condiment, it puts the “Japanese” in Japanese food. 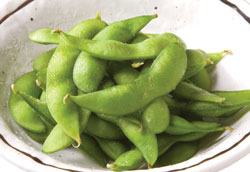 When you harvest soybeans when they are young, they are eaten as edamame. Eadamame is often served at “izakaya,” or Japanese Pubs as a popular finger food to go with alcohol. You can also purchase edamame fresh or frozen at supermarkets. If you want to buy fresh edamame, the harvest time in Japan is June through September.

Cooking edamame is pretty easy: Wash some fresh edamame with running water and put it into boiling water with little bit of salt for 6-7 minutes. Take it out, drain and cool. You should not wash it with water after cooking it. Use a fan to cool it down and the salt will soak into the edamame. 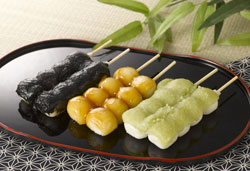 Health Benefits
Edamame is low in calories and fat, and high in protein. In addition to vitamins, it has such minerals such as iron and calcium. It is said that edamame helps lower the risk of cardiovascular disease. 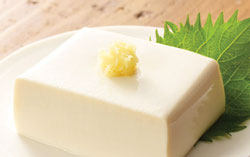 Tofu is made from soymilk curds. So it is a bit like a cheese made from soy instead of animal milk. The curds are pressed into blocks and can be made into different textures.

There are two types of tofu; “kinu” (silk), and “momen” (cotton). As the name suggests, it depends on whether the soy milk is strained thorough cotton or silk cloth. Kinu tofu is softer and momen tofu is firm. 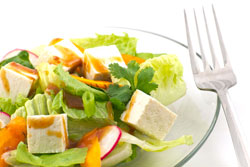 Health Benefits
In addition to protein, tofu contains iron, zinc, calcium and other minerals. It is also said that tofu helps to decrease the risk of heart disease. 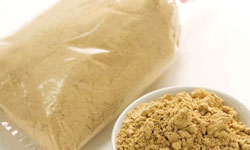 Kinako is roasted soybean powder. It’s often used in mochi and other Japanese sweets. It is considered a diet food and is popular with some young women. The current trend is to make a milk or soy milk shakes with kinako powder. 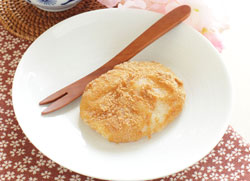 Health Benefits
Kinako contains all the vitamins and minerals found in soybeans including soy isoflavone, soy saponin, and soy lecithin. It is said to help prevent obesity.

How to make homemade miso

It is common that many Japanese make miso during January to March because it is believed that the low temperature can help fermentation process slow and make miso richer taste. If you make miso during this time of the year, it takes approximately 7 to 8 month to complete fermentation for miso. I have made my own miso last year for the first time in my life, and it came out very tasty. I really enjoyed making it even though you never know how it will come out for a long time. It is almost like taking care of your plants and looking forward to seeing bloom it. 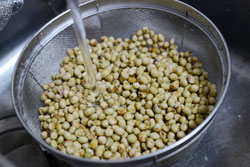 Soybeans to enough water (3 to 4 times amount as soybeans) over night. 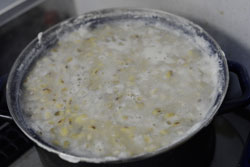 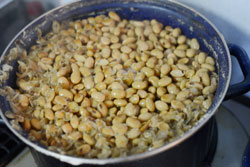 Slowly cooked soybeans in the large pot until soybeans get soft for 5 to 6 hours. Make sure soybeans to get soft enough to break as you pinch between thumb and index finger.

Step 3
Take out soybeans into sieve and save the cooked water. (you will use the water later) 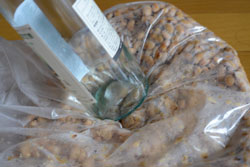 Cool it down a little, and then mash, mash and mash! It is easier to use a masher. I put it into a plastic bag and used a bottle to mash and then I stomp on the bag to mash more. It is easier while soybeans are still warm/hot. 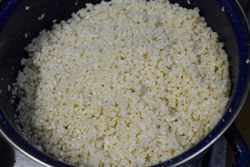 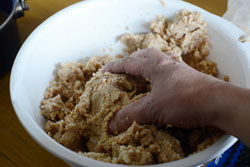 Mix mashed soybeans and #5 very well. Add the soup of #3 and adjust the hardness, just about same as hamburger pate’s hardness. 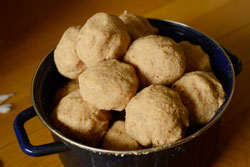 Make miso balls to take out air when you put into a pot.

Step 8
Throw those balls into a big clean pot so that you can take out the air. 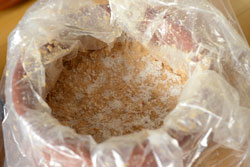 After you finish putting all the balls, make top surface flat and add 50g salt on the top. 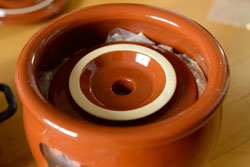 Cover the surface with a flat object and put the weight (about 2kg) on top of it. 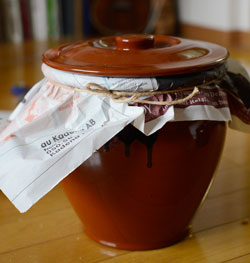 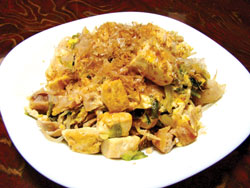 The Okinawan local’s favorite tofu champuru is so easy and yet tasty. It is similar to goya (bitter gourd) champuru, although this case tofu is the main element.

The season of miso making in Japan