Have you heard of Japan’s furikake? In Japanese, furikake means "to sprinkle over." Furikake are seasonings of various dried ingredients such as egg, seaweed, or sesame, made to top a bowl of plain white rice.

In Japan, it is common to enjoy rice just as it is while the West knows it as a side to go with something else, and this is why furikake is rather prominent in Japanese daily life. A simple bag of furikake rice seasoning adds a flavorful kick to every bowl, inspired by dishes and ingredients such as eggs and seaweed, sukiyaki, and cod roe!

Try this fun way to enjoy rice for yourself with our 10 recommended furikake rice seasoning choices! 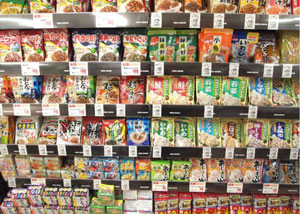 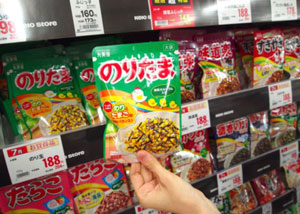 Marumiya is one of the biggest names when it comes to furikake, boasting its own extensive “furikake series.” The Noritama flavor combines nori (dried seaweed) with tamago (egg) and is the most popular long seller among colorful furikake products.

Japanese people immediately recognize the characteristic taste of the subtly sweet egg granule and the aromatic shredded seaweed, recognizable from the very first bite ever taken.

The nori is a blend of seaweed from various production areas while the egg granule also features two different kinds of flavors – for what seems like a simple furikake, there is a lot of commitment inside the package.

Since its release in 1960, the Noritama furikake rice seasoning has been renewed a total of eight times, reducing the salt content and the seasoning according to changes in both the tastes and lifestyle of modern consumers.

It’s a famous best-seller that ranks high in popularity for decades! With a slow, careful evolution in accordance with the taste of the time, Noritama provides a classic, satisfying flavor to enhance your rice with.

The “Yukari” furikake of red shiso (beefsteak plant) is a staple seasoning on tables all around Japan. It is characterized by its vivid color and unmistakable aroma, and the more Yukari red shiso varieties the company behind this famous product develops, the more commitment to quality goes into the process.

Since Yukari’s release in 1970, there have been a variety of flavors on top of plain beefsteak plant: ume (Japanese apricot), sesame, seaweed, ginger, and so on.

Especially “pen-type” furikake has gained a lot of attention, serving the sprinkles in a literal pen to be shaken out, easy to carry and fun to use.

Yukari is also a female name in Japan and carries the meaning of “fortune” and “destiny,” coming from the ancient belief that purple grass is something auspicious.

3. Tarako Ochazuke: The Original Flavor of Rice with Tea

Ochazuke is a traditional Japanese dish that features hot tea, broth, or water being poured over a bowl of rice topped with various ingredients.

In 1952, a company called Nagatanien developed an instant ochazuke, instantly successful as a simple and quick dish.

The Tarako Ochazuke is based on a soy sauce infused with the umami flavor of scallops and bonito while also featuring little arare rice crackers made of rice and seaweed, the staple ingredients of ochazuke.

Of course, the tarako (spicy cod roe) flavor is wonderfully rich and brings a nice balance to the mix.

4. Pokémon Furikake Mini Pack: Great for Lunch Boxes, Not Only for Kids!

These handy little bags are perfect for lunch boxes. One pack of Marumiya’s Pokémon Furikake Mini Pack is just right for one serving of rice.

It is an assortment of 20 individual bags that comes in four different flavors that are especially beloved by Japanese children: egg, salmon, bonito soy sauce with finely chopped bonito flakes, and vegetables.

Different Pokémon are printed on the little bags, so this flavorful rice topping is a highlight for fans of all ages! Extra calcium is added as well, giving you a nutritious boost!

Another classic dish is wakame gohan, blending wakame seaweed with rice.
Marumiya’s “Mazekomi Wakame” furikake series lets you enjoy this staple rice dish with a simple yet flavorful bag. The rich umami flavor is rich in the ingredients, characterized by being delicious even if the rice has cooled down.

The sake (flavor) has received an upgrade, adding even more salmon to the mix and thus making for a richer, saltier umami experience.

In general, the Mazekomi Wakame series comes in 24 varieties, including limited and premium flavors such as bamboo shoots or grilled eel.

6. Otona no Furikake Wasabi: A Flavor Geared towards an Adult Palate

Nagatanien created a furikake series for the sophisticated palate of adults called “Otona no Furikake,” looking at data on which flavors sharply declined in popularity among people older than 12 years.

This has lead to a bag that pursues the crisp freshness of nori seaweed by using freeze-dried seaweed, enhanced with carefully chosen ingredients that ranked high in popularity among adults such as wasabi, a flavor that children tend to stay away from.

That’s what differentiates the Otona no Furikake series from other rice seasonings.

Since its launch in 1989, it has been a large success that managed to overturn the common belief of the time that furikake are primarily for children.

With flavorful bonito and plenty of seaweed added to the wasabi taste, this seasoning is positively addictive.

According to Nagatanien’s own research, the three flavors of bonito, sockeye salmon, and wasabi have earned a statistic of being liked by 99% of people for three consecutive years.

Launched in 1963, Marumiya’s “Sukiyaki” furikake celebrates its 55th birthday in 2018. Sukiyaki is a beef hot pot and one of the Japanese dishes that is fairly well-known around the world.

When this Japanese rice seasoning launched, beef was fairly expensive, so this product was developed to let people enjoy the flavor easily and affordably at home. It was the very first meat furikake back then and the beef flakes were even patented. To commemorate its 55th anniversary, the original packaging is on sale as well.

There’s hardly anyone who is not familiar with the Minions of the Despicable Me movies. These Minions are the stars of the “Minion Furikake Mini Pack” by Marumiya, a collaboration that makes for a wonderful souvenir for the little ones at home.

Egg, salmon, bonito soy sauce with finely chopped bonito flakes, and vegetables are the four flavors of this mix, especially loved by children. All of them hold back on saltiness and instead focus on a gentle flavor after the most recent renewal.

9. Mazekomi Wakame Shirasu: Rich Flavors of Both the Sea and the Land

This is another recommended furikake of Marumiya’s “Mazekomi Wakame” series. Shirasu are boiled young white sardines, sweetfish, or herrings that are often used as a topping for rice, tofu, and so on.

The back of the package of this furikake also features recipe ideas, such as adding the flavorful mix to pasta.

10. Mutenka Furikake Mini: No Colorings, No Preservatives, Good for the Body

These furikake are free of any additives and the set of 20 bags comes in five different varieties: ume with bonito, bonito, egg, small fish, and nori seaweed.

Tanaka Foods, the company behind this product, is a long-established manufacturer from Hiroshima, founded in 1901. It’s also a pioneer of furikake seasoning for a single serving, releasing “mini furikake” way ahead of the competition in 1975.

Without any colorings, preservatives, or other additives, one of these bags promises an authentic and natural flavor experience, completely relying on the taste and aroma of the ingredients alone.

Especially the rich sesame fragrance positively stands out. Even toddlers can enjoy this product without worries. 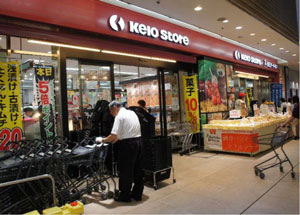 You can find a selection of Japanese furikake rice seasonings at most supermarkets and even convenience stores.

Keio Store is a supermarket chain that is all about the daily life around Keio Electric Railway’s lines. As of right now, there are 33 individual stores including the affiliates Kitchen Court and Keio Store Express, all of them loved by the locals.

We hunted for the best furikake rice seasonings at the Sakuragaoka Store, right next to Sakuragaoka Station, and also recommend its other diverse product selection, ranging from fresh foods to alcohol and miscellaneous goods.

Spotlight on 6 of Japan’s most popular types of seaweed