Eisai, a famous Buddhist monk who was a driving force to introducing tea from China to Japan in the late 12th century, said “Tea is a magic bullet.”

About 800 hundred years later, his words have been proven right by science.

A 2015 study by the National Cancer Center Japan (NCCJ) suggested that the more green tea people consumed, the more their mortality rate dropped. The study shed new light on green tea, which accounts for the majority of Japanese tea, and drew a lot of attention from the media. 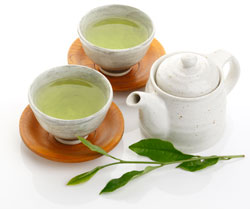 Unlocking the secret of green tea didn’t happen overnight. Prior to the study by NCCJ, there was a researcher who dedicated half a century to studying tea.

What does Omori think is the reason green tea is so good for your health? In a word - catechin. To explain catechin does for health, Omori cites adsorptive nature and antioxidant effect that the nutrient has.

“Thanks to its adsorptive nature, catechin encapsulates fat and prevents it from being emulsified,” Omori says. “In other words, catechin adheres to fat and makes it difficult to mix with water. As a result, it’s hard for fat to be absorbed into body. If it is not absorbed into system, fat will be released with stool.”

On top of adhering to fat, catechin can also act as a filter for germs in the body, and Omori cites another big benefit - the antioxidant effect.

“As we take oxygen into our system, active oxygen is created in our body, which can make our body ‘rusty.’ The antioxidant effect of catechin restrains such active oxygen, leading to an anti-aging effect,” said Omori.

As a result of its super-healthy results “Doctor Green Tea” recommends drinking green tea constantly. He said there is a limit to how much catechin a body can take in at one time, so you don’t need to drink large amounts, but by drinking it constantly you will continually have catechin in your system.

In 2016, Nikkei Good Day reported that both the production and consumption of green tea were dropping in Japan. The report was based on data provided by the Ministry of Agriculture, Forestry and Fisheries of Japan.

Although the report suggested a drop, many green tea beverages have come to be sold in other forms. Plus, sweets served with powdered green tea have become common.

Now, such plastic-bottled products or food with powdered green tea are popular items at convenience stores and cafes, starting with Starbucks’ Match Frappuccino, which blends green tea powder with milk. Omori noted such new ways of consumption have some merits.

“You don’t necessarily need to stick to traditional way of brewing green tea with tea leaves in a teapot,” Omori said. “I regularly drink Healthya, a brand of green tea sold in plastic bottle, for example. And powdered green tea allows you to absorb more nutrients than you would with tea brewed with tea leaves. In fact, 70 to 80% of nutrition is left in leaves.”

The professor also explained how he sprinkles the powdered tea on anything from kimuchi to natto. He even feeds it to his dog, who is healthy and in good shape at 15 years old, according to Omori.

The Japan Superfood Association (JSA) seems to agree with Omori on the benefits of powdered green tea.

“We think green tea should be consumed more as whole food,” said Ayumi Katsuyama, who the managing director of JSA.

“Matcha is already recognized as a super food in the states. But green tea, on the other hand, is not as versatile as powdered tea because it is normally consumed as tea leaves. If you brew green tea with tea leaves in a teapot, tea leaves will be wasted afterwards. To expand its market, we think green tea should be consumed more as a powdered food.”

The difference between matcha and powdered green tea probably needs some explanation.

Powdered green tea, in general, refers to sencha in powdered from. Sencha is the most common type of green tea.

Matcha, on the other hand, is powdered tencha, which is a special kind of tea leaf that is cultivated without direct sunlight and dried without being kneaded, according to Itoen, a major green tea company in Japan.

Plastic-bottled green tea, which people can easily enjoy, or powdered tea, which is versatile like matcha and casual like sencha, may be a game changer. But Omori noted that centuries-old traditional way of drinking tea has its own health benefits, especially for beauty care.

“Brewing tea in a teapot and drinking it at a veranda is very relaxing,” said Omori. “I can tell green tea’s relaxing effect is good for beauty care. As a good way to benefit from that effect, I would recommend brewing tea and enjoying it with several people.”

Green tea a key part of culture in Japan

Did you know?: The story behind Green tea on Okinawa

Green tea a key part of culture in Japan

Did you know?: The story behind Green tea on Okinawa