Too much to drink last night? Japanese have the cure!

Too much to drink last night? Japanese have the cure!

While superfoods contain the kind of nutritional value that make them, well, super, turmeric goes above and beyond. The plant, a superfood found right here on Okinawa, not only improves health, but it also helps cure hangovers.

Turmeric, or “ukon” in Japanese, is a kind of ginger, known as a spice for Indian curry, and in Japan, it is mostly recognized as a food that can help avoid hangover. This recognition can be ascribed to “Ukon no Chikara (Power of Turmeric),” a very popular beverage for hangover prevention.

Now, with many people turning to the power of turmeric to avoid nausea, headache or vomiting after a night of drinking, the benefits of the food are well known in the country. 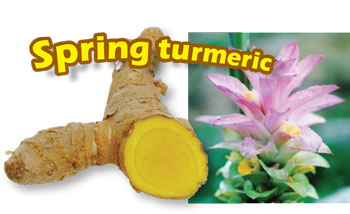 The Japan Superfood Association lists turmeric as a superfood that helps liver function and the support system in dissolving and getting rid of cholesterol. Ayumi Katsuyama, Managing Director of the association, explained it is a specific kind of turmeric that played a part in the popularity of the food.

“There are roughly two kinds of turmeric to be noted: Haru Ukon (“spring turmeric”), and Aki Ukon (“fall turmeric”),” Katsuyama said. “It is fall turmeric that became a popular food for people to take before consuming alcohol. Curcumin, which is a main component of fall turmeric, protects the liver.

“A large Japanese company took a particular note of it and produced a product, which led to the boom,” Katsuyama said, noting the success of the drink, Power of Turmeric.

Although taking fall turmeric can help prevent a hangover, some precaution needs to be taken as it can cause adverse effects if you take too much, according to Katsuyama.

Spring turmeric, on the other hand, is in the stage of being launched as a superfood in Okinawa. Takeshi Miyagi of the Okinawa Superfood Association explains one benefit spring turmeric has to offer and a unique background the food has in the prefecture.

“Although benefits of spring turmeric have yet to be scientifically confirmed, it is said that the food was used as medicine in the age of the Ryukyu Kingdom. It was probably passed down by word of mouth,” Miyagi said.

While doing a study on Miyako Island, Miyagi met an elderly lady who farmed spring turmeric in her backyard and mixed it with water to combat stomach problems.

Eating or drinking spring turmeric like the lady has become difficult for many people on Okinawa as the food is not commonly available at stores. But it continues to be farmed and consumed, according to Miyagi.

“A survey suggests that turmeric has long been one of the most commonly farmed medical plants Okinawa has to offer. Especially, spring turmeric is a signature product of Okinawa,” Miyagi said.

“There are places where fall turmeric is produced, such as Vietnam and China, but I have not heard about spring turmeric being farmed outside of Okinawa. We are making efforts to promote turmeric as an Okinawa Superfood.”

Research is underway to find scientific evidence to back up the benefit of the food. So far, several essential oil constituents, such as cineol, have been found in spring turmeric. 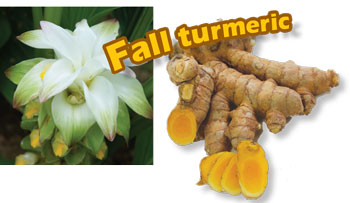 Turmeric has long been a part of Okinawa’s history whether for spring or fall.

Although it has yet to be confirmed how or when it was brought to Okinawa, one theory suggests turmeric was introduced to Okinawa from Thailand between the 15th and 16th century. In the 17th century, turmeric was considered a monopoly under the Ryukyu Kingdom, according to a book by Yoichi Satoi, a researcher at the University of the Ryukyus.

Just like sugar was deemed by the government a special item for export, turmeric became a valuable food, which was sold for high prices on the mainland. But since then, turmeric’s value was forgotten until its reinvention as a hangover cure.

“When my father launched our company about four decades ago, turmeric was not widely acknowledged in Japan,” said Toshinori Nakahodo of Ukondo, a turmeric food company in Okinawa. “We struggled a lot to market the food. But here in Okinawa, it was well known thanks to its long history on the island.”

According to Nakahodo, the names “spring turmeric” and “fall turmeric” were originally coined by his father and other business owners as brand names based on the seasons in which each turmeric blooms. The company’s website also notes that there is also “summer turmeric,” which is commonly known as murasaki ukon (“purple turmeric”). Now, those local brand names have been pushed to a national stage as the food is commonly acknowledged in the country. But it doesn’t change the importance that turmeric carries as an Okinawan food.

“Turmeric grows well in subtropical climate. More than 90% of turmeric in Japan is farmed in Okinawa. We have many turmeric farmers in Henoko Nago city, who provide turmeric to our factories. I guess it is only in Okinawa that such a scale of continual operation is possible for turmeric food,” said Nakahodo.

“Okinawa Triple Turmeric+”, which uses our turmeric as materials, has been well received in the U.S., said Nakahodo.

“I hear the name Okinawa means something to customers in America. I hope the Americans in Okinawa give turmeric a try to help beat a hangover.”

Shops for Turmeric On Okinawa

The magic behind green tea in Japan

It’s a fruit… it’s a vegetable… it’s a SUPERFOOD!