Ever since “washoku,” or traditional Japanese food, was designated an intangible cultural heritage by UNESCO in 2013, popular dishes and liquors like sushi, tempura, sukiyaki, sake, shochu and awamori— have been garnering a lot of international attention.

In fact, Japanese sake has become so popular overseas that exports have reached an all-time high for the eighth consecutive year, according to Japan’s National Tax Agency.

With all the interest in sake, it’s only natural for “tsumami” to suddenly also have its share of the spotlight. Tsumami are snacks and food which pair perfectly with Japanese adult beverages. Visit any izakaya pub in the country and you’ll be surprised at the various menu items meant for snacking with a glass of sake or local beer. 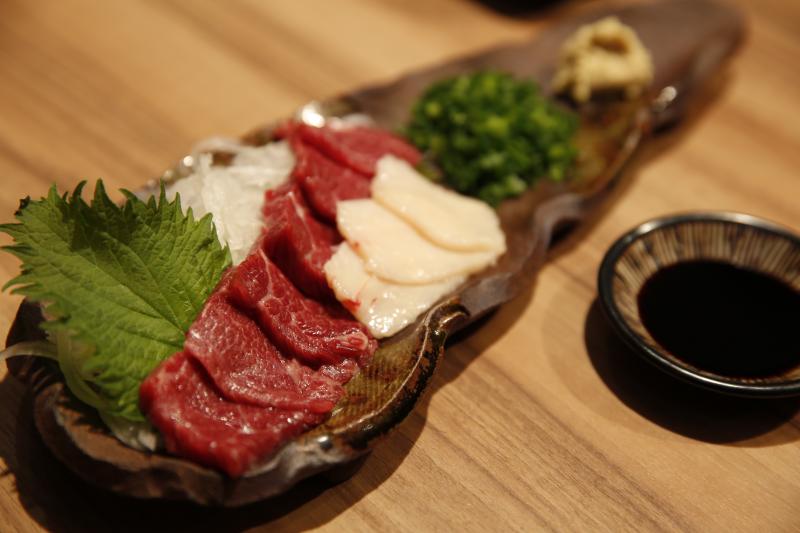 There are lots to choose from depending on where you visit. Popular dishes include a range of veggies, meat and fish. Try some edamame (green soybeans), karaage (fried chicken), sashimi (raw fish), tempura (deep fried vegetable or seafood), tofu and yakitori (grilled chicken skewers), potato salad or oden. For the more culinarily curious, dried squid and nikomi (stewed offal) might be up your alley. Other tsumami include raw horsemeat, dried or fermented offal and sea urchin, which are seasonal and vary by region. Tsumami plates are cheap, too, running as low as 150 yen or 200 yen ($1.50) each. Bbut some high-end dishes can set you back 1,000 yen ($8.50) or more.

Not only does tsumami enhance the flavors of Japanese alcohol, but they also serve as buffer for alcohol intake, helping to prevent or lessen hangovers. Edamame and tofu, both rich in protein, are thought to significantly help in the digestion of alcohol, Asahi Beer Company claims on their website.

Historical bar snacks
Tsumami dates to the 8th century at around the same time when sake brewing began to take hold in Japan.

Back then, nuts, fruits, some vegetables and different seaweed were the core of these pairing dishes. In the medieval era, the dishes consisted of fish, vegetable and rice dishes as meats like pork and beef were avoided by the Buddhism belief that teaches people not to kill animals.

The Meiji Restoration in the late 19th century brought a lot of Western foods and meat-eating food culture to Japan. As the result of this influence, today Japanese tsumami dishes boast a hearty variety for a variety of palates.

My go-to at an izakaya, like other Japanese patrons, is beer and edamame or hiyayakko (chilled tofu) as a starter. I will then order sake with sashimi or tempura, as well as a couple of different types of tsumami dishes.

What to order is dependent on the season. While we will order edamame, hiyayakko (chilled tofu) and cold cucumber in the summer, we most likely order nikomi, oden and sautéed oyster during the winter. Tofu is served differently depending on the season. In the summer, tofu is served chilled with ginger and bonito flake garnish. In the cold season, yudofu, hot tofu, is served with mustard and green onion.

You may be surprised when your Japanese coworker tells you, “Let’s order our meal,” after having plenty of tsumami dishes.

“Let’s order our meal” is almost the same meaning of “it’s about time to head out,” as we usually wrap up our drinking by sampling small portions of simple rice or noodle dishes, such as ochazuke (boiled rice soaked with tea), onigiri (rice ball) or ramen as a closer.

Make your own: Sautéed oysters and mushrooms 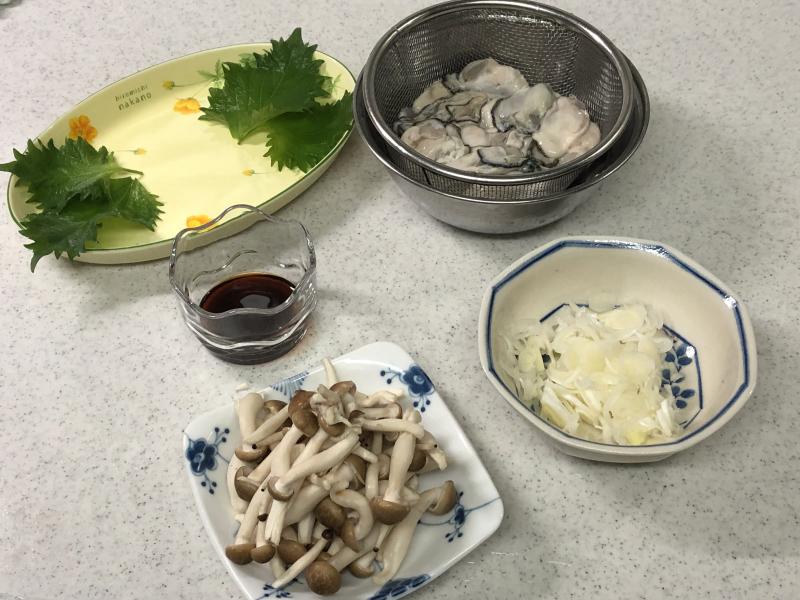 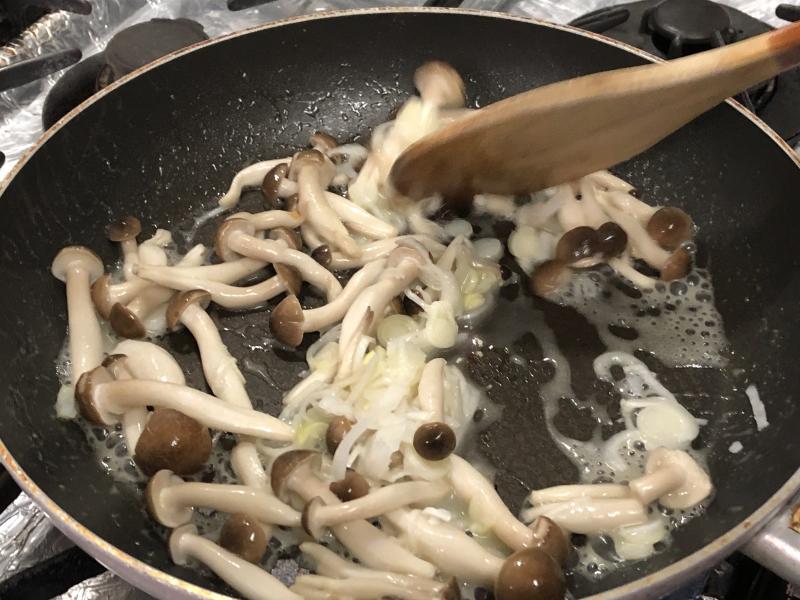 5. When oysters are cooked well, add soy sauce and mix the ingredients. 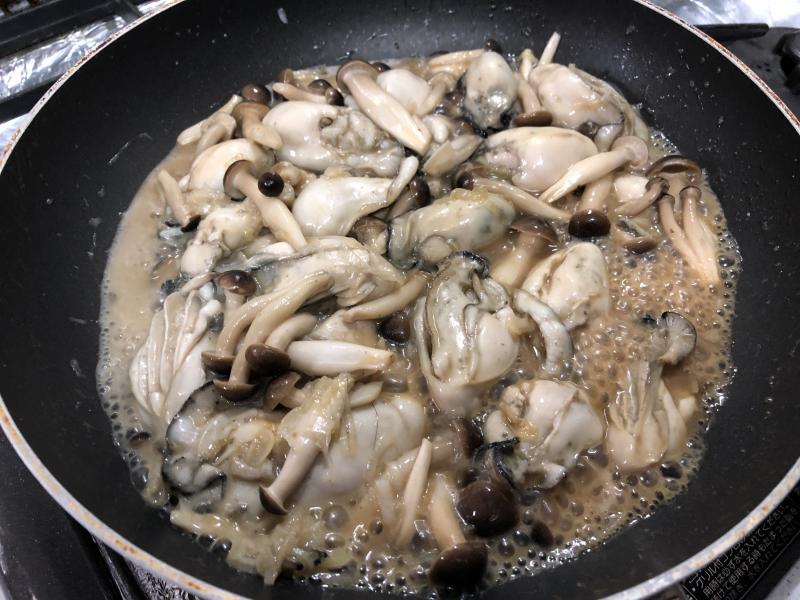 6. Put on a plate laid out with perilla leaves. 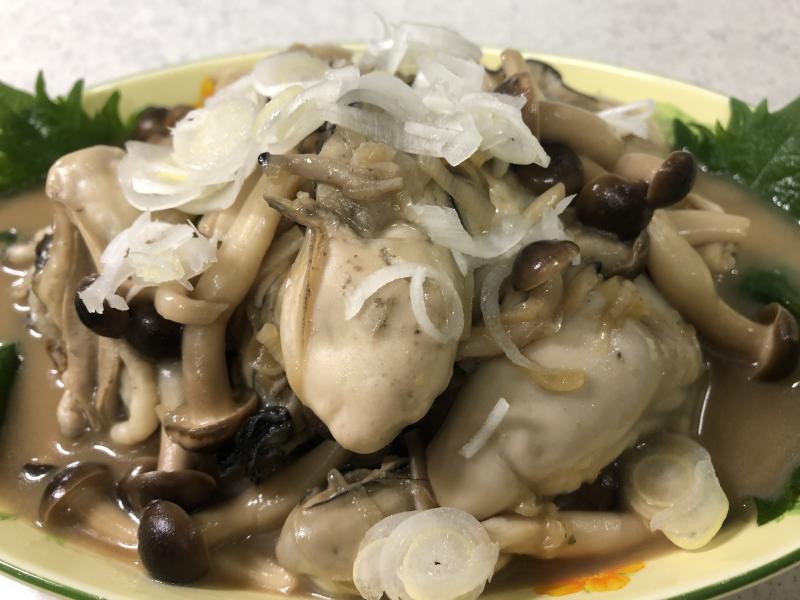 As the number of bars and pubs on the island indicates, drinking is a big part of life in Okinawa. But so, too, are the snacks and appetizers that are washed down with local brands of alcohol like Orion Beer and Awamori.

Listed below are examples of the Okinawan side dishes commonly available at local bars and supermarkets. Some may make the first bite daunting, but in the end, will be worth the try since many Okinawan bar snacks give not only a unique dining experience, but are also chock full of health benefits.

On Okinawa, having fun and eating healthy often come in one package.

This may not sound familiar to people from the States, but pigs’ ear skin is a common food in Okinawa, where every piece of the animal is used in many different dishes.

To prepare the ear skin, first it is burned to get rid of the tiny hairs, then it is boiled or steamed before it is shredded, according to Kyoudo Ryouri Monogatari, a website dedicated to local cuisine in Japan. At local bars or supermarkets, this food is often served in peanut or kimchi sauce or sold as flavored jerky.

Although the name “Mimimgar” means “pig’s ear skin” in Okinawan dialect, the meat itself comes from a deeper part of the skin, which has a soft texture that’s a bit chewy and feels like cartilage. “Mimigar” is rich in collagen, and as such is often described as a health and beauty food.

This popular seaweed snack is known for its versatility as well as for being a health food. Mozuku can be consumed in various ways, but more commonly it is soaked in vinegar or fried for tempura. Many local supermarkets sell the seaweed packaged in small plastic cups with different flavors.

Known as rich in nutrition such as vitamins and fucoidan, a type of water-soluble dietary fiber. The fucoidan is especially valued as it is thought to help fight cancer, help intestinal regulations, and enhance body functions.

Okinawa has earned bragging rights over the seaweed as its signature product since 90 percent of Japan’s Mozuku is produced here.

Catch this local delicacy of fermented suku fish gracing the top of tofu at the local izakaya. The combination of the tangy, salty fish with the smoothness of the tofu is commonly considered a delicacy which pairs well with sake or Awamoris, an Okinawan liquor made of rice.

At local stores, Sukugarasu are sold in bottles packed, literally, like sardines. The fish topping is also eaten a certain way – head first. If you start with a tail, it is said the small fish may get stuck in your throat, so always remember “head first.”

Another familiar izakaya staple is Okinawan shallot, either served pickled or fried as tempura.

Compared to mainland Japan’s shallots, Shima-Rakkyou are smaller in size, but with a very spicy flavor and strong scent making for another great pairing with local liquor or beer.

On the island you’ll find that tofu isn’t always soy-based. Peanut tofu, an Okinawan treat, has a pudding-like appearance and texture. This tofu has a rich peanut taste with a touch of sweetness, which means it is also consumed as a sweet. Jimami tofu is another health and beauty food thought to be beneficial for high levels of oleic acid and vitamin E.

Back in the days of Ryukyu Kingdom, which lasted from the 15th to 19th century, Jimami tofu even has a royal background as it was the prime choice for welcoming guests to the royal palace in Okinawa.

Book details easy Japanese recipes to cook up at home