Instant noodles are great for a quick meal on the run or in between grocery store raids, but they also make great bases for more intricate meals.

Nissin, a major instant noodle maker in Japan, has loads of recipes which use their staple products to upgrade your mealtime. The recipes on the Nissin website include fried rice, Takoyaki, chawanmushi, a steamed egg hotchpotch, and more— all using at least one Nissin product as an ingredient. I took advantage of another work-from-home day to try out the okonomiyaki recipe using Nissin’s UFO instant noodles.

Usually okonomiyaki uses batter, cabbage and ramen or udon noodles as a base. For the Nissin UFO version, I needed the noodles, flour, egg and water.

Cooking this okonomiyaki felt more like playing house rather than following a recipe since no special skills were necessary. Compared with the curry and spaghetti I’ve tried this year, this felt way too easy. So easy, in fact, that it made me question whether or not this recipe would work out.

However, I am happy to report that this UFO okonomiyaki exceeded my expectations!

The noodles were crisp on the surface of the okonomiyaki, but the chewiness added a unique texture, which made it a little different from the usual okonomiyaki you can get at a restaurant or festival.

Though It may be hard to argue that this okonomiyaki made with UFO noodles could match authentic ones served up at restaurants in Osaka or Hiroshima, the flavor of this different recipe was good. I enjoyed changing up the usual okomiyaki, and I think I may just try some more of Nissin’s takes on some of my other favorites.

Try Nissin’s noodle okonomiyaki below and upgrade your noodles today! 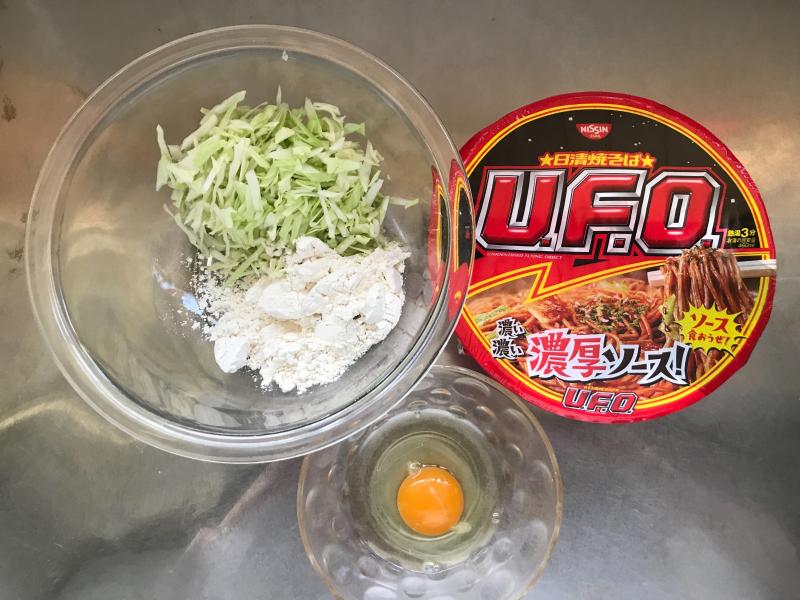 Open UFO package and set the sauce pack and aonori pack aside to use later. Then, place dried noodles and ingredients in a Ziploc bag. Crush the noodles with a rolling pin or wooden spoon until you have crumbs.

Mix the crumbs with flour, egg, cabbage, and water in a bowl.

Heat a lightl- oiled frying pan over high heat, then turn down to medium-to-low heat.

Pour the mixture into the pan and fry until lightly browned on the bottom. You can place a lid over the pan.

Flip the okonomiyaki and finish browning the other side.

*The pancake took about 10 minutes in total to cook through.

Top the food with sauce, aonori (dried green laver), and red pickled ginger, depending on your taste.

*You can also add other ingredients to this recipe like squid or pork and other vegetables. 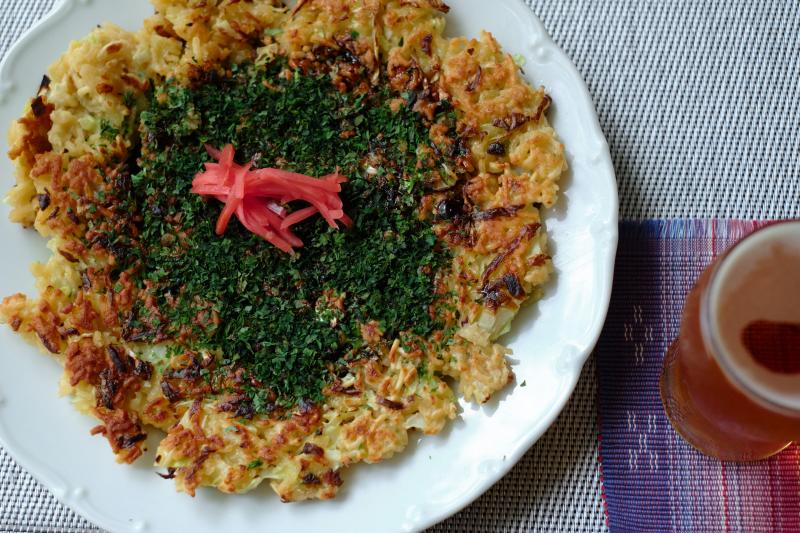