Why is Hokkaido milk, cream and cheese so popular?

Why is Hokkaido milk, cream and cheese so popular?

Historically, Japan has never been a large-scale dairy producing country. However, in the Northern Island of Hokkaido, some of the finest milk, cream and cheese are attracting global interest. At the forefront of Hokkaido’s dairy produce is its famous milk, 60% of which is used for whole milk and the remainder for other dairy products. The cool climate, fresh air and plentiful grazing land make for ideal conditions which help Hokkaido contribute to more than half of all of Japan’s milk production. In 2018, Hokkaido produced over 4 million tons of milk, accounting for 55% of Japan’s annual production of 7.3 million tons (FY2018 “Milk Dairy Products Statistics,” Ministry of Agriculture, Forestry and Fisheries Statistics Department). So how did Hokkaido gain its reputation as the “Kingdom of the Dairy Industry?” 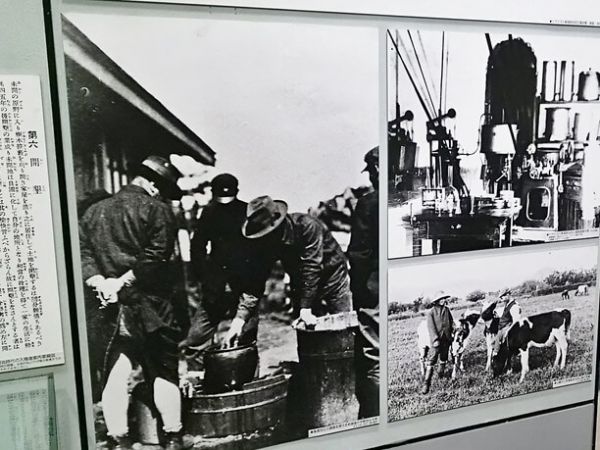 Taking a brief look at the history of milk production in Japan, it was not widely prevalent until the Meiji Era (1868-1912).The boom of drinking milk led to the production of Japan’s first cheese at Nanae Public Garden in 1875. The Emperor of Japan indulged in Hokkaido’s cheese and other dairy products, which put the area in the spotlight of Japan’s culinary scene. This triggered the rise of dairy farms throughout Hokkaido as the Sapporo Agricultural College began to import “Ayrshire” and “Holstein” milking cows. In the 1960s, the westernization of the Japanese diet increased the demand for milk and dairy products, leading to the expansion of dairy farms, facilities and the improvement of grasslands. This remarkable rise in demand led to environmental problems due to the heavy consumption of imported concentrates. Cows were now producing extra feces and urine, which could not be absorbed and used by plants — thus it was not a sustainable method of dairy production. The solution was to promote a more soil-grass-animal interaction based on land use. As a result, grazing on open lands became the most viable sustainable production system in harmony with the environment.

Now, dairy cattle are predominately raised in Eastern and Northern Hokkaido — the vast meadows and cool climate lend themselves to environmentally friendly dairy production. Betsukai Town, located on the Eastern coast of Hokkaido, boasts the largest milk production in Japan —with roughly seven cows per person. Vast grasslands and the neighboring Lake Mashu help filter water, creating the perfect conditions for raising healthy cows. Niseko Takahashi Dairy Farm and Furano Cheese Kobo are just a selection from a host of farms and producers that are free to visit in order to catch a glimpse into the world of dairy production.

One of Hokkaido’s most popular foods is soft cream, the sweet and creamy texture from the Hokkaido milk is beloved all over Japan. Minatogaoka Street in Hakodate is an entire street in the Motomachi neighborhood dedicated to soft cream. For those outside of Hokkaido, Cremia soft serve is instantly recognizable for its graceful wavy silk pattern, and thin langue de chat cone.

Hokkaido’s special miso ramen, which is often topped with a slice of butter, attracts thousands of ramen lovers across the world each year. The use of butter is an added unique twist to the traditional bowl of ramen. For those that associate Japanese food with tradition, this type of ramen might be a surprise but it is a perfect representation of Hokkaido’s use of its delicious dairy.

Why Hokkaido’s hairy crabs are so popular: Firm meat most delicious in spring!

Sapporo Beer Museum: Expand your beer knowledge, have some stellar brews and eat some hearty cuisine