MHS looks to decrease substance abuse, as numbers rose in 2020

Some Alcohol and Drug Abuse Prevention and Treatment programs provide preventive avenues to active-duty members and National Guard and Reserve members on active-duty status who may be struggling with alcohol or substance abuse. (Photo by Air Force Senior Airman Curt Beach.)

MHS looks to decrease substance abuse, as numbers rose in 2020

If there is one overriding element that Navy Lt. Cmdr. (Dr.) Eric Serpico would like you to know about National Drug & Alcohol Facts Week, it’s that help is accessible, and care available.

“We will find you the correct level of care needed,” said Serpico, department chief of addiction treatment services at Walter Reed National Military Medical Center (WRNMMC) in Bethesda, Maryland. “Anything we can do to break down stigma. We collaborate with command and the service member, and there is discretion and sensitivity in the process.”

Treatment at WRNMMC includes detox capabilities, therapy and intensive outpatient services, and a psycho-education early intervention program. For longer inpatient needs, the hospital refers patients to facilities on other bases, such as those at nearby Fort Belvoir, or to civilian settings.

“Primarily in a military setting, we have seen alcohol as kind of the mainstay,” Serpico said. “But that wouldn’t preclude anyone who has used cocaine or marijuana from entering into treatment.”

Regarding what’s referred to as “illicit” drug use, the military’s zero tolerance policy has been in place for decades, but the different branches handle addiction and substance use disorder (SUD) in different ways. And there are different means to get help — via command referral, medical referral, and self-referral. Overall, the approach to care is growing and evolving, Serpico explained.

“There’s increased sensitivity, and I would say, support,” he said. “We have seen junior enlisted to senior enlisted to officers all come through our program. They’re actually being supported by their command to attend these treatments. I do believe there’s been a shift in the culture to promote entry into our type of programs.” 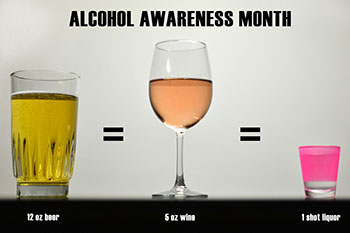 Even those to be punished with removal from the service might still be offered treatment, Serpico added, per the discretion of the commanding officer.

In the meantime, as with the population overall, COVID-19 is wreaking havoc on the armed forces, which historically have had a large subset of heavy drinkers, doctors interviewed for this story said. In a 2019 “Health of the [Department of Defense] Force” report on behavioral health, 13.3% of active service members screened positive on the Alcohol Use Disorders Identification Test-Consumption, which records only voluntary information from subjects, often post-deployment.

“It’s very early in the process to see a pattern of how it’s currently impacting — [or] when we come out of this pandemic, what likely might be the result,” Serpico said. “We’re in a unique time period, and it can become a challenge in finding healthy coping mechanisms to use, rather than substitutes like alcohol.”

From a clinical standpoint, Serpico repeated what everyone from yoga teachers to late-night comedians have been saying since last spring: It’s a challenge to be resilient in the face of a widespread pandemic and its accompanying fear and isolation. Reaching for a bottle of the hard stuff might be easy in the short term. But it’s not going to help.

Substance abuse has some strong “co-morbidities,” or accompanying maladies, that are always a threat, such as depression and anxiety. In times of COVID-19, a source of global stress, those dangers are exacerbated even more by drug or alcohol use, Serpico said. The impacts of isolation can be felt on all aspects of personal life: relationships, career, finances, physical health, you name it.

“You can accumulate risk factors in this pandemic,” he said. “There is a susceptibility.”

Patrick DeLeon, Serpico’s deputy service chief at WRNMMC and a licensed clinical social worker, said there are about one-third more military members in treatment now than in pre-COVID-19 times.

“Many of our newer folks legitimately did not have an issue prior to March,” he said. “This is something that has spiked for them, particularly in the March-April-May early time frame, when folks were very isolated, removed from work, and just out of their rhythms, and out of their social supports.”

DeLeon stated that most of the new faces were a result of alcohol use by those forced to stay at home. And though unemployment is not an issue for active-duty service members, many had nonetheless found their identity and purpose diminished, and missed the camaraderie of normal work life. DeLeon called it, “the ripple effects of that missed human connection, that fellowship.”

While alcohol saturates the culture, there is now widespread public acceptance for the legalization of marijuana, with many states already allowing recreational use of it. Though service members are still subject to the zero-tolerance policy for cannabis, retirees and dependents could more readily develop problems with the increased ease of access. Even seemingly innocuous new products could cause problems.

“That CBD ointment or hemp body wash you got in your stocking for Christmas was a kind gesture, but it can put your career at risk,” read a note in the January 2021 edition of the Navy Drug Detection and Deterrence Newsletter. “Remember that [regulations] prohibit the use of hemp-derived products, including CBD, regardless of how it’s used and regardless of claimed THC content. Protect your career.”

Opioid use in the military remains a concern, too, said Dr. Joshua Gray, a clinical psychologist, researcher, and assistant professor at the Uniformed Services University in Bethesda, Maryland. Guidelines for short-term prescriptions of those highly addictive drugs have gotten stricter over time within the DOD, and though Gray said he feels the trend is in the right direction, for the many who have become addicted, it remains a challenge.

Still, alcohol is the main thread for SUD in the military.

“A large portion of the military is young men, which is the heaviest drinking group,” he said. “It’s definitely an ongoing issue. It’s not a new one, but still significant with regard to health and career implications and readiness. Something we’re focused on is, ‘How do we better catch people earlier in the process of developing an alcohol use disorder?’”

This speaks again to the much-preferred scenario of self-referral rather than showing up for treatment as ordered, or as punishment. And Gray cited a study showing there are new efforts in the Army for more confidential settings for voluntary treatment, and other options.

Gray said aside from tobacco, alcohol is the most lethal drug in the military and in society overall, far and away more dangerous in terms of mortality than any other substance. Even deaths due to opioids, often described next to the word “epidemic,” pale in comparison to the ubiquitous booze.

For more on substance abuse, addiction, getting help, and treatments, visit this Health.mil page or this TRICARE overview of SUD treatment. For help right now, visit the Veterans Crisis Line for text support or call 1-800-273-8255 (Press 1).

Mental Notes with Hilary Valdez: Alcohol abuse and the road to recovery

Mental Notes with Hilary Valdez: Stress during the pandemic