Editor’s note: At Stripes Okinawa, we love to share your stories and share this space with our community members. Here is an article written by Spc. Colene Copeland from U.S. Army Garrison Bavaria. If you have a story or photos to share, let us know at okinawa@stripes.com.

In 1951, an incredible discovery was made when cancerous cells were taken from a woman named Henrietta Lacks. Despite the medical breakthroughs and research these cells have been key in, they are controversial because they were extracted without Lacks’ consent. This was common practice in the early to mid-20th century as a means to have cells and tissue to study and further aid patients. Later, laws protecting patients’ rights would be passed in the U.S. and in 1996, the Health Insurance Portability and Accountability Act of 1996 (HIPAA) was enacted. HIPAA protects the disclosure of private patient information from being given freely to others in the public sector.

Lacks would later die from cervical cancer, but her legacy lives on in HeLa cells, the samples removed from her and named after her. The life of Henrietta Lacks and the controversy surrounding HeLa cells are at the center of “The Immortal Life of Henrietta Lacks,” a book published in 2010 by the author Rebecca Skloot.

According to the book, HeLa cells are used to study cancer in almost every major laboratory in the world, in universities and other organizations. HeLa cells are classified as immortal, one of the only immortal cell lines in existence. Thanks to HeLa cells, medical researchers have made many advances and breakthroughs in medical research.  HeLa cells have been critical in polio eradication and genetic research; they were the first cells to be used in outer space to study human cells and tissue. It was discovered that HeLa cells could split more quickly in zero gravity than on earth.

Another important advancement highlighted in Skloot’s book is that HeLa cells have been a crucial piece in the study of HIV/AIDS and in the development and improvement of Human Papilloma Virus (HPV) vaccines, which can protect against cells that lead to cervical cancer.

There is no denying Lacks’ contribution to medicine, however the ethical violations to obtain these cells is not without debate. Henrietta Lacks has effectively saved a lot of lives of people with her cancer cells and advance scientific research. Without HeLa cells, who knows where oncology research would be today. 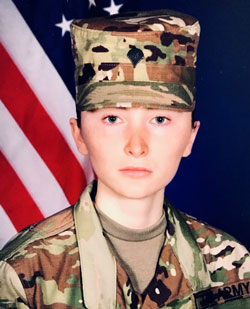 Spc. Colene Copeland with U.S. Army Garrison Bavaria. She is pre-med studying Forensic Medicine, Space and Aviation and Engineering. Spc. Copeland is working towards becoming an orthopedic trauma surgeon focused on the musculoskeletal and joint system. Follow along as she writes about interesting bones in both humans and animals, dives into space medicine, forensic science, engineering, healthcare and medical topics.

How the human spine works with the brain

How MHS GENESIS will become essential to patients' health journey

Mental Notes with Hilary Valdez: Finding the source of our happiness