Inside a small apartment in the country of Colombia, a young boy eagerly grabs a photograph of his favorite bodybuilder off the printer. With a smile on his face, he walks into the living room and presents the picture to his aunt. “Tia,” he said. “I promise you, one day I will look like this.”

That child grew up to be U.S. Marine Corps Staff Sgt. Jorge Gamboa and is working to transcend the same dream he had 12 years ago. Many know Gamboa to be a dedicated father, Marine, competitive bodybuilder, powerlifter, martial arts instructor, fitness coach, and mentor. Few know how he achieved this. 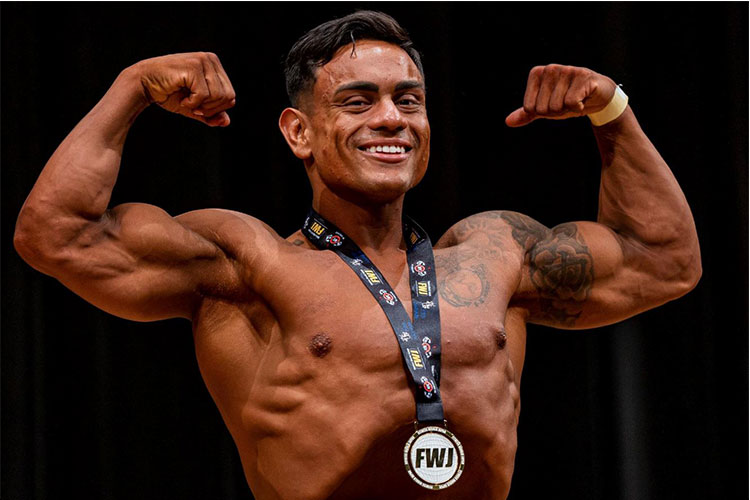 Gamboa grew up in Coral Springs, Florida, and was raised predominately by his mother when his parents separated at the age of three. He lived in a two bedroom apartment with his mother, three cousins, his sister, aunt, uncle, and grandmother, while his mother worked three jobs to provide for the family.

“When I turned nine, the rest of my family moved back to Colombia, so I moved to a better location in South Florida with my mom and stepfather,” said Gamboa. “Around this time, I started developing a love for athletics, and began competing in karate tournaments, playing basketball, baseball, soccer, wrestling, and football.”

Gamboa explained that while growing up he was always singled out as the small kid with a height of 4-foot-11 at the time. At the age of 14, he began to take summer vacations to visit his family and Colombia, where his cousin introduced him to the gym and working out. He explained that by the time of his junior year of high school he had gone from the student that was bullied for his size to the young man nobody would want to pick a fight with.

“When I turned 14, that was when my passion for bodybuilding started to show itself,” he said. “In Colombia, I started researching bodybuilding and became obsessed with learning everything about the human body, nutrition and weight lifting. My mindset was developing and my hunger to become the best version of myself was growing stronger.”

When he turned 18, Gamboa made the decision to join the military. Although never keeping his bodybuilding vision far from him, he began to shift his training regiment to prepare for boot camp and specializing in high intensity interval training. Gamboa was recruited out of Recruiting Substation Margate, Florida, and went to Marine Corps Recruit Depot Parris Island, South Carolina, Sep. 15, 2014.

“After graduating recruit training and Marine Combat Training, I got to my first unit, 2nd Marine Logistics Group, 2nd Medical Battalion, as a logistics embarkation specialist,” said Gamboa. “I took advantage of being in a garrison environment and started to learn everything I could about my job. I was put on temporary additional duty where I became the embarkation chief as a private first class. I got the chance to develop my character and responsibility handling skills as a Marine very early.”

The now staff sergeant explained that around that time he began to start preparation for his first bodybuilding show, the Hardcore Classic Bodybuilding Show at Camp Lejuene in 2015. He said that training for a show as a junior Marine was not always easy, often requiring him to miss sleep in order to complete his workouts and meals.

At the age of 19, the youngest competitor in the competition, Gamboa not only won first place in his category, men’s physique, but placed first overall with the other height and weight groups. Immediately after the competition he decided to try powerlifting where he won first place in his first two events. However, his Marine Corps career would quickly begin to speed up.

“As a corporal, I got sent to the 26th Marine Expeditionary Unit, whom I deployed twice with, and completed a humanitarian mission in Puerto Rico and the U.S. Virgin Islands on the USS Kearsarge,” said Gamboa. “In August 2018, I got promoted to the rank of sergeant, and after getting back from deployment, I got married and got ready to check into Okinawa, Japan.”

Throughout his Marine Corps career, Gamboa has always found new ways to make himself stand out. With a passion for martial arts, he became a Marine Corps Martial Arts Instructor and has trained over 500 Marines all while earning his Brazilian jiu-jitsu blue belt.

Day in the life

Today, Gamboa serves as the mobility chief with Headquarters Battery, 12th Marine Regiment, 3rd Marine Division, and is conducting a permanent change of station to Cherry Point, North Carolina, where he will be reunited with his son.

“Although my son has been far away from me for some time, he has always been my inspiration for competing in Okinawa,” said Gamboa. “I want to be the father to him that I never had. Every time I look at my phone screen, I see a photo of him, and that reminds me to keep pushing even through my darkest times.”

“When I’m preparing for a competition, my entire schedule changes,” he said. “I start my mornings at 2:00 a.m. to make it to my first workout, so I can still have time to either lead physical training or a martial arts instruction course afterwards. From there, I have work where I spread out my meals throughout the day and funny enough, I eat with a baby spoon to prevent overeating.”

After a regular work day is completed, Gamboa is back at the gym for a second session. At the end of the day, he focuses on checking up with his athletes, updating their training protocol, and expanding his team outreach on social media.

Gamboa explained that during competition preparation, he has to stay consistent with his goals while maintaining his duties as a Marine. He said that it is not an easy process - preparation may begin up until 6 months before the show, with drastic changes to diet and training protocol with extensive focus on cardiovascular training to aid in losing extra body fat.

“When you’re preparing for a competition, even the smallest tasks become difficult due to the reduced amounts of food you are eating paired with increased training intensity,” he said. “Simply getting out of bed requires every ounce of your strength. Although it’s hard to manage being a Marine while competing in multiple competitions, you find ways to make it happen.”

In 2021, Gamboa decided he wanted to take a big step in his personal career. He spearheaded the creation of his own bodybuilding team. The team of bodybuilding competitors consists of active duty service members from all branches, veterans, local Japanese community residents and Department of Defense personnel spread across Okinawa, mainland Japan, and the U.S.

“I first approached Gamboa through social media for physique coaching assistance,” said Navy Petty Officer 1st Class Kim Hugo, a hospital corpsman with 3rd Medical Battalion, 3rd Marine Logistics Group. “Little did I know I would be stepping on stage in nine weeks thanks to his coaching. When we first discussed my goals, I could tell he was passionate, knowledgeable, precise, and knew exactly what I needed to do. Communication is his main priority, which is vital between a coach and athlete relationship.”

Originally, the team consisted of entry level and seasoned competitors, with Gamboa as the only coach. As the team expanded, Gamboa delegated the title of coach to some of the experienced members, who take a personalized approach to each athlete and guide them through competition preparation, meal planning, training protocol, and physique posing practice. The team, while spread across the world, shares one common goal: to become the best version of themselves.

“When the team started, we were small, but since then it has developed into a much larger platform of teammates and lifelong friends,” said Hugo. “There is something special and unifying about going through the rigorous process of competition preparation with other individuals dedicated to this type of fitness.”

Whether the current intention of each athlete is to compete or to gain muscle mass during their off-season from competing, Gamboa makes personal communication his first priority. The team regularly conducts check-ins with Gamboa and the other coaches, ensuring they are following their food and training protocol tailored towards their current and future goals. During the virtual check-ins, Gamboa personally modifies their course of action to better help his athletes achieve their objective.

“The sport of bodybuilding is a worldwide language,” said Gamboa. “It’s fascinating to meet individuals who may not speak the same language as me, but have the same passion for competing and bettering themselves.”

Gamboa, members from his team, and local competitors regularly meet up in gyms across Okinawa to train together and share a post-workout meal afterwards. Although Gamboa is leaving the island, members of the team will still be virtually coached by him and continue to meet up on a weekly basis.

“Not only has he helped me fulfill my dreams of stepping on stage, he has impacted my life in so many different ways,” said Hugo, a native of Orange County, California. “He helped me become more confident, push myself to my absolute limit, and showed me what I am capable of. Gamboa believed in me during times I didn’t believe in myself. Through his coaching, I have learned how to live a healthier and more balanced lifestyle when I am not preparing for a competition.”

“When I make it back to the U.S., I will finally be reunited with my son,” said Gamboa. “I’m going to put a lot of my plans on hold to spend quality time with him, and show him how I’m making my dreams a reality. I just want him to be proud of me.”

Gamboa has big plans for his team. His plan is to continue his legacy in Japan while spreading his team even more throughout the U.S. by creating a website and bolstering his social media presence.

“I just want to influence others in a positive way,” said Gamboa. “I want to teach others what I’ve learned from my mistakes and continue to build a team of dedicated individuals with one common goal - to become one percent better than we were the day before. My team is a part of my family, and it is humbling to know that wherever I go in the world, my family will be there.”

Gamboa explained that although transitioning to living in the U.S. again may be difficult, he thinks it is the best way for him to have the healthiest balance in his life between his family, work and dreams. He said that he will never forget the life-changing experiences and lifelong friendships he has built in Japan with his Marines, athletes, fellow competitors, and local community members.

“He really did change my life,” said Hugo. “From being a coach, a friend, and now a brother, he will always be family to be. No matter where we end up in the world, I’m proud to be a part of his legacy.”

Okinawa Marine retraces family's past on island through photos