It’s officially been a few days since coming home from my first trip to Okinawa. I will admit, coming home has been difficult. Anyone who travels often knows the three phases of every trip: 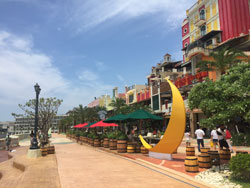 The pre-trip phase is exciting! You buy your ticket and start looking up all the local shops, food, attractions, museums, and learn a phrase or two in the local language. I flew in thinking that because I was staying with Americans, I would be lead around like a little mute mouse. I was wrong— but more on that later.

Pre-trip shopping was fun too! I was looking forward to ditching my daily business casual for island life attire and going from my spring clothes in the desert to sundresses and beachwear attire.

Soon, it was time to drive to the airport and endure all the traveling to get to Okinawa. First, I had to drive from Tucson to Phoenix, then three separate flights until finally arriving at my destination.

Can I take a second and mention how disappointing the domestic flights terminal was in Narita??? I could not believe there was only one airport shop in the terminal and only one or two tellers for the four gates!

By the time I landed in Okinawa, I was exhausted and ready for bed, but most excited to see one of my best friends that I hadn’t seen in over a year. I think I was most surprised by the little blue car he was now driving that was a far opposite from the big 4-wheel drive truck he had in the states. I knew the cars would be different, but the “mini” cars as well as driving on the left side took some time to get used to. 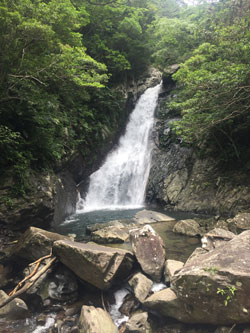 I was finally ready for the second phase of trip planning – the wonder of the trip itself. Okinawa took my breath away. Sunabe Sea Wall was my view every morning- I cannot tell you how often I found myself standing against the railing and just taking in the views. I really loved exploring the city life of Chatan and the surrounding areas. The small stores, restaurants, and bars were captivating and intriguing.

American Village became one of my favorite places to visit on the island. There we ate at many restaurants, tried the coffee and bars, and I spent a morning at M-Grace Spa getting a mani-pedi and wandering the shops.

Before my trip, I was worried about traveling alone or having to be on my own at any point given the language barrier, lack of cell service for maps, and knowing very little about the island. On this trip, I wandered Sunabe and explored Chatan on my own and I have my friend and the Okinawan people to thank for that. Not only did I explore these alone by foot, but I also did it without cell service or wifi (very counter-2019 culture). The freedom from being “always connected” was something I didn’t know I needed, and it made the time walking the sea front that much more amazing.

I was eager to see more of the island. We went trekked up the island to Churaumi Aquarium, Maeda Point to snorkel, walked the trail to Hiji waterfalls, and took the scenic Route 2 around the northern part of the island. Take note, fellow travelers, up north, there are few homes and almost no restaurants. We stopped out at a roadside market and picked random items to munch on (of course, the restaurant at the market closed 15 minutes before we made a pit stop). The road home took us down the eastern side of the island and eventually to Sea Glass Beach in Nago. The overcast skies and few sprinkles of rain meant we had the entire beach to ourselves. The rain held off for a while and we sat there just soaking it all up- and collecting some shells, glass, and making a few hermit crab friends.

As for the food, I knew I would not be disappointed. My friend is a foodie just like me, After all, our friendship in the Arizona desert grew on this fact and we would try new restaurants in Tucson weekly. We visited many places and I tried many local foods including soba, mochi (both savory and sweet!), squid ink bread, purple sweet potato shaved ice, bubble tea, bimbimbap, matcha, drinks from the vending machines on the side of the road, and more!

The last dinner that we had on the island was the most relaxing way to end my trip. My friend that I was staying with pulled a few strings and some very good friends came through with local mahi-mahi they had caught on a fishing trip. From that catch we made homemade poke bowls. I had never had something so incredible and fresh! 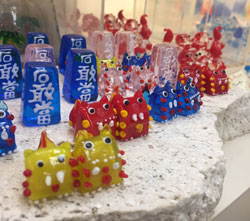 My last night in Okinawa was spent laughing with friends, sipping wine, and enjoying the ocean view. Before me in my friend’s home was the perfect harmony of the familiarity of the furniture I had helped pick out in the desert, the company of my loved ones combined with the fact that we were halfway across the world on a tropical island listening to the sound of the ocean and not the coyotes howling at the moon.

As quickly as the second phase had started, I was soon in the final phase of travel. My friend was flying out the same day to go on his own adventure, so we packed all our luggage into that little blue car and were on our way. My final morning in Okinawa was a relaxed one, and, after trying two different restaurants (local businesses on the island sometimes close on random days and keep random hours), we had a nice breakfast at a local eatery.

The “leaving here” moment started as we drove past the big shisa dogs (which I just adore and bought miniature versions of as gifts), and past the ocean on our way to the airport. By the time I landed in the Osaka airport, I was fully aware that I was heading back to the reality of home. Culture shock hit me hard when I was in line for coffee at the SEA-TAC airport and surrounded by frustrated air travelers. Oddly enough, I hadn’t noticed that tension in the airports in Japan, either because it was less stressful there or because I was oblivious. By the time I got off the plane in Phoenix, the 102-degree Fahrenheit dry heat and the fact that my trip was over hit me full force. I suddenly craved the humidity of Okinawa. 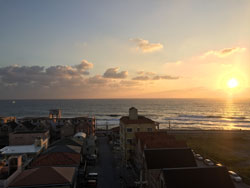 I’d be lying if I said coming home was easy. I sought out my friend who had just PCS’d from mainland Japan the same day that I flew back to AZ. He was going through the same “post-travel blues” that I was. I pulled my co-worker aside to talk with her about her trip to China and was relieved to hear that it was just as hard for her to come home.

Traveling is a gift. The chances to explore new cultures, foods, sights, and to see the world is a beautiful and unique experience. It’s a change from the stress of daily tasks: work, co-workers, cooking, cleaning, paying bills, feeding the dog, going to the gym, etc. I can truthfully say that I never slept so well or felt as rested every morning as I did on this trip.

My take away from the entire experience can be summed up as so: Breathe. Take time to NOT plan. Take every day as it is, weather and all, and let your plans flow with it.

Finally, and most importantly: Thank you, Okinawa! To the people, places, flora and fauna, weather, etc. I am grateful.

Below are some of the delicious restaurants I visited during my stay. 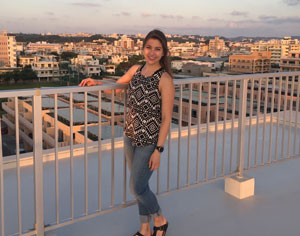 Samantha Bettenhausen is a foodie in Tucson, Arizona. She recently visited friends stationed at Kadena Air Base and is sharing her adventure to Okinawa with us. Samantha is a physical therapist assistant and spends her free time working out, out on a run, or with family and friends enjoying food or coffee.

Samantha tells us she used Stars and Stripes Okinawa to help prepare for her trip to the island. She said she is also thankful for the men and women in the Armed Forces and expresses her gratitude to her brother, cousin, grandparents, and friends who are currently serving or who have served.

Dear Okinawa, I love you!