Click here to check out this great video! Thank you to Max Bloom Films for the videography.

Camp Hansen, OKINAWA, Japan -- USO Okinawa created the hugely popular Operation Birthday Cake program in 2007. To date, nearly 7,000 cakes have been delivered to service members stationed in Okinawa as requested by family and friends back in the states. In 2020, 1,225 cakes were delivered by staff and volunteers across six centers on island.

In the 13 years since this program started, this is USO Okinawa’s first time delivering a birthday cake to twins both stationed in Okinawa, Japan. Sgt Daniel Shifflett is with Marine Wing Headquarters Squadron 1 (MWHS-1) on Camp Foster and SSgt Michael Shifflett is with 3rd Reconnaissance Battalion (3rd Recon) at Camp Schwab.

Kathy Shifflett, mother to Daniel and Michael Shifflett, currently resides in Georgia and she first reached out to USO Schwab to coordinate the delivery of the birthday cakes to her sons. As soon as USO Schwab’s Center Manager, Bridgette Sanchez, received the details of this request, she worked with USO Camp Foster’s Center Manager, Angela Tom to see if we can somehow get them together to deliver their birthday cakes.

The distance between Camp Foster and Camp Schwab is about 50 kilometers, and both center managers coordinated with their respective units to have them meet at USO Hansen for a “working party.” As Motor Transportation specialists, they occasionally go to Camp Hansen so there was no suspicion of a birthday surprise. 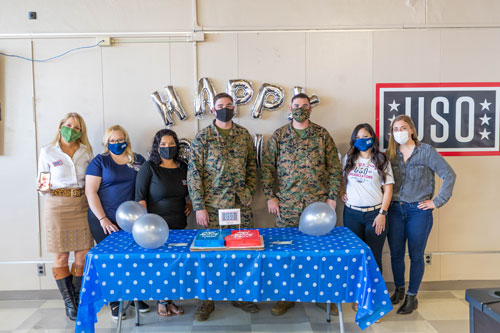 In preparation for the surprise, the USO team arrived at USO Hansen early to set-up a table decorated with balloons and a special birthday cake, made by the Camp Foster Commissary Bakery. To make the birthday celebration even more special, Mrs. Shifflett was able to join us from Georgia via FaceTime, and they were both completely shocked to see that their mom in on the surprise! As a special request from their mom, they had to show her the “twin hug,” which definitely made her day.

Michael arrived first, and the team had him standby while we waited for rest of the “working party.” Not only did they celebrate their birthday, but Daniel reenlisted another four years in the Marine Corps! MGySgt Marsh with MWHS-1 drove Daniel from Camp Foster, immediately following his reenlistment ceremony. Upon their arrival to USO Hansen, Daniel and Michael were surprised to find each other in the same place at the same time! Along with Mrs. Shifflett on FaceTime, the USO staff members and patrons all happily sang Happy Birthday to the them and ended with a few pictures!

“Mom always does some kind of surprise for us, even when we were back in the states, she would send us care packages of some kind,” Michael Shifflett said. “Last Christmas I went to Camp Fuji for a year. With that and the pandemic, it’s prevented us from being together. It’s been years since we have been together on our birthday.”

USO Okinawa team said it was thrilled to be able to bring them together to celebrate their birthday, especially during this pandemic where they have not been able to see each other.

“Operation Birthday cake is one of my favorite programs that we conduct,” Sanchez said.  “We love being able to connect the families with their loved ones serving their country overseas. I will never forget the excitement from Mrs. Shifflett to be able to surprise her twins. I could not be prouder to be part of the USO Okinawa team. Lastly, we want to thank Rudy and the team at Camp Foster Commissary Bakery for making a special birthday cake for the Shifflett twins! “

USO Operation Birthday Cake Program helps families stateside surprise loved ones, stationed overseas, with birthday cakes. To find out more about this program and all the USO has to offer click on Okinawa.USO.Org.