(Camp Foster- Okinawa, Japan) In Okinawa, the USO has assisted service members and their families in restriction of movement (ROM), quarantine, and heightened HPCON measures since the beginning of the pandemic. When Cindy Kirkman, Okinawa Area Operations Manager, received a call from US Naval Hospital Okinawa for USO support, the Storks Nest program was born.

Air Force SSgt Jeraka Quenga and her husband Eric began 2020 with great news. After several years of trying, Jeraka was pregnant. Ava, their 11-year-old daughter, was excited that she was finally going to be a big sister. The family even attended Jeraka's first appointment before COVID19 was documented on Guam.

By March, Jeraka had to attend her appointments alone due to the COVID19. She used her cell phone to record the ultrasound that showed she was expecting twins. Their long-awaited miracle meant Jeraka was high risk during a global pandemic.

Faced with a high-risk pregnancy, the Quengas needed to be close to a neonatal care unit. Jeraka, a paramedic, was placed on medical leave and arranged for Ava to stay with family so she and Eric could make the 1,400-mile journey to the United States Naval Hospital Okinawa (USNH). 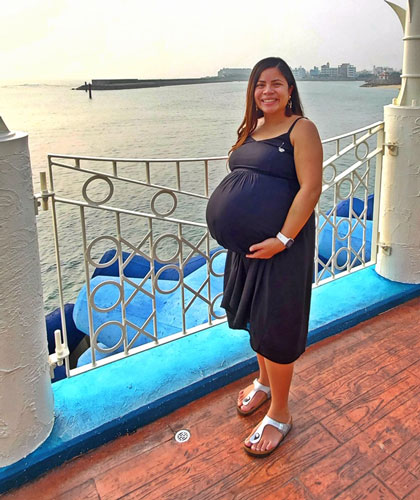 USNH offers the only Department of Defense Neonatal Intensive Care Unit in the Western Pacific, providing comprehensive care for sick and premature newborns. The hospital serves military service members and their families from mainland Japan, Guam, Korea, and Okinawa.

“I was sad that I was leaving my daughter and family. I was scared of flying during a pandemic, and not having enough protection from COVID19,” Jeraka Quengas said. “Once we landed on Kadena Air Base and made it to the Stork’s Nest, our billeting on Okinawa, with limited contact with others, I was relieved and felt we were safe. We had a stocked fridge and gifts from USO Okinawa. Being in ROM for 14 days was not that bad. Our biggest concern was food and USO Okinawa set us up when we first arrived.”

USO Okinawa welcomed the family with a first 48 hour meal pack, followed up with resourceful gifts for baby and mom, and the staff checked in on the couple on a regular basis throughout their stay.

The Quengas spent five months in Okinawa while they waited for their babies. They took the opportunity to see as much as the pregnancy and HPCON restrictions would allow.

On August 20, 2020 and 38 weeks, Åmi and Åri were born. “It was an indescribable feeling to hold both of them in my arms. My heart was bursting with so much love. I was still in shock; how could I have possibly given birth to these two perfect beautiful little humans. I couldn’t help but thank God for answering all our prayers.” 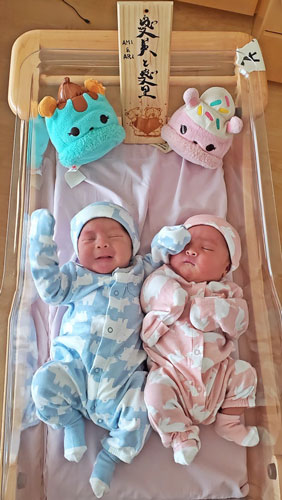 The Quenga family remained in Okinawa for a few weeks and then returned safely to Guam via aeromedical transport. Their trip home required that they first travel to Hawaii, where they waited three days before they flew on to Guam. The family is now safely reunited with their oldest daughter, who is finally getting to know her little brother and sister.

While Ami and Ari may not remember their island-hopping adventures, their parents will surely never forget their fantastic start to life.

COVID: One year later on Okinawa