As a siren blared, the team took the offensive. Guns a blazing, they charged from the safety of a wooden barricade and directly into the line of enemy fire. 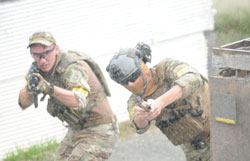 “Pow, pow, pow …”  It was a chaotic scene as shots rang out across the warzone. Taking cover behind a broken-down car and piles of tires, they assessed the situation. They were outflanked, outnumbered, but undeterred.

The leader motioned to one of his soldiers to advance on the tower where two sharpshooters showered the group with ammo fire. Ducking, dodging and firing back with the skill and determination of Rambo, the soldier closed in on the tower.

As he turned to motion to his team to follow, a single shot rang out.

“I’m hit!” he yelled. And with that, he raised his hand and with a mixture of smile and disgust on his face, walked off the “battlefield” as he wished good luck to the other “warriors.” 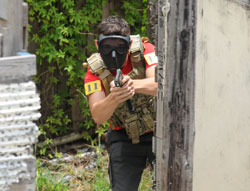 This is a common scene at Okinawa Airsoft Park, where the weapon of choice is an airsoft gun. Here, many join in on the recreational sport of airsoft, spending their time shooting at their friends in friendly battles, traversing obstacles and guarding themselves from getting “shot.”

Although it looks similar to paintball, airsoft doesn’t use paint pellets. Instead, the guns are loaded with BBs made from either biodegradable or non-biodegradable plastics (OAP uses biodegradable BBs). Since getting hit will not leave a paint mark, the rules of the game are slightly different and may take some getting used to. And, quite frankly, honesty is the best policy.

“Once you get shot, you say ‘hit’ and leave the scene,” said Tatsuya Shingaki, president of the Okinawa Airsoft Group.

“If you dare, you can pretend like you were not hit, but the game will not stand unless you voluntarily admit that in a fair manner,” he said, stressing that the game is more about having fun than winning. 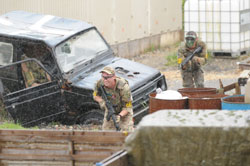 At OAP, games take place one after another in short intervals. One game takes about 10 minutes. Participants split into a red team and a yellow team, then compete under various scenarios. In one case, one team plays offense while the other plays defense. They switch roles and positions in the next game.

Other scenarios are based movies such as “Black Hawk Down,” “White House Down,” and “American Sniper.”

The park also regularly offers night sessions. In case of rain, the games continue unless the weather becomes dangerous.

Shingaki stressed that safety is the top priority of the OAP staff. Proper eye-protection must be worn at all times on the field and beginners go through a 15- to 20-minute crash course on how to handle an airsoft gun and navigate the park.

The recreational sport draws many people to OAP, from elementary students to U.S. servicemembers and members of the Japan Self-Defense Force.

“It’s a great way to build comradery between the United States Forces and JSDF, or Japanese nationals and myself,” said Brock Davis, who described himself as a regular at OAP. 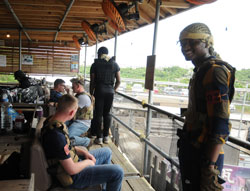 “For us, we’ve come out here as a shop. We are enjoying this comradery-type of thing,” Harp said. “You got other people coming in from different branches. It’s like a tactical kind of training in a sense as well.”

Shingaki sees airsoft as a great way to make friends and enjoy an afternoon of playing.

“The game can also expose your character and quickly break the ice,” Shingaki said. “Strangers become friends once they complete a mission, hugging and high-fiving each other.”

OAP is about a 10-minute drive away from Camp Foster’s Legion Gate and welcomes shooters of all levels. 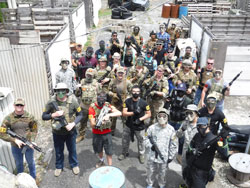