In Northern Japan, let nature give way to Akita, a beautiful castle town packed full of attractions great for a fun day-trip or overnight stay. 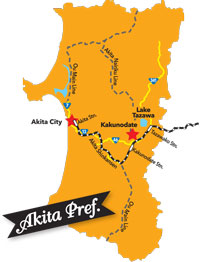 Located in the northern part of mainland of Japan and facing the Sea of Japan, Akita City is a four-hour drive from Misawa Air Base. The city is surrounded by rice fields and mountains and is known as one of the nation’s most important granary regions.

Recently my wife and I drove in the area to check out the natural and cultural attractions. Our first stop: a visit to see the “Weeping Virgin Mary of Akita.”

Located on a hill, the Institute of the Handmaids of the Holy Eucharist is a place that attracts both religious-minded people and curious tourists. From the outside, the wooden building with gray stone tile roof looks just like a traditional Buddhist temple, rather than a Catholic hall.

As soon as we slid open a wooden door of the building to enter into the chapel hall, we were welcomed by a crispy smell of newly timbered wood.  The wooden statue of the “Weeping Virgin Mary of Akita,” also known as “Our Lady of Akita,” is enshrined in an altar in the hall. 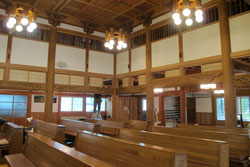 The wooden statue has gained global fame when it seemed to weep in 1975. Up until 1981, the statue, carved by a Japanese sculptor 55 years ago, it was observed to weep a total of 101 times. When the statue started weeping, nuns stopped their daily work and gathered to pray the Rosary. Medical experts at the time determined the tears were those of a human, the institute brochure said. The statue has not “wept” since 1981, but it has still not stopped tens of thousands of yearly visitors seeking to catch a glimpse of this mysterious Virgin Mary.

The grounds of the chapel are home to a peaceful garden. Although it was raining, we stayed in the midst of the garden with an umbrella in hand for a while, enjoying some deep breaths of extremely fresh, cool air.

After our serene visit we headed to the 469-feet high Akita City Port Tower Selion located on the Akita Port. The futuristic tower is made of steel frames and 6,272 pieces of enforced glass reminiscent of a space craft.

From high up on the observatory deck, we looked down the entire city with port and factory facilities in the foggy air. On a fine day, there is a view of blue sea against the backdrop of the Oga Peninsula and Mount Chokai.

Down below on the first floor of the tower, Selion Garden is a large market where you can get all your Akita souvenirs and local products.

Our Lady of Akita (The Institute of the Handmaids of the Holy Eucharist)
Location: 1 Soegawa Yuzawadai, Akita City, Akita Pref.
Hours: *Temporarily closed until the end of August due to COVID-19.
Website
TEL: 018-868-2139 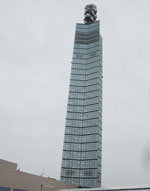 Since the rain stopped, our next stop was downtown for a stroll along the large streets to check out the many parks, museums, restaurants and cafes Akita has to offer.

Our stroll led us to one of the city’s main attractions – Senshu Park, site of the Kubota Castle ruins. 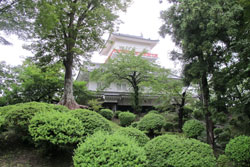 Originally, Akita was developed around the castle built in 1604 by the Satake Clan, feudal lords that ruled during the Edo Period (1603-1867). When the samurai era was ended, the castle was opened to the public as Senshu Park.

Today, the ruins are surrounded by flower gardens, a waterfall, turrets and other side buildings including a guard’s house, bell tower and tea house. During our visit, white and pink lotus flowers were in full bloom, adding another element of beauty to these vast grounds.

We soon departed the park and made our way to Akarenga Kyodokan, a local history and culture museum, known as an important national cultural asset.

The museum featuring local products, artwork and other exhibits on the city’s history and culture is on the second floor.

We learned a lot about the city at the museum and the 93-year-old red brick building it’s housed in originally built as the head branch of Akita Bank, was an impressive sample of the unique architectural style of Meiji Restoration period in early 20th century.

While the majestic façade and exterior have the interesting color combination of white ceramic tiles and red bricks, the interior is gorgeously decorated with reliefs curbed on marble, plaster and wooden objects. Along with classical furniture, that made us feel as if we were walking in a residence of aristocrat. 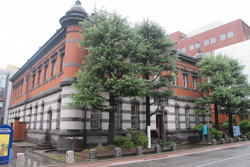 After some history and architecture, we took a five-minute walk to the Akita City Folk Arts Center, also known as “Kanto” Center.

Akita is famous for its traditional “Kanto Matsuri” festival where people hold 15 to 50-feet long bamboo poles bearing 24 through 46 lanterns in hopes of a good harvest season. At the center, you can see the bamboo poles and even hold some year-round. We tried our hand at holding the poles with assistance from an employee who also gave us an explanation of the festival. 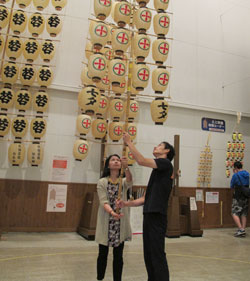 Next door to the folk arts center, the former home of the Kaneko Family, traditional kimono dealers, is another point of interest. The family was one of the richest merchant families in the city during the early 20th century and the home was preserved and turned into the city’s cultural asset and opened to the public in 1996. Inside, visitors can check out the chic, black wooden interior made up of shop space, storage, owner’s residence and staff rooms, that would still be considered pretty fancy by today’s standards.

When we wrapped up our town walk at this beautiful traditional shop house, we felt Akita is very fascinating, as it accommodates both natural and cultural, and old and new attractions packed in the center city. 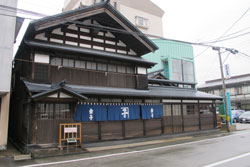 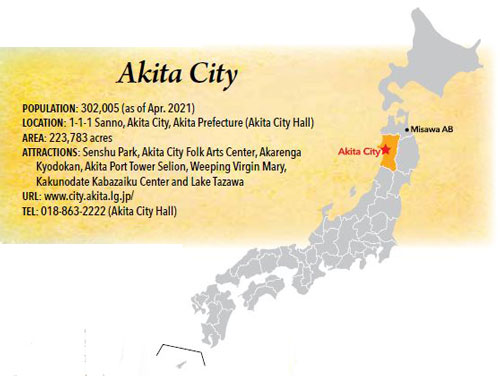