I love Christmas festivities, but New Year’s Eve celebrations are particularly dear to my heart. Firstly, there are a lot of my family traditions associated with the day that now bring great memories. Plus, there is something special about counting down to new beginnings, filled with hopes, aspirations, and plans. In Japan, New Year, or Shogatsu, is mostly a quiet family affair celebrated at home in the company of loved one and is filled with a number of traditional “activities.” However, those who want to see off the past year with a bang aren’t disappointed either. There are quite a few spots where you can join the crown and bid the past year good-bye in the most amazing and luxurious way. Here are some of my top picks.

Countdown Party at a Luxurious Hotel 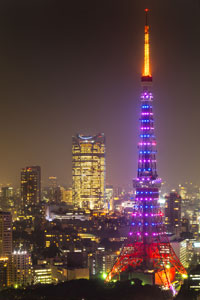 The Peak Bar at Park Hyatt Tokyo throws a fabulous Countdown Lounge with free-flowing champagne, cocktails and canapes, plus internationally acclaimed DJs on the decks. A breathtaking view of Tokyo skyline from the 41st-floor doesn’t hurt either. We spent 2016 New Year’s Eve there and loved it so much, we are going back this year again to great ring in 2018 in style! Equally fabulous event is held at the Peninsula Hotel where you have a chance to indulge in a five-course gourmet dinner, followed by a countdown party. Last but not least, Shangri-La Hotel Tokyo will make sure you kick off your 2018 to a spirited start with the New Year Countdown Party at the Ballroom with DJ and live entertainment. They also offer New Year Lunch Buffet at the Ballroom in case you want to start the day a bit early.

In case you are looking for something less pricey and crave to be in the midst of the crowd, then you can either join the Countdown Party at The Tokyo Tower (I’ve been told that the tower is lit up in different colors at midnight and balloons are floating in the air) or head to Shibuya – the busiest crosswalk in the world. Just be warned, according to Tokyo TimeOut the place turns into “a writhing mass of humanity at midnight.”

For a more romantic and intimate celebration, I believe that you cannot go wrong with a dinner cruise on Tokyo Bay. You’ll enjoy a grand buffet dinner accompanied by a live music entertainment and have a chance to view gorgeous fireworks of the rainbow bridge when the clock strikes midnight.

For those seeking a more whimsical ambiance, Disney Tokyo is probably the ultimate destination. While spending the night in one of Disney hotels seems to be a magical way of celebrating New Year, you can also just purchase an advance ticket to view the fireworks show at midnight and then head elsewhere. Good thing is, the train work all night on New Year’s Eve!

As I mentioned before, Japanese have a few traditions associated with celebrating New Year. One of the most important ones is joya no kane – visiting a shrine at midnight on December 31st to ring out the old year 108 times and thus cleansing soul for the New Year ahead. This ceremony is held at every local Buddhist temple, but the ones that attract most crowds are Sensoji and Zojoji Temples. Another event that I absolutely loved hearing about is a Oji Fox Parade that starts Shozoku Shrine to nearby Oji Inari Shrine for the first prayer of the year, hatsumode. I have seen photos of the participants being dressed up in the most fascinating fox costumes and I think it’d make a unique event to attend if you want to see something truly traditional and off the beaten path.

I hope this guide was helpful for you to decide what you want to do on New Year’s Eve in Tokyo if you’re still trying to make up your mind. No matter how you decide to celebrate, I hope you have the most unforgettable and fun night. Don’t forget to make a wish when the clock strikes 12!