Beauty and tragedy at Arasaki Beach

Beauty and tragedy at Arasaki Beach

Cape Arasaki is Okinawa’s southernmost point but on my recent trip to Itoman, home of the Okinawa’s last battlefield, I put off seeing it for a different unnamed point along those cliffs to look for a special memorial. Looking for that memorial led me to see a part of Okinawa’s landscape from a perspective I may have not otherwise found.

A wall of thickly grown trees blocked my view of what lay beyond the trail but there was a clear path and a tiny gap teasing a glimpse of sparking blue. Breaking through that hole in foliage, the roar of the ocean, the sight of endless blue sky and sea opened up before me as I stood at a broad cliff of Ryukyuan limestone. The uneven grey-beige expanse was lightly carpeted with green scruff and small white flowers.

Other southern beach views are from the waterline or at the Peace Park’s well-delineated hand-railed paths. Here, I could walk freely on the natural cliffs dozens of meters over the sea with a commanding view of the jagged shoreline with its craggy faces, numerous pits, caves and overhangs. Moving along, I kept stopping to observe the coastline and how shifting perspective gave different ways to appreciate the same pieces of land and sea. 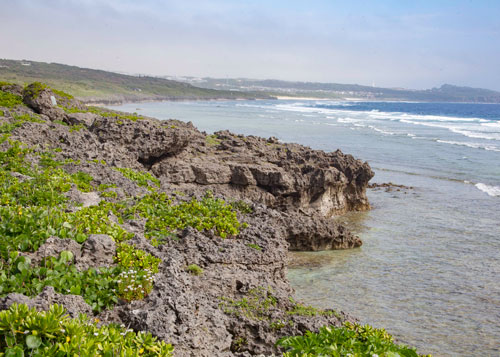 Waves crashed hard into the more distant cliffs toward Cape Arasaki but here they seemed to lap pleasantly against the coast. The water itself, like everywhere else in Okinawa was clear on top, yet beneath it was a blue-green filter over the tan sand beneath. Listening to the ocean and watching it shimmer for a little bit was rather soothing.

Except for a resting bird, I was alone up here.

The memorial wasn’t far; I could see the reflection of the placard mounted to the rock. There was a slight trace path of bare limestone leading to a set of man-made steps and the occasional patch of cement to keep walkers going the right way and giving them some degree of sure footing. The limestone is basically made of dull razor blades, so not something you want to fall on and there’s not enough green to cushion any fall.

The memorial that I’d come to see was for a tragic story from the Battle of Okinawa. During the final days of the battle the Imperial Japanese Army turned loose conscripted high school student nurses to find their own way off the battlefield. Trapped by encircling American forces moving on the last organized Japanese defenses many fled to the southern shore along with soldiers and civilian refugees.

These particular conscripts were from the Himeyuri Corps, which was composed of students from two of Okinawa’s top girls’ high schools. According to the survivor testimony of Miyagi Kikuko in the Himeyuri Peace Museum Guidebook and “Japan at War: An Oral History,” a group were in and around a small cave atop the cliffs when a Japanese soldier ducked into it. He’d just attacked some Americans and the American who followed him fired blindly into the cave, stopping once they saw it was full of girls. Their teacher pulled the pin on a hand grenade killing himself and nine students. Between the suicide grenade and gunfire 13 students and one teacher perished. It was the morning of Jun. 21; the battle officially ended the following day.

At the beginning of the battle 222 students and 18 teachers had been brought in to serve the Okinawa Army Hospital, of which, 136 died during the battle. I visited multiple caves throughout Itoman and Yaese used as makeshift clinics and hospitals conscript student nurses had served in before reaching the cliffs of Arasaki Beach.

Along the way I re-read testimonies in the guidebook, such as the story recounted above, associated with the locations. For nearly three months they lived in caves and tunnels, coming under fire from soldiers, artillery and aircraft whenever outside; an exposed cliff like this in daylight was a terrifying place. When they clawed their way up these imposing cliffs, they did so at night. One of the girls had said that she just wanted to walk freely under the blue sky with no bombs dropping around. So it felt appropriate that my trip to see where she and her classmates had lived and died would end at this memorial under a clear blue sky and being appreciative of the peaceful place that Okinawa is today. 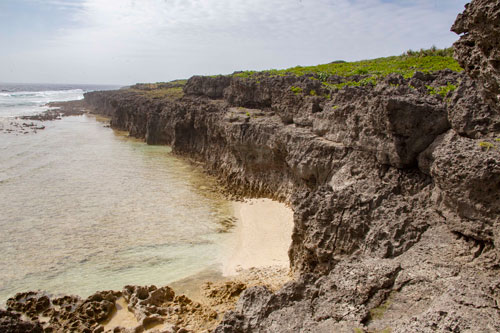 Getting to the cliffs follow your GPS or Google Maps to the coordinates below. The road is rutted hard-packed dirt; I parked a little short of the bus stop and walked an extra minute because the ruts had gotten pretty deep near the end. 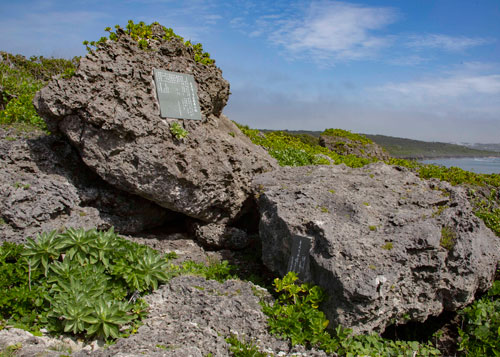