In Japan, cat lovers flock to islands known as “Neko-jima,” which are islands inhabited by many cats. There are many islands like this, including Enoshima in Kanagawa Prefecture, Tashirojima in Miyagi, and Aijima in Fukuoka. Okinawa Prefecture is also home to a few cat islands.
Ojima is one of the cat paradises you can find in the subtropical prefecture. It is a very small island off the southeastern coast of Okinawa’s main island. The island has a 1.7-kilometer circumference, and it belongs to friendly cats, which draw in many visitors every year.

There are many cats on the north side, especially around a fishing port and tempura stores. Some say that these cats either belong to local residents and tempura shops, or just settled there after coming from other locations, just like tourists. Although widely recognized as a “Neko-jima”, the island doesn’t advertise itself, so, unfortunately feline lovers, you won’t find cat-themed souvenirs here.
Access to Ojima is very easy, simply cross a 100-meter bridge from the main island.
I visited on a hot day in September. At the time, Typhoon Hinnamnor had ruined my summer leave, so I set out to make up for it with a quick getaway. 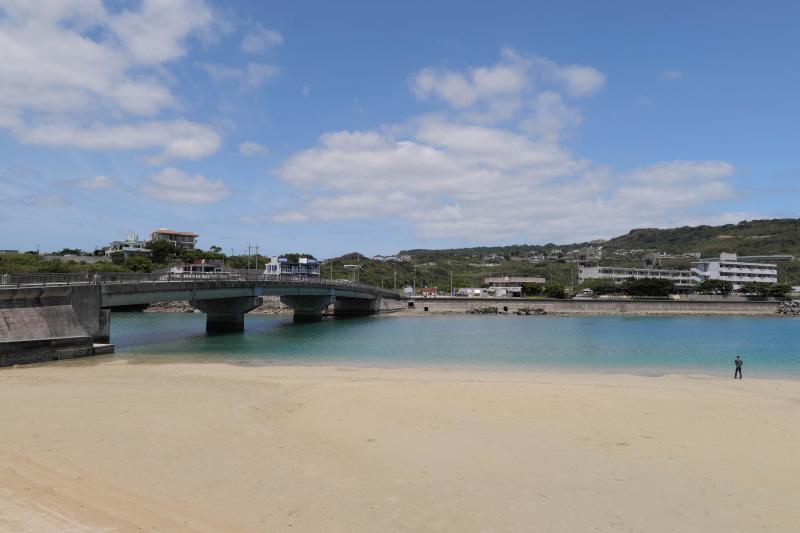 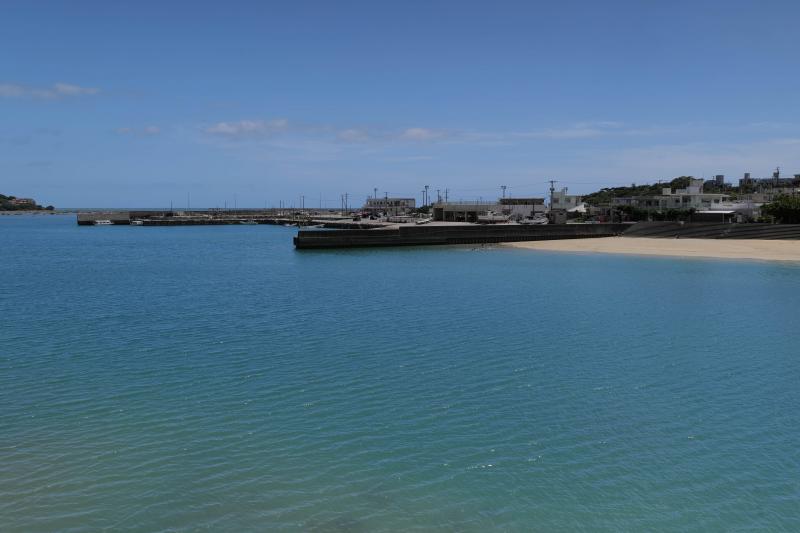 Once I crossed the bridge and parked my car near a fishing port, I headed to Nakamoto Sengyo Tempura-ten for fish tempura. On a normal day, customers would be lined up in front, but there was only one customer ahead of me in line when I visited. A notice at the counter said it all: “No fish tempura today. Due to typhoon No. 11 (Hinnamnor), we don’t have fish to fry.”
The news certainly let me down, but as I was considering what kind of tempura to order instead, I noticed a cat dozing off on the counter. Looking at its sleepy face cracked me up. I contented myself with squid and mozuku tempura (85 yen approx. $0.60 each) and headed for a beach. 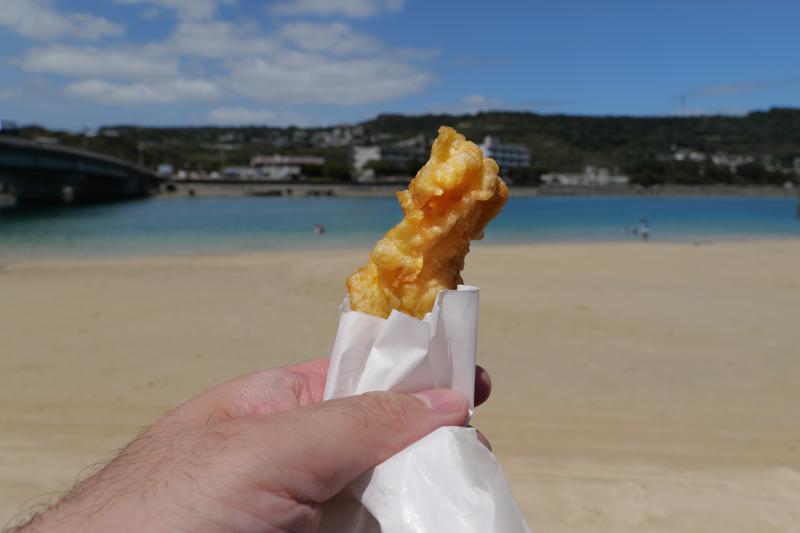 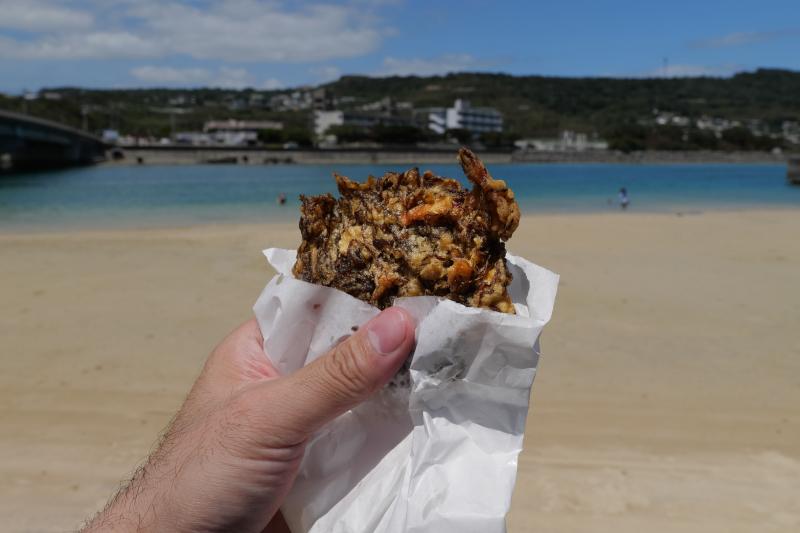 The island has a small beach facing Okinawa’s main island. Although compact as it may be, the view of peaceful waters and white sandy shore against the backdrop of green hills was a beautiful sight. The calm waters are also a great spot for kids to enjoy the beach safely, and there were some having fun when I went to the beach for my picnic.
As I was finishing my tempura on the sandy shore, I felt something approaching me from behind. When I looked back, a cat with white and brown fur snuggled up to me and began taking a nap at my feet. For a moment, I regretted that I didn’t have fish tempura to share with it, but the easy-going cat didn’t seem to mind. Later, I found an article explaining that unlike tourists, Ojima’s cats do not crave fish tempura.
For about five minutes, the cat napped at my feet until the kids came back on shore and drew its attention. 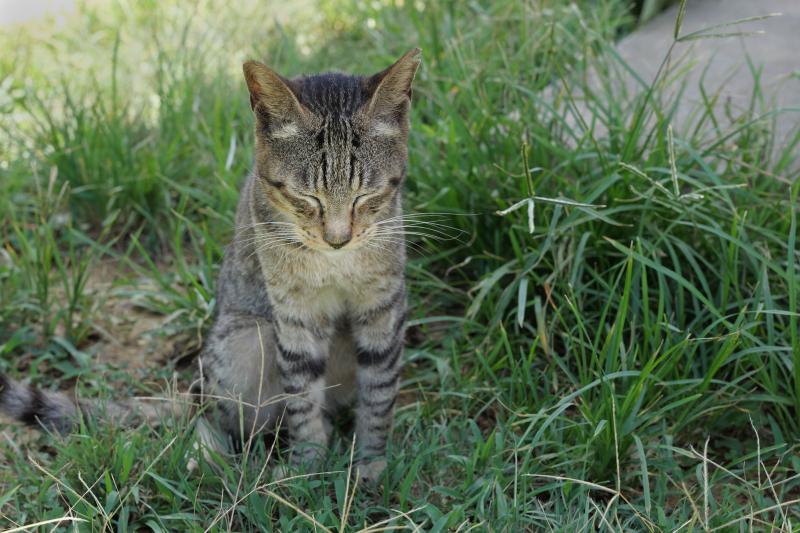 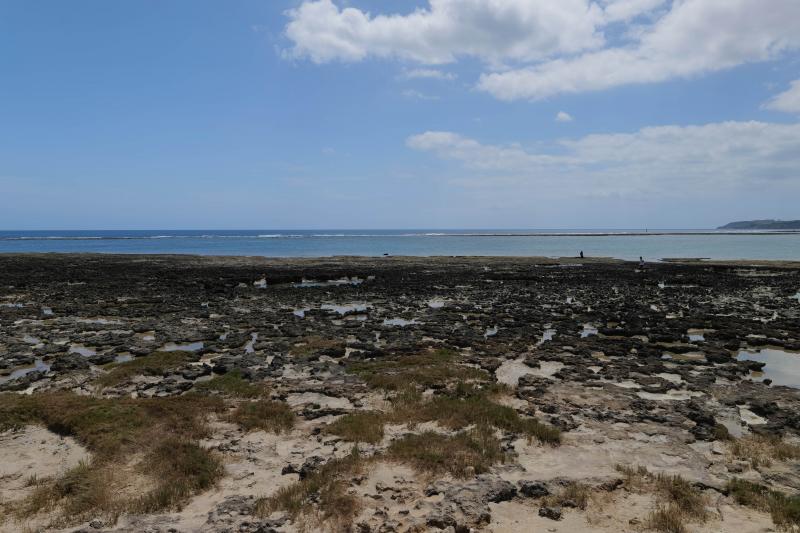 After, I made my way to a summerhouse (a place of rest with benches and tables under a roof), a spot known as a cat hangout. It was about a 5-minute walk from the beach and when I got there I found six cats hanging out under the shade.
I love cats and this was a dream come true for me. I was excited to get photos of my new furry friends.
As I was aiming my camera at one by a bench, it suddenly came up to me and stuck its nose into a pocket on my jacket. I realized that it was sniffing out my leftover mozuku and squid tempura. I quickly said goodbye to the summerhouse cats and made my way to another spot in order to avoid a full-on cat-astrophe.
My next stop was to the southern part of Ojima, where the low tide espouses some of the rocks and small fish in shallow ponds. Unlike the northside beach I visited earlier, this one was less active and had a more mysterious feel to it.
Near this beach another tempura shop was drying squid out front, probably for sale. I was tempted but decided to save it for another time since dry squid goes great with a cold beer, but I was driving.
In all, I saw more than a dozen cats at Ojima and found them to be quite friendly. I wrapped up my trip with a plan to return when I can try the famous fish tempura and visit some more cats again soon. 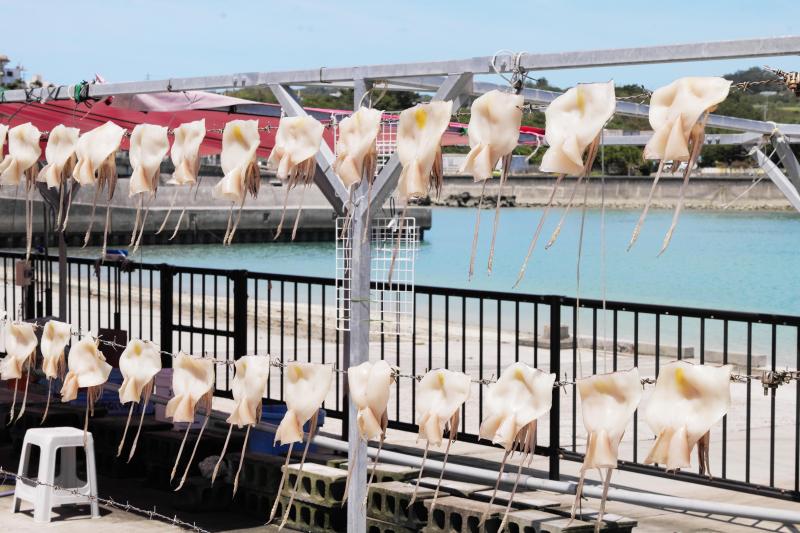 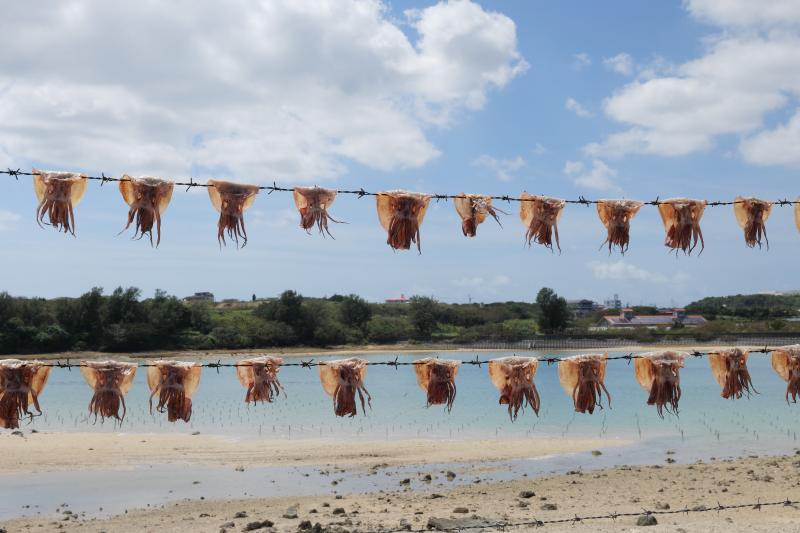 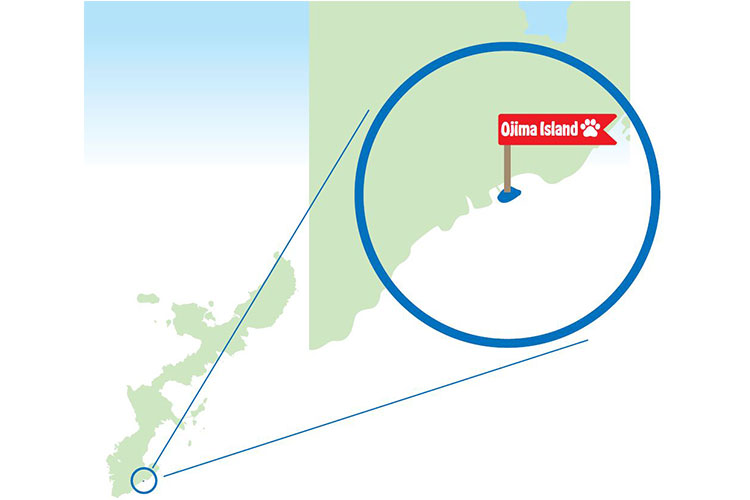 VIDEO| Ojima Island in Okinawa belongs to the cats

Hang out, eat tempura with the cool cats on Okinawa’s Ojima island

Dive into Okinawa: From deep retreats to eco tourism