When January’s cherry blossom season rolls around on Okinawa, it means it’s time to hit the road and head north.

Although there are several locations on the island for cherry blossom viewing, those in “Yambaru,” which refers to hilly areas in the north, draw special attention for a couple of reasons.

Locations in the north, such as Mt. Yaedake (Mt. Yae), Nakijin Castle Ruins, and Nago Chuo Park, draw large crowds of people looking for the earliest bloomers in the country. 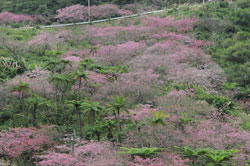 Second, the mountains and forests of Yambaru are in themselves great attractions for a quick getaway. When they are adorned with the pink color of the cherry blossoms, the dynamic nature of the north becomes even more attractive.

About 25 minutes from Mt. Yaedake, 600 cherry blossom trees add vibrant colors to Nakijin Castle. This World Heritage site is thought to have been built around the 13th century and used as a stronghold for a kingdom which ruled the northern part of the island. During a cherry blossom festival which starts on Jan. 26, the historic site is expected to be lit up at night to set an even more romantic mood.

Nago Chuo Park is known for its grand scale presentation with 20,000 cherry blossoms. The 170-acre park includes castle ruins known as “Nangusuku,” a playground, an area for hiking, and a promenade that runs through a forest and near a river.

For visitors who go to Yambaru from the middle and southern part of the island, it will most likely take a couple of hours by car. Directions are not so complicated, but they may need some explanation for first timers. To go to Mt. Yaedake and Nakijin Castle, the easiest way is to take the highway, exit at No. 10 (Kyoda), go north on Route 58, and make a left to head northwest on Route 84, which cuts through Motobu Peninsula. An entrance to Mount Yaedake will be seen to the left-hand side of the road. 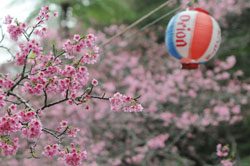 To go to Nakijin Castle, people will need to make a right on to Route 115 before they hit the coastline of the peninsula.

Nago Chuo Park is not far from Exit No. 10. Go north on Route 58 and make a right on to Route 84 at the first light after passing by an A&W. Turn left at the third signal near the Orion Beer factory and make a right at the first signal to go on a road that runs along a river. Access to the park will be restricted on Jan. 26 and 27 for Nago Cherry Blossom Festival. To go to the park for the festival, utilizing tours offered by Kadena ITT and MCCS will be a good option. MCCS offers a tour to Nakijin Castle ruins too. Starting late January, there will also be a flower festival at the Expo Park, which is not far from the above-mentioned locations.

In January in Okinawa, the average temperature is expected to be the lowest of the year. However, the flowers give a lot of reasons for people on the island to defy the chill.

“Cherry blossoms form floral stems during summer and go dormant without growing further before the new year starts,” Yoshitaka Kamiya, a member of the Okinawa Regional Headquarters of the Japan Meteorological Agency (JMA), said in an interview with Okinawa Times. “To break their sleep, cherry blossoms need to be exposed to low temperatures. To wake up Somei-Yoshino, temperature needs to be around 40s, while 60s are good for Hikan-zakura.”

Somei-Yoshio is a type of cherry blossom commonly seen on mainland Japan. On the other hand, Hikan-zakura, is found on Okinawa. Somei-Yoshino’s petals in pale pink draw a clear contrast with the vibrant colors of Hikan-zakura.

“Once awake, cherry blossoms bloom as the temperature rises. Because it takes a temperature around 40s (to break its sleep), Somei-Yoshino are not fit to grow in Okinawa,” said Kamiya.

The JMA staff also noted that while Somei-Yoshino waits for the temperature to rise before blooming, Hikan-zakura can grow and reach full bloom with little change of temperature on Okinawa. 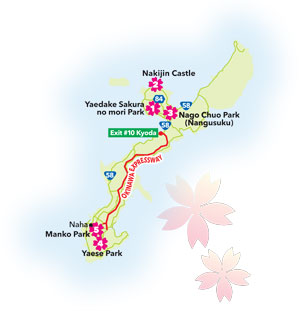 Halloween Trick or Treat on base!
Chocolat Chocolat Coffee: Easily the best cafe in Sanuki City

I scream, you scream, we all scream for Ice Cream

A buffed up buffet on Okinawa