Visitors looking for a bit of history, a bit of culture and a lot of art will find Daegu has all these literally on the wall. Located in the middle of Korea’s southeastern region, murals of Daegu and its heritage are recalling memories of the past that were long forgotten. You’ll find these paintings created by local artists in the narrow alleys of the city. 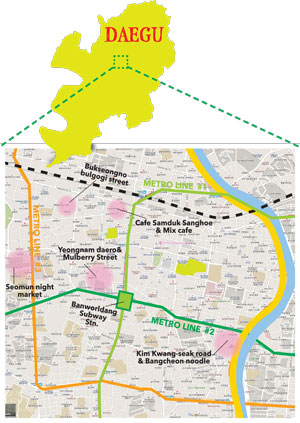 Here, you will also find a colonial-era building left untouched by the boom of development with a unique style of architecture and delicious coffee. The traditional market, which is deep-rooted in the city’s history, is still a popular shopping area for residents. Get better acquainted with Daegu’s history and attractions through the ward office’s many day trip tours. Don’t have time for a tour? Check out the list below for must-see places during your visit to Daegu.

On the Kim Kwang-seok road, located next to the Sincheon River that flows across eastern Daegu, popular folk songs from the 1980s and 1990s of Korea are streamed through speakers that are fixed along the seemingly-endless wall, creating an old-timey mood for the alley. The street is named after the late Kim Kwang-seok, a South Korean folk singer and one of Daegu’s famous sons.

Kim’s lyrics and other works commemorating his legacy fill the 350-meter-long walls of the road. 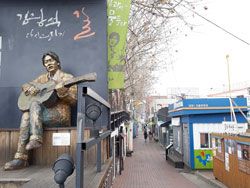 On this road you’ll also find the Bangcheng Market and you will notice a small concert hall where emerging artists perform as you walk past the murals. This small outdoor music venue is a great place to catch a break and some good tunes. Also, don’t forget to take some time to explore the many hip coffee shops and unique souvenir stores scattered around the area. Why not try on some 70s-era Korean school uniforms (7,000KRW), recalling the nostalgia of old Korea, and take a black-and-white photo with your friends? 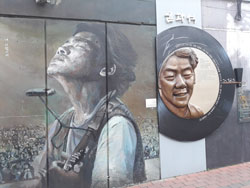 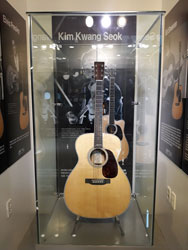 The alley will transport you back to the 1980s and 1990s and there is even a “slow mailbox.” Write a letter to yourself or your loved ones and drop it in the box. Expect to receive your letter in a year as a way to meet the person you were a year ago. A faded public phone from a bygone era still lets you make calls, so give it a try and leave someone a lovely message. At the end of the street sits “KIM KwangSeok Story House,” a cozy venue decorated like the house Kim lived in where you can listen to his songs. Although his songs are in Korean, Kim’s voice is appealing and his contemplative lyrics on social and political issues were extremely popular in the country. Though you may not understand the lyrics, Kim’s work might still manage to draw you in. By the way, the street is a great place for a date night or family stroll. 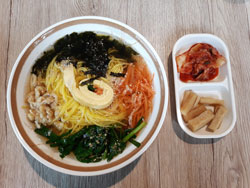 Bangcheon Noodles, located between Kim Kwang Seok road and Bangcheon market, is a restaurant specializing in noodles and Korean pancakes. Unlike the hip graffiti outside the restaurant, the cooks are all about tradition and make their noodles with gardenia seed, a traditional Korean ingredient. For a few more won, try their signature menu, which means your noodles are topped with a rolled egg omelet, seaweed and herbs (5,000 KRW). They also serve a delicious and pretty tri-colored Korean pancake (7,000 won) which pairs well with makgeolli, a Korean sparkling rice wine (3500KRW). The Gaon-milmyon restaurant across the street is also a good option for wheat noodles. 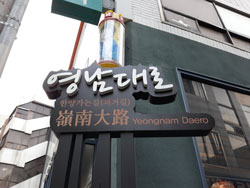 Behind the Hyundai Department Store in the middle of Daegu, you’ll find the Yeongnam-daero, one of nine major roads that connect Busan and Seoul. The road, which dates to the Joseon Dynasty of 1392-1887, was once a major artery for transport. Scholars from the Yeongnam region seeking to become government officials also once used this road for their 30-day commute to Seoul on foot to take the civil service exam. 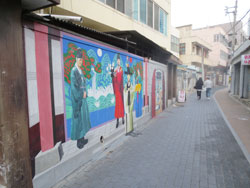 Today, the Yeongnam-daero is only a fraction of the “big road” its name suggests. Murals in this valley depict the most important moments of a scholar’s trip — the sendoff to Seoul and the triumphant return after he passed the exam. Other murals portray locals’ everyday life, and the skill of the artists give the paintings an almost 3D-like effect. The road here isn’t very crowded, so feel free to take your time and enjoy the artwork. After, history buffs will want to head towards Mulberry Street.

Named after the famous trees that were said to once grace this area, Mulberry Street now only has the murals illustrating what it once looked like. The area was once home to General Du Sa-Chong of the Ming Dynasty. The general was dispatched to Joseon during the Japanese invasion of Korea in 1592, but stayed behind, became a naturalized Korean and made his living planting mulberry trees. This area is rich in history and art, making it a draw for tourists and artists alike. Throughout the years, this has been home to many artists, including poet Lee Sang-hwa, painter Lee In-sung and novelist Hyun Jin-gun. This is also a great place to venture past the mural streets in search of the old Daegu’s hidden gems.

Subway
LINE1,2: Banwoldang station Exit 15~18, walk to the back alley of the HYUNDAI shopping mall. 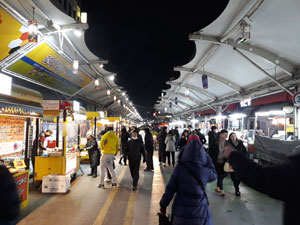 The Seomun Market, on Daegu’s west side, is the city’s largest night market, stretching 350 meters and featuring over 80 kiosks selling a variety of food and goods. 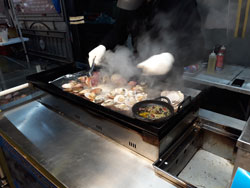 Finding the market is easy as its bright lights and big crowds are difficult to miss.  A hot spot for people-watching and entertainment, the market is known for its many fabric and textile shops. According to the market website, it also serves as a start-up incubator, helping to create a sort of old-meets-new atmosphere while young entrepreneurs try their hand at business.

Visitors to the market can sample a variety of street foods from different countries. Many of the market regulars know to line up early in front of their favorite stalls. Some do it even before the grill is heated! A variety of dishes ranging from Korean, Japanese, Chinese and Western cuisines tickle people’s palates at Seomun. No matter how picky you are, you’re sure to find something delicious here (from 2500~6000 KRW). 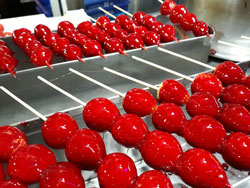 Among some of the treats you can get at the market, Tang Ho-lu, or sugar syrup-coated strawberries, are a popular sweet.  Also, while you’re here, try the “Yachae-ttungttaeng-samgyeopsal-mari,” a popular grilled vegetable and pork belly Korean dish (2,500KRW) you’re guaranteed to have to wait in line for.

As you make your way deeper into the market, you’ll find a performance stage which often features some type of musician or musical act. There is also a tent where you can sit and eat away from the chilly weather. Many of the shops change frequently, so there’s always something new to see. If you are visiting Daegu, Seomun Night Market is a place you definitely should not miss. 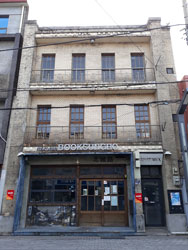 In the early 1900s, Daegu’s fortified wall was destroyed, opening more real estate so Japanese businesses could expand what was once one of Daegu’s largest commercial districts. In the late 1940s, after independence, the area became somewhat of a tattered place with merchants selling tools and equipment, including those from the U.S. military. During this time, most of the movie theaters and department stores with Japanese architecture from the bygone era also began to disappear.

Today, Booksungno is breeding new blood as the area’s inexpensive rent and interesting architecture are drawing young artists and new businesses in alongside the old tool shops. Café Samduk Sanghoe and Mix Café are two of these newcomers. At Café Samduk Sanghoe, you can enjoy a coffee (from 3000 ~ 5000 KRW) inside a tatami room overlooking a Japanese courtyard garden. The café’s 1930s-era Japanese building was once a tool shop that sold wire and rope. 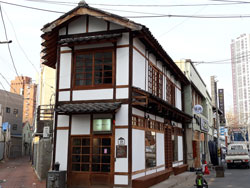 Down the street, don’t let Mix Café’s dingy exterior discourage you from stepping inside. This café has two buildings, one from the 1950s and the annex building built in 1910. Aside from offering a spacious, comfortable spread, the 50s-style décor of the main building and the contrasting Japanese décor of the annex, make it a great place to hang out and explore. While you’re in the main building, check out the view of their wine cellar housed inside the building’s former basement air-raid shelter. The coffee at both cafes isn’t great, but their atmosphere makes them worth a visit.

While Buksungno may still be a tool alley during the day, at night watch the area convert into a bulgogi-lover’s paradise. Bulgogi fans will want to stop by as this is a local favorite for grabbing cheap bulgogi, udon and a soju (8500 KRW + 3500 KRW for soju). Gentrification pushed the bulgogi wagons out, but the area is still a popular place to drink and eat like a Daegu local.

Subway
LINE1 Daegu station Exit 2. Walk down to the NH bank after crossing the crosswalk, and then cross to the opposite side and walk along the street.

Hover over Okinawan waters on a flyboard