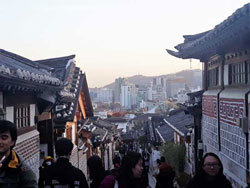 I had a simple assignment: Take a day trip to Seoul and write about it. No problem. So, on a recent chilly morning, I hurried to Pyeongtaek Station and jumped on a subway to Seoul.  I was really excited about the idea of covering Seoul for our readers. And, of course, I was really confident because I am Korean and I know my territory.

However, my excitement turned to despair when I looked up from my Android to discover I had arrived in the port city of Incheon, which is quite far from Seoul! It felt like the whole world had crashed down on me when I heard the name of the strange city announced on the train.

So, where did I, the guy whose job is to show our military community how to explore and enjoy my country, screw up? 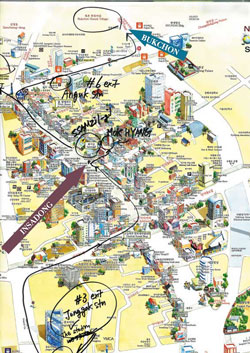 It’s simple: I took the subway instead of the train. If you want to go to Seoul from Pyeongtaek, take the train (1 hour)! Otherwise, you’ll end up hearing all the names of subway stations on Line 1 in Gyeonggi-do and southern Seoul for two hours just like your tour guide (that’s me) did.

Although my day trip took a detour, it ended being one filled with many highlights. I walked a 700-meter-long street packed with shops and restaurants, as well as alleyways that took you every which way.  I also visited the palaces of Joseon Dynasty and Bukchon, a neighborhood filled with homes that date back 600 years.

There were many other things I experienced during the day, so read on. And remember, when you set off on your own day trip, make sure you are taking the right train.

Despite being a historical city that is more than 600 years old, it is not easy to find traces of Seoul’s beginnings. Many traditional buildings and homes within the city have been disappeared since the 1960s due to the rapid urbanization in Korea. 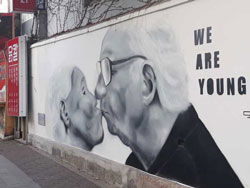 But there is a place among Seoul’s skyscrapers and dense modern buildings, that allows a glimpse into how the city looked and how people lived a few centuries ago: Bukchon.

On the upper side of Bukchon, a Hanok village nestled on a slope, there are homes dating back hundreds of years. This area was traditionally where the wealthy and government officials lived. Their ceramic-tiled roofs and wooden frames stand out. Although modern Seoul is only a turn of the head away, it’s like walking back in time. It’s amazing how the modernly-altered streets and alleys below harmonize with the old village homes, a nice blend of modern and traditional architecture. 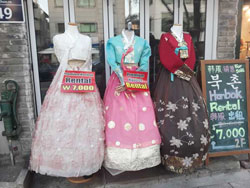 Before reaching the main alley, you can easily spot small hanbok rental shops where you can rent traditional clothing to walk the streets in. Lots of people were doing it and seemed to enjoy taking lots of memorable pictures. This village also offers various experience programs like craft making and Hanbok alterations.

As for the neighborhood of old homes, although it is a tourist attraction, it is also a residential area and people actually live in live in the homes! Please be respectful, keep your voices down and hold  and hold the hands of your children.

You can reach the neighborhood in 10 minutes on foot from Exits #2 or #3 at from Anguk Station on Subway Line 3. 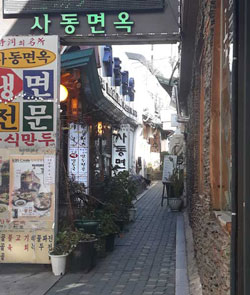 Insadong Street has roots dating back to the 16th century and originally was a residential area. However, during the Japanese colonial period and beyond the Korean War, it became a place where artists gathered and people came to buy and sip tea.

Since the 1988 Seoul Olympics, this area has become a traditional heart of Seoul. Renovated in 2000, this hip and happening place is full of craft and tea shops, traditional food and clothing shops, art galleries and countless restaurants and food stands.

The charm of Insadong can be felt from the moment you step foot into one of the many narrow alleys that stretch out like a tree branch from the main street. It’s like you’re on a treasure hunt. You might find a hidden restaurant or shop that catches your eye when you step into a small alley.

Unlike the refined appearance of the main street, food joints and tea shops in antique buildings (many look like old homes) are hidden inside the alleys. The district also has museums devoted to Kimchi and traditional tea. Great places for foreigners to learn more about Korean culture. 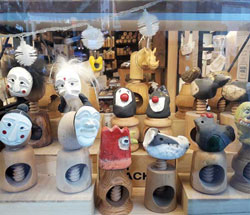 The easiest way to get to this street is by getting off at Anguk Station on Subway Line 3, Exit #6.  Once you get off the subway, you can easily find the information center for tourists. (You can’t miss it!) But Exit #6 is not the only way to Insadong. If you get off at Jonggak Station, line 1, exit #3, you will walk by a crafts shop that sells clocks made of melted recycled bottles. Very cool and perfect for a gift for a family member or friend.

On Insadong’s main street, this spiral-shaped, four-story building is packed with more than 70 businesses, including craft and souvenir shops, galleries and cafes. This place is a little slice of hipster heaven where the old and new coexist, and where strangers have plenty of opportunities to strike up a conversation.

Before you make your way upstairs, take the stairs down to a basement where you’ll find several workshops that allow you to try your hand at making pottery, jewelry boxes, bracelets, keychains, and other things.  You’ll need to sign up, so head to the basement first.

As you make your way back up, you’ll notice a gently-sloping ramp around the central courtyard, which eventually leads to the rooftop. But before you get to the top, you need to check out all the eye-catching shops. The distance from the first floor to the top as you make your way around is about half a kilometer. It’s a nice walk and is a great place to take photos.

As you make your way to the top, check out all the graffiti-laden walls. There are thousands of signatures and doodles from people who have come before. When you finally reach the top, you’ll probably be pooped, so you might as well take a break at a cafe that pays tribute to all things poop. 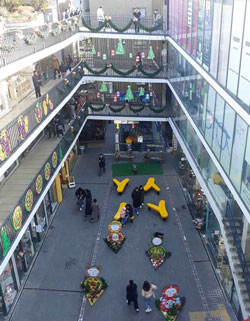 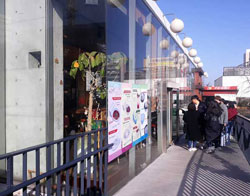 “Well, that’s a bunch of crap,” I laughed to myself as I zeroed in on the exterior of Ddong Café in Insadong. 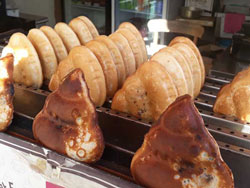 Literally, there was a bunch of crap adorning the outside of the building. But it was fake dung, and it was cute.  I’ll admit that I’m not big on potty talk, but I did get a kick out of this café that prides itself in its poo products, from cartoon faces made in the shape of feces to toilet-shaped mugs.

The first thing you need to know is the place is clean, and the aroma that swirled in the air was of delicious coffee and cakes. Not nasty Number Two.

Drinks range from 4,800 to 7,000 won and are served in a toilet-shaped mug upon request. There is a variety of food and drinks on the menu. And although I’m sure the spaghetti with meat sauce in a toilet- shaped bowl is tasty, the prude in me thought the look was a little too realistic, if you know what I mean.

But, if you want to talk about poo and have a laugh or two, give Ddong Café a try. It’s a great place to relax with friends or ponder the essence of poo alone. 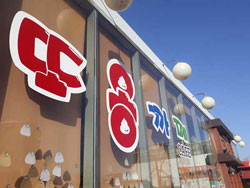 Directions: From Anguk Station Exit 6, take the first left into Insadong and continue down the street until you see the Ssamziegil complex on the left. Ddong Cafe is on the fourth floor. Just look for the poop. 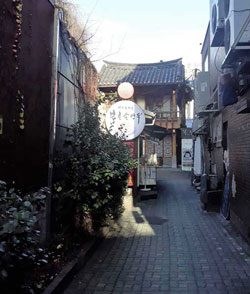 Mok hyang is a famous traditional tea house that is located just behind the Ssamzie-gil complex. A traditional two-story, tiled roof house, Mok Hyang is a good place to take a rest from shopping and sightseeing. You can choose from a wide selection of teas and traditional cookies and sweets.

The tea house was designed by its owner Kim Ji Seon, a friendly woman who said she wanted to create a place where people could relax and rejuvenate. The wooden tea tables and pottery lining the walls gives it an air of rustic elegance. It was very relaxing sipping on tea as I looked out the windows. And that’s just what the owner wants.

“As a child, I was naturally interested in tea materials because my mother was a herbalist,” said Kim, who started the business in 2009. “I have served many foreign customers with various tastes. Some traditional teas are too bitter for them to drink. So, I usually recommend Ginseng with honey tea or Chrysanthemum tea to them.”

There were a few foreigners enjoying those drinks the day I visited. Everyone seemed to be enjoying their tea and conversations. 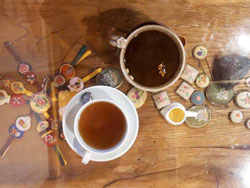 As for me, I chose Jujube Ginger Tea (7,500 won), hoping for the same taste of the tea my mother made me during the winter when I was a child. This tea is known to contain a lot of ingredients to help you sleep. (If you have trouble sleeping at night, try this one!)  All drinks are in the 7,000-8,000 won range, just like other tea house in the area. The tea house also hosts occasional cultural events. 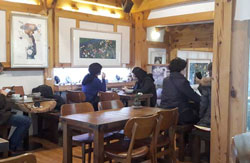 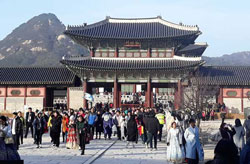 During the Japanese colonial rule, most of the palace was destroyed. Much of what you see today are accurate reconstructions.

The main attraction here is the Changing of the Guardians at 10 a.m. and 2 p.m. daily at the main entrance. This solemn ceremony that dates to the Joseon Dynasty, features amazing uniforms and drums. Then head into the palace grounds to view the elegant palace. Make sure to check out the Amisan Garden, Geunjeongjeon Hall and the living quarters.

Though the entrance fee is minimal, wearing a traditional Hanbok will grant you free passage into the palace. 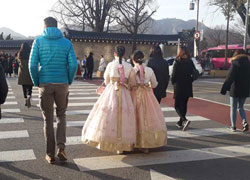 There are many Hanbok rental shops around the palace. It would be a great opportunity to embrace Korean culture and the colors also look amazing in photos. It’s all about the photo ops! 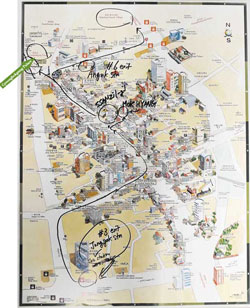