Today, bottled green tea is readily available in convenience stores and supermarkets all around the world. Starbucks and coffee chains even include matcha frozen drinks, hot and iced green teas as part of their permanent menus. Whether sweet or not, hot or cold, there are no bounds to how you drink this staple beverage. However, despite its mainstream popularity, matcha tea still holds a special place in Japanese culture and the traditional tea ceremony.

The tea ceremony known as sado, which means “way of tea,” involves serving matcha tea paired with traditional sweets to bring out the rich tea flavor. At Cha Cha Cha, a five-minute drive away from Gate 2 of Kadena Air Base, visitors can experience this ritual and even do so dressed in a kimono, as is custom. 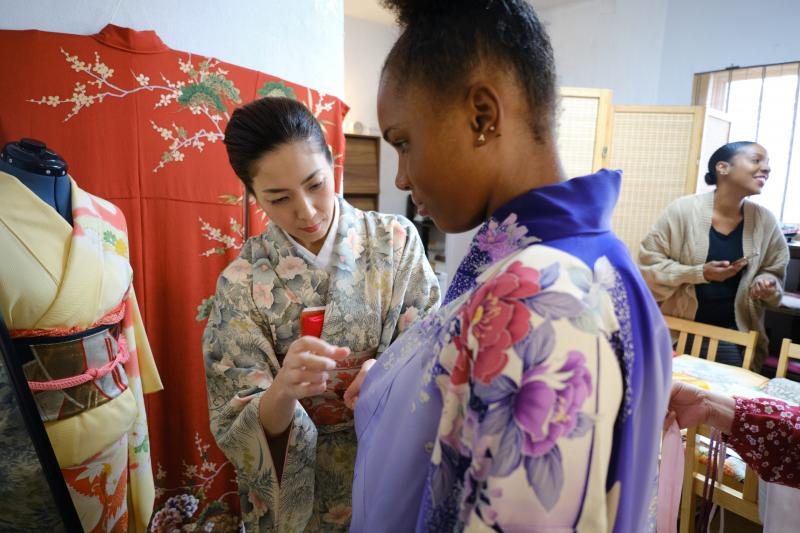 First, the women chose from the many kimonos Cha Cha Cha keeps for ceremony participants. There were dozens of beautiful and colorful fabric to choose from, and instructor Kaori Kuwae’s masterful kimono dressing and tying skills were impressive and fun to watch.

In no time, the four ladies were dressed in their fancy kimonos and posed for photos.

Next, we entered the chashitsu, or tearoom, the size of five tatami mats through a door called a nijiri-guchi, which is wide enough to let one person through but in a crouch. The concept behind the design of nijiri-guchi, Kuwae explained, was to allow the person walking through to enter with a humbled spirit. We entered and sat on our knees facing Kuwae on the soft tatami mats.

The ceremony commenced with Kuwae pointing to a hanging scroll with the calligraphy “一期一会” pronounced “ichigo ichie,” and means “once in a lifetime.” This calligraphy is a reminder to live in the moment as the participants here and now will not come back to this moment when it’s over. 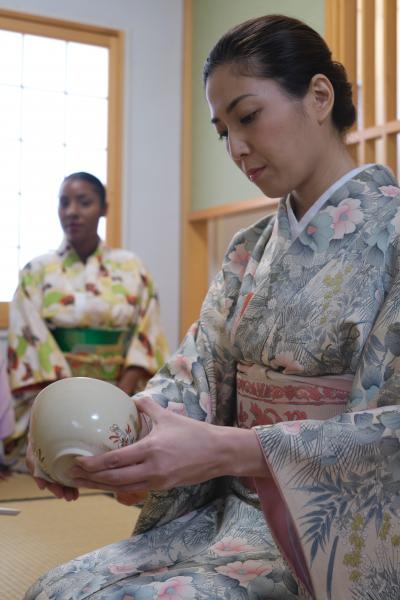 Before preparing tea, the host purposely treated the guests to pink confections made of mochi and bean paste first.

“Matcha powder (for green tea) contains no sweeteners and is served unsweetened, so guests eat sweets first,” Kuwae said, adding that the confections vary depending on the season.

Once Kuwae started brewing green tea with matcha powder using a chashaku (bamboo teaspoon) and a chasen (bamboo whisk), a silence set in. The boiling sound of water reverberated throughout the tearoom.

Just as there were specific reasons for entering the room the way we did and having sweets first, so were there manners and steps to follow in sipping the prepared tea. To accept the tea, we learned to say osakini choudai itashimasu, which means “Excuse me for going before you, I will partake of the sweet” and oshouban itashimasu, which means “I will join you.”

In addition, before drinking out of their bowl, participants are supposed to rotate it twice to avoid drinking from the beautifully painted and drawn portion of the vessel.

To commence, these steps were done by each guest one-by-one. After the tea, another confection was served and Kuwae allowed each of the women to practice the role of hosting, including brewing the tea.

“It was fabulous, I had a great time,” Kattrina Rainey, a participant from Camp Courtney who along with her daughter, Victoria, joined to learn about Japanese culture.

For Rainey, the steps for sipping the tea or serving it weren’t difficult, it was sitting on her knees in a kimono which proved challenging.

Margaret DeTrinis, another participant from Camp Courtney who also joined with her daughter, Jordan, said it was a good experience and she enjoyed wearing a kimono.

“It was very comfortable,” DeTrinis said, but agreed with Rainey on the sitting position: “That was definitely uncomfortable. My legs were going numb. I can’t imagine sitting like that for four hours that [Kuwae] was saying she has to do.” 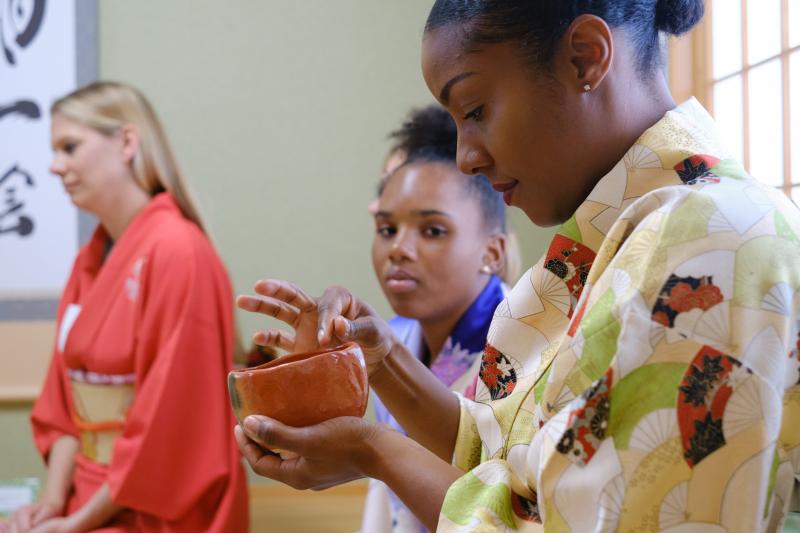 Although Kuwae didn’t mention the long period of time sitting in an uncomfortable position, she did mention she has been hosting tea ceremonies for almost 10 years. Kuwae, in a reference back to the scroll from the beginning, signaled that not only is there a difference between learning to host a tea ceremony and experiencing it, each ceremony is different as many elements including Zen and yin and yang determine the tone of each one.

Learning the intricacies of the tea ceremony takes a lot of dedication, but the hands-on experience at Cha Cha Cha is meant to be an opportunity to relax and enjoy the custom. And though back in the old days, Kuwae said, only men were allowed to practice the ceremony, today women seem more drawn to the experience.

“Sometimes we hear about wives who want to come here. But their husbands are not interested because they don’t think dressing in kimonos and having tea sounds interesting,” she said. “However, once they come, the husbands find there is much more to learn and try than they imagined.”

After the Camp Courtney ladies had their ceremony, I was able to try my own with Kuwae. I picked out a kimono for men and was helped into it. I entered the tearoom as before and in the quiet tearoom Kuwae and I tried the tea and sweets.

As I sipped my tea and sat in position wearing this lavish clothing, feeling like a samurai, I definitely understood what the scroll meant by saying this was once in a lifetime.

*Please utilize the hand sanitizer auto-dispenser located at the entrance.