Exploring Okinawa: Hang on for fun at Forest Adventure Onna!

Exploring Okinawa: Hang on for fun at Forest Adventure Onna!

On a sunny winter day in Okinawa, I made my way to Onna Village for my first try at something I had considered a bit of an extreme sport: ziplining.

All I was expecting was a few exhilarating rides from platform-to-platform. My first try at this, however, turned out to be more challenging than that.

After signing in at Forest Adventure Onna’s reception desk and getting fitted with a harness, I was guided to the foot of a launching pad for a safety brief. An instructor showed me how to use two kinds of hooks: carabiner and pulley.

A carabiner is a metal loop, one portion of which is spring-hinged to connect it to another hook or a wire. I had seen mountain climbers use this tool. The pulley, on the other hand, came with wheels, which was supposed to let me glide on a wire. There were two carabiners and one pulley attached to my harness. The carabiners are magnetized for safety reasons to prevent the hooks from being detached simultaneously from the wire.

After the safety brief, I climbed up to a launching pad to start my tour.  For the first time, a sense of fear spread over me. Looking at the forest down below, I became aware of how high up I was. Still, the ocean, which shined in vibrant blue ahead and beyond, had a calming effect.

This adventure was supposed to take about 2.5 hours and since I had another appointment after, there was no time to procrastinate or delay any longer. I sprung off the foothold and my mind went blank. As I was gliding in the air, I couldn’t feel anything but the tremendous speed. Before I could feel anything else, I was sliding on sawdust at the landing point. After this first portion, I was hooked and in search of the next zip-off point.

One step onto the first suspended bridge and my body started to bounce on a wire as if I were on a mechanical bull, making it difficult to advance more than several feet at a time. The slow progress was opposite to the speedy ride on the zipline. As I struggled on the bridge, my mind could not wait for the shaky time to be over so I could enjoy another exhilarating zipline ride.

A test of balance, the course included several suspended bridges with different features. Some were equipped with footsteps tied to the wire, while others required a walk on a wire less than 1-inch-thick.

The deeper I got in the course, the more challenging even the ladders leading up to the launching pads became. At first, it didn’t seem like a big deal, but I was getting tired and the climbs were becoming more daunting. More often than not I had to rest for several minutes before reaching a launching pad.

The last portion of the tour was called “Adventure Course,” featuring a “Tarzan Swing.” This swing meant I had to hold onto a rope and swing in the air in a pendulum movement to reach a climbing net on the opposite side. My sense of fear was renewed with this different challenge.  I recalled some Spider-Man movie to simulate the move in my head. However, once I threw myself in the air, I was reaching the climbing net before I could summon any superhero power or courage.

This portion took a lot out of me and there were still a few more suspended bridges and one last zipline to go!

One of the remaining bridges involved gymnastic metal rings and my legs started to cramp. Luckily, there was another bridge with steady wooden footholds, which, I guess, the park installed to help those, like me, who were too tired to go for any more challenges.

After the last zipline ride, I was relieved to learn that I’d made it to the end of the course. All-in-all, this feat took me about 1.5 hours to complete. Although I struggled with suspended bridges and ladders, my racing mind toward zipline rides seemed to have quickened my pace.

After weeks of working from home, my lack of exercise and balance perhaps made me sweat more than necessary at the Forest Adventure Onna. However, I felt very much refreshed and alive in nature. It was totally worth my sore arms and legs. 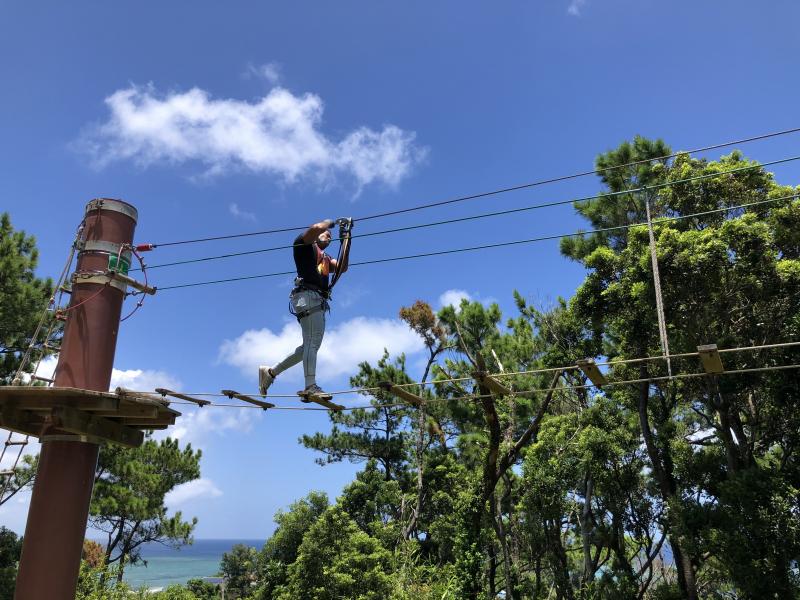 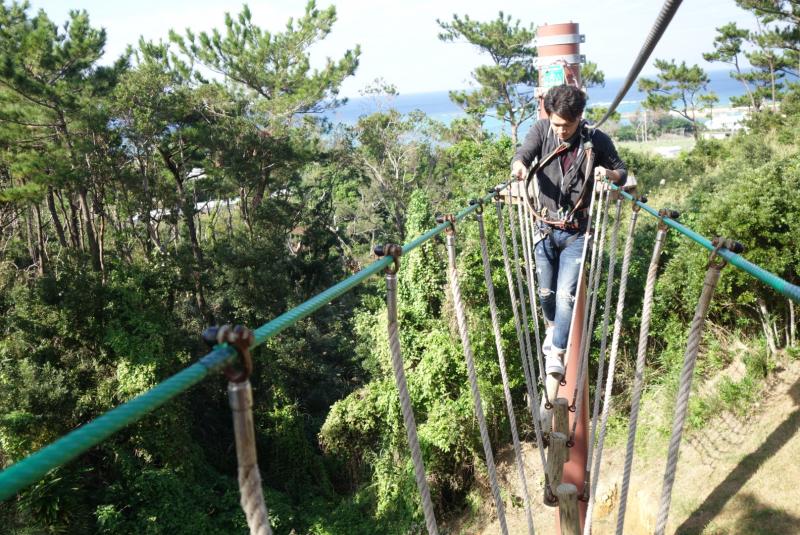 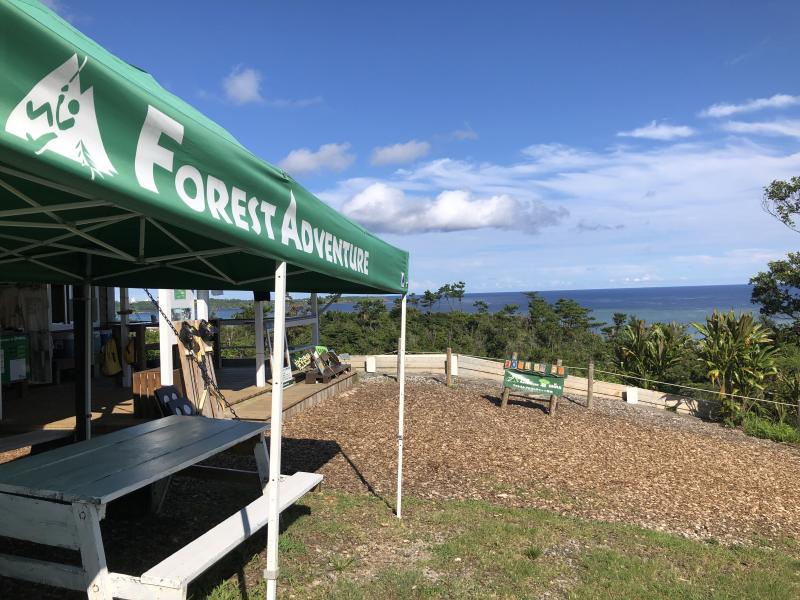 *Reservation recommended. There is no cancellation fee. A visit without a reservation can put you behind a large group on the wait list and possibly make you miss a tour opportunity.

*In case of inclement weather, the park can be closed.

*Participants need to be 4’7” or taller, or a fourth grader in elementary school or older.

*The maximum acceptable weight per person is 285lbs/130kg.

*Junior high school students and under must be accompanied by supervising adult (18+).

*One adult (18+) can supervise up to three children.