Exploring Okinawa: Hop on a ferry to enjoy the wonders of 'Carrot Island'

Exploring Okinawa: Hop on a ferry to enjoy the wonders of 'Carrot Island'

Though famous for its carrots, Tsuken Island has other reasons it’s a worthy destination for a daytrip. From White Beach Naval Facility, Tsuken Island can be seen along with other offshore islands such as Hamahiga and Ukibaru. This remote island can be accessed via a 30-minute ferry ride from Heshikiya Port on Katsuren Peninsula.

On a Monday in late October, I paid a visit there for the second time in my life. The last time I went there was almost 40 years ago. So, I was curious to see what the island looks like now.

I boarded my ferry at 11 a.m. and paid 1,240 yen for a roundtrip ticket (approx. $10.10). The ride was a smooth one without uneasy choppy waters. On the ferry with me were a few groups of tourists, but nothing compared to the crowded ferries on pre-pandemic weekends.

As soon as I arrived on the island, I went to a small store nearby to rent a bike for 500 yen. Bringing my car on the ferry was an option, but a bike seemed the best option for touring the small island with a 7-kilometer circumference. Another plus was that all the spots I visited could be accessed for free and I wouldn’t have to pay for parking.

While locals and visitors are still traveling to the island, it is probably a good idea to plan ahead and bring picnic items with you. The restaurant near Tomaihama beach was closed when I visited due to COVID-19 precautions. During my visit, I also noticed shops on the island selling drinks and snacks but no bento meals, so I bought some bread at the small store as it was close to lunch time when I arrived. If you would like to picnic on the island, Tomaihama Beach, Shinugugama, and Yajirihama Beach are good places to go.

My first stop was at the Hotoga Spring, a well on the western coast and about a five-minute bike ride away from the rental shop. The meaning behind the name of this spot is a “spring of pigeons,” as a legend holds that the well was discovered by a pigeon. To get there, I had to carefully walk down a set of steps on a steep slope. At the bottom of a cliff, almost hidden by surrounding rocks was the well.

The ocean views from the spring were mostly vibrant blue and seemed unaffected by the recent eruption of an underground volcano near Ogasawara Island almost 1,000 kilometers away. There have been reports of pumice stones surfacing on coasts around Okinawa, but here there was a slight grey or pink tone, but not much difference.

The mouth of the well looked more like a cave. Previously reinforced with concrete by the locals, some of the concrete had crumbled, giving it a rustic, prehistoric look. According to the Okinawa Prefectural Government, the well was once a precious source of potable water for islanders.

Back in the old days, it must have been difficult to reach this hidden spot for water. Today, this area retains a special feeling because of the unusual environment and its backstory. 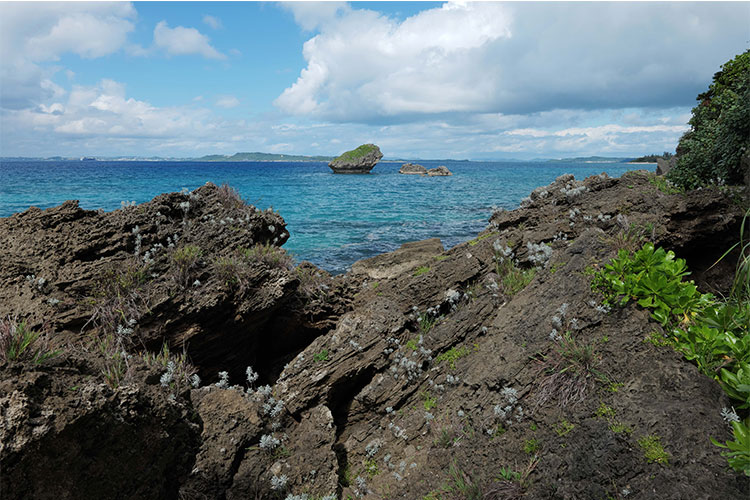 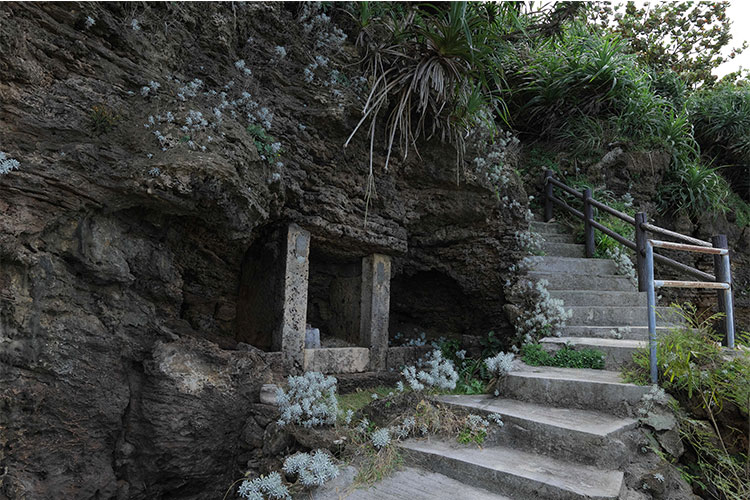 After getting low at the spring, my next stop took me high above the island’s west coast. I visited Ninjin Tenbodai, or carrot observatory. This three-story structure is the tallest spot on the island and stands at 39 meters (approx. 128 feet) above sea level. From the top story, which adds roughly 10 meters to the height, I could see the long stretch of the sandy shore below and also Katsuren Peninsula. Around the observatory, there were no stores or shops, but I enjoyed the environment. 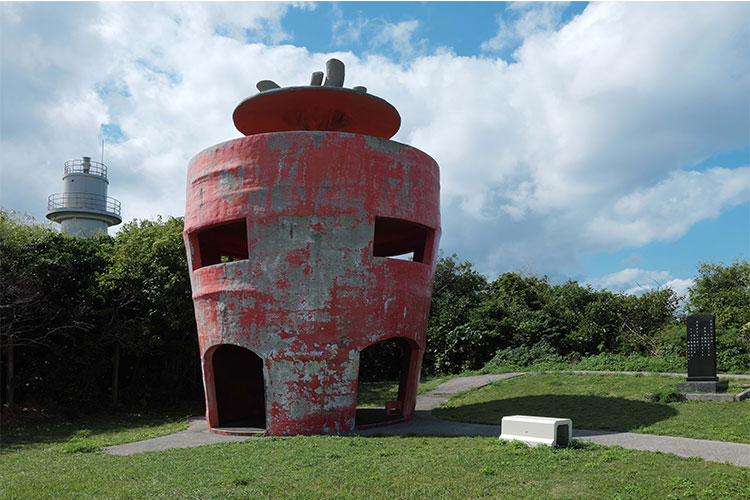 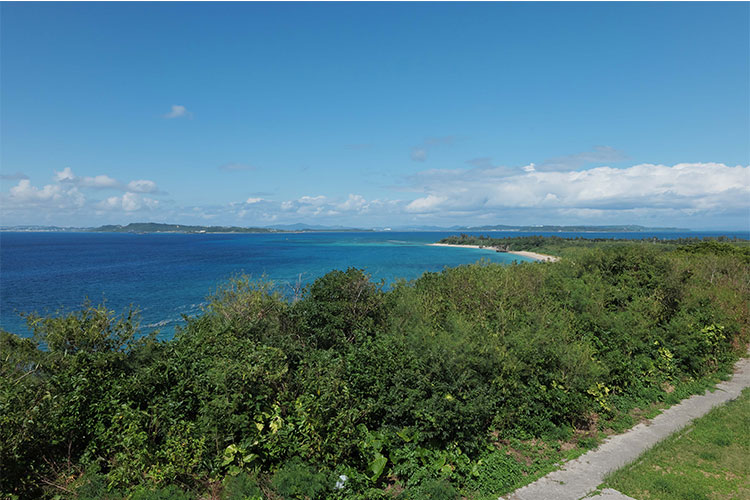 After my bird’s-eye view of the area, I rode my bike for five minutes to arguably the most popular spot on the island — the beach. Covering one kilometer along the island’s western side, the sandy shoreline is a picture-perfect place for a beach day. The vibrant blue of the water and white sandy shore provides an ocean view that would be hard to find anywhere else. Unlike Okinawa’s main island beaches surrounded by thick bushes, Tomaihama Beach’s neatly trimmed trees gave the area resort vibes. 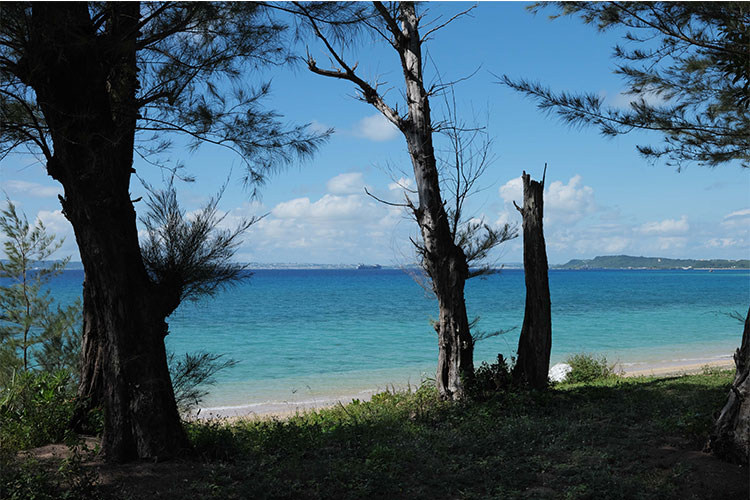 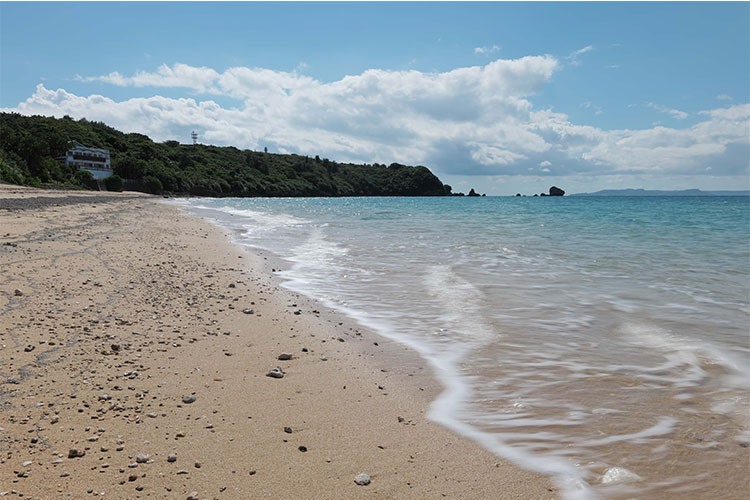 After enjoying the beach, I pedaled my bike north to a place with a curious landscape and legendary story. Along the way, I saw some of the fields where the island’s famous carrots are grown.

As you reach Shinugugama, you’ll notice how the large rocks divide the sandy shore. Weave through these massive stones and head south until you reach a huge rock wall on your left with the mouth of a cave at the bottom. This is thought to be the birthplace of Akainko, a fabled figure who was a master of poetry, music, and architecture during the 15th and 16th centuries. Akainko is thought of as the father of music using sanshin, a traditional Okinawan string instrument.

According to Ryukyu Shimpo, legend has it that Akainko’s mother was from Yomitan Village (now the host municipality of Torii Station) and hid at Tsuken Island during her pregnancy to avoid danger.

With the rock wall curving as if to hide the cave, this location does look like a safe spot to hide. Whether you know the legend or not, Shinugugama is a special place worth exploring. 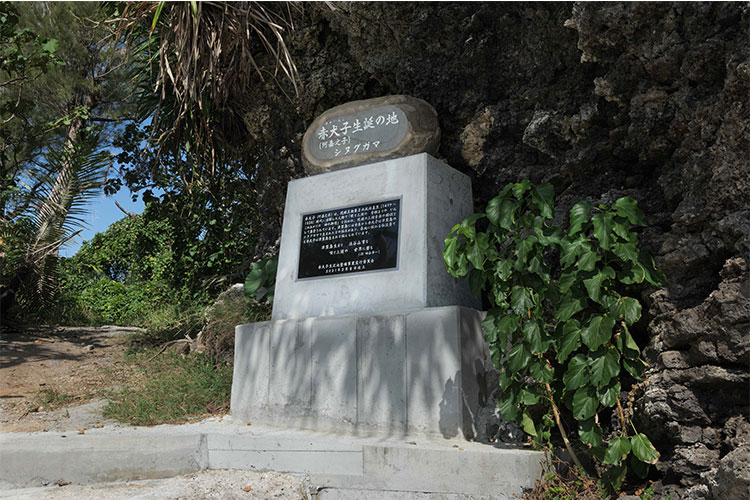 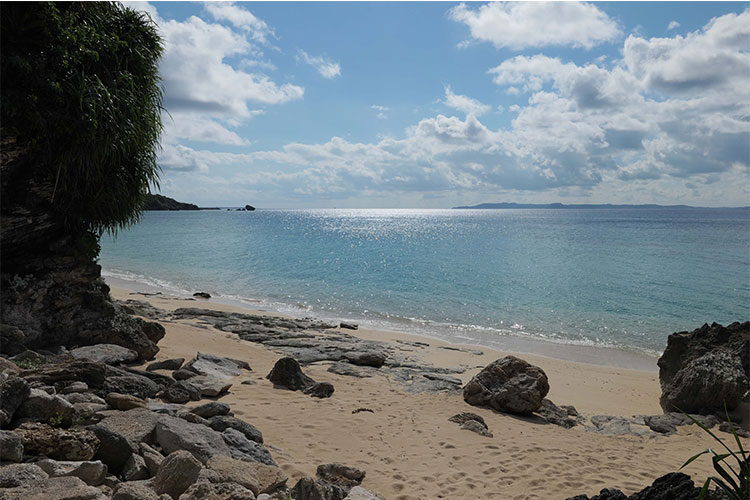 While Tomai-hama may have a bit of a resort beach vibe, Yajiri-hama on the north end of the island is more of a natural beach. Afu Iwa is a small islet nearby easily accessed by foot when the tide is low, according to the Okinawa Convention and Visitors Bureau. To access Yajiri-hama, you need to go on a small road that cuts through bushes. I could not find this road the first time, ended up going all the way around the island just to get there. When I finally found the spot, only 30 minutes were left before the departure of the ferry for the return trip. So, I didn’t have time to swim or take a walk to the islet. However, the peaceful view rejuvenated me. It was totally worth the visit. 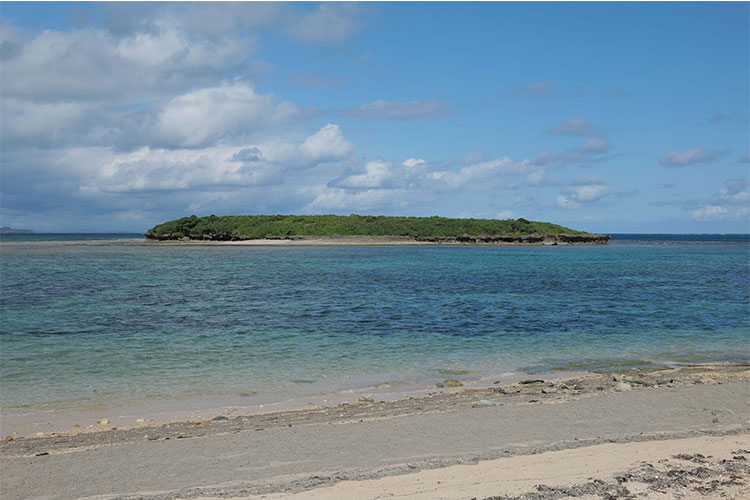 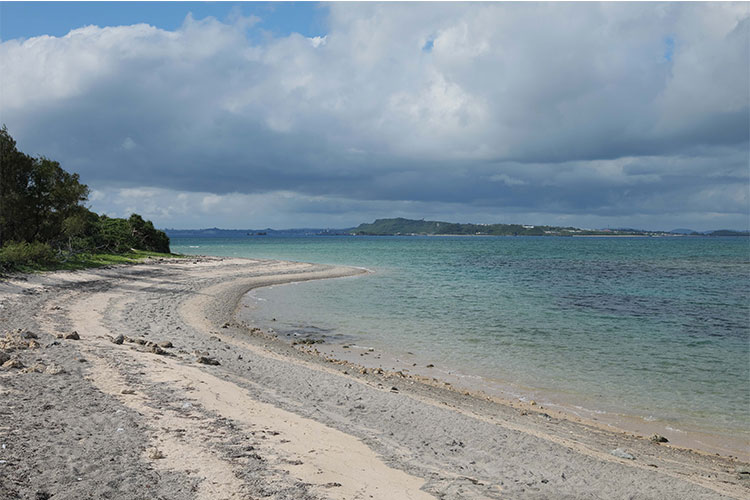 In total, I spent about three and a half hours touring the island. When I boarded the 3 p.m. ferry for the return trip, I was exhausted from my tour de carrot island. Despite the exhaustion, the beautiful beaches I’d seen lingered on my mind. Equally unforgettable were the peaceful carrot fields I pedaled past on my way to other points of interest.

Speaking of carrots, I didn’t want to leave the island without trying its signature vegetable. Unfortunately, it was a little too early for a harvest. I did still manage to get a taste of Tsuken Island back at Heshikiya Port. At the ticket counter I found a vibrant orange bottle of carrot cider for sale.

So, I bought one and tried the juice at the boating dock. Enjoying the delicate sweetness of carrots in the salt breeze, I was imagining my next trip back to the island, this time for swimming in the ocean and trying some carrot dishes. 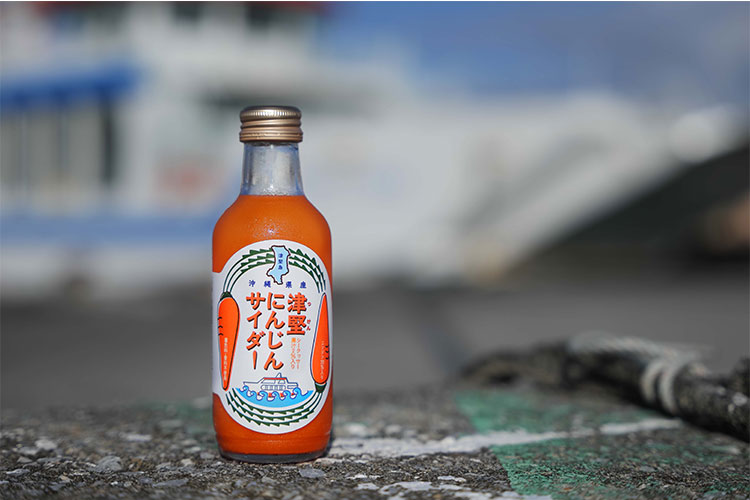 *Ferry Kugani shuttles back and forth between Heshikya port and Tsuken Island three times a day. Plus, there is a service of a speedboat in the early morning and early evening. Services are available every day for both ferry and speedboat. The timeline is posted at here. Prior reservation is not accepted unless you plan to get your vehicle aboard the ship, which costs 10,00 yen or more for a round trip.

*Although there is a restaurant near Tomaihama beach, it may remain closed due to COVID-19 safety precautions. On the island, some stores had snacks and drinks for sale. 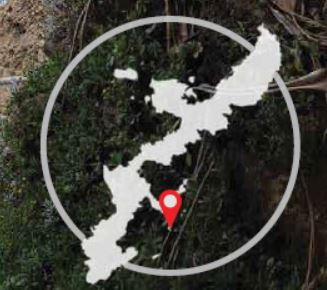 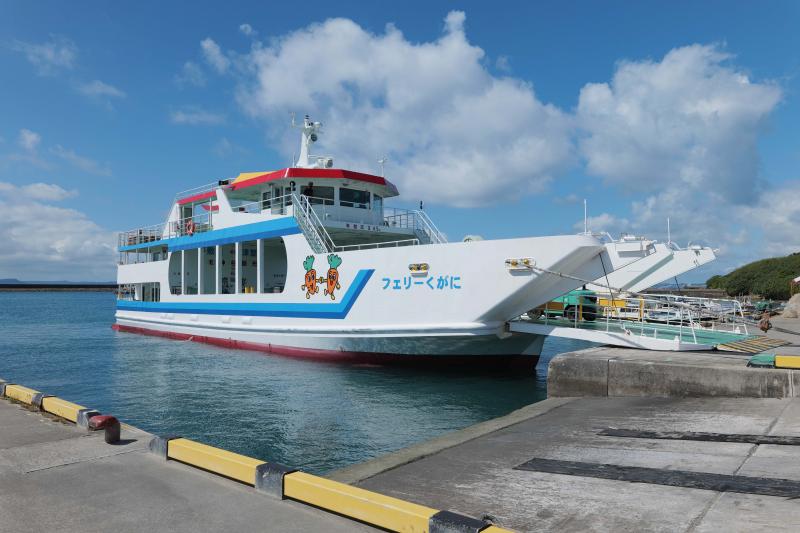