It was by accident that I stumbled upon the “Indy Jones Mile,” a Nanjo City trail as I researched outdoor activities in Okinawa.

Over the years, I have hiked several of the island’s trails, but none in the southern part, much less one named after a Hollywood movie, so decided to give it a try.

I drove 45 minutes from Camp Foster toward the Tamagusuku Castle Ruins, a landmark for the course. I parked the car near the castle ruins and walked a few minutes until I reached a red arrow sign with the wording “Adventure Walk.”

The first stretch was a brisk walk on a concrete-paved road through a lush green field. Curving left and right, the road went down a hill with a beautiful view of the southeast coast. It was mostly an easy and comfortable walk. After walking for 10 minutes or so, I found myself near a quiet, residential area. 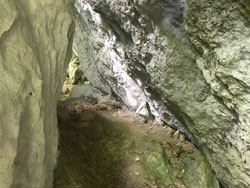 I passed red-tiled-roofed homes, an old tomb, and occasionally I could hear goats somewhere off in the distance of this quiet neighborhood.

After 20 minutes, the road gave way to an unpaved uphill path leading through a forest. This stretch was peaceful, and the shade of the woods was a relief after walking in the sun. Butterflies fluttered about and the cicadas were echoing through the thick brush. Signs with arrows were posted at several spots, and a rope was stretched along the route to guide trekkers; there was no need to worry about getting lost.

I began to suspect that I had taken the wrong way because this hike seemed more of a picnic than an adventure. Soon, however, I would know I was in the right spot. 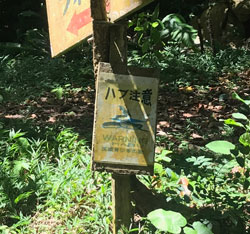 I reached a warning sign for Habu snakes, a venomous snake native to the island that hikers should be careful to avoid. Once I continued beyond this warning sign, the reason behind the trail’s “Indy Jones” moniker did not remain unfounded. Soon, the path began to narrow, weaving through trees and shrubs, and winding around the sides of a hill. There were tight spots where one wrong step would surely send me tumbling down the valley. The ground was covered in fallen leaves, moss-covered stones and thick tree roots forcing me to duck, dodge and trek a little closer to the ground. At other spots, I had to walk through natural tunnels going through and between huge rocks, some of which were on steep inclines and deep declines. Had it not been for the rope tied to the trailhead, this hike would have been too difficult.

As I was struggled with the bumpy road, my heartbeat and breathing raced. I cursed myself for not carrying bug repellent and for bringing a heavy zoom lens and other camera gear, which were no use in the forest. Coupled with the fear of Habu snakes, I picked up my pace. 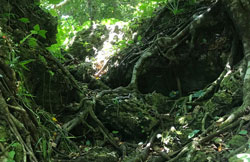 For the record, although I did not run into a shaman who performed a bloody ritual nor was I chased down by a gigantic boulder, I no longer doubted the credibility of the “adventure.”

After what seemed to be a 30-minute of rocky up-hills, treacherous paths, a lot of sweating and heavy breathing, wooden stairs leading to Tamagusuku Castle Ruins came into view. This sign of civilization brought some much-needed relief.

I made it to the top of the stairs overlooking the southeast coast and the forest. The view was a sweet reward after the challenging hike I’d just finished. From this point, I could also see the paved road which would lead me back to the starting point. 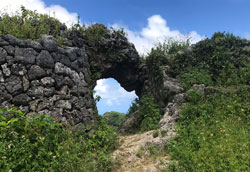 According to my phone, this trek took me about an hour and was a little over 1.5 miles long. Though much shorter than an Indiana Jones movie, this hike made me sweat a lot more than any villain and other-worldly phenomena on the big screen ever could.

If you’re looking for an adventure, this is a great hike. Just don’t forget to bring some bug spray and watch out for snakes! 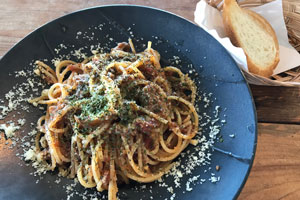 After my adventure, I took a 10-minute drive to Tenku Terrace OoLoo for a relaxing lunch. In Okinawan dialect “OoLoo” means blue, and this café high above the southeastern coast has a great ocean view embodying that meaning.

Inside, the décor is sleek and brings Hawaiian vibes. Their menu had various items including rice omelets, cheeseburgers, taco rice and more. Being in the mood for something filling after an hour of hiking uneven terrain, I went for their pasta of the day (1,200 yen or about $11.26), which happened to be spaghetti Bolognaise.

At OoLoo, one of the most standard pasta dishes turned into a visual delight. The meat sauce was mixed well with the spaghetti and topped with powdered cheese and parsley served like an art piece on a blue plate. The sauce had a depth as the sweetness of the meat, fruity tomato and extra spice melded together, making for a delicious medley with the cheese and pasta. Buffet-style soup, salad and drinks (380 yen) also came with my entrée and I made several trips for shiikuwasa citrus juice refills.

OoLoo is recommended on the Nanjo City tourism’s site for serving dishes cooked with local produce. Enjoying the taste of Nanjo City and the superb ocean view this city has to offer was definitely a refreshing way to cap a challenging hike full of adventure. 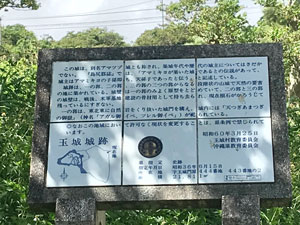