On a Monday morning in late September, I hit the road and headed north. With the end of Japan’s State of Emergency being in sight, it was finally starting to feel okay to enjoy some outdoor activities.

A few months ago, I’d visited the same route for some snorkeling and cycling, but this time I was here to go for a hike.

I’d driven past the Wansaka Oura Park roadside station several times in the past but hadn’t stopped before. Here there is a boardwalk taking visitors around and through a mangrove jungle. So, I made my way here for some exploring. 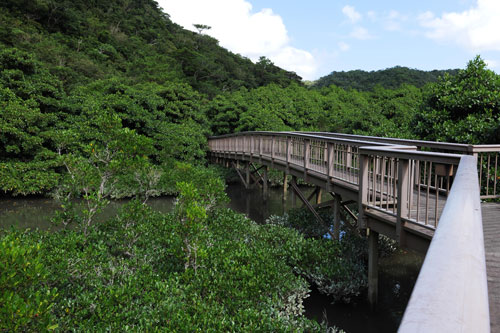 When I pulled into the parking lot of the station, there were only a few cars there. First, I paid a 360 yen entrance fee inside the station store and then made my way toward the boardwalk gate.

According to a brochure I received at the store, the total length of the course was 726 meters (approx. 2,382 feet). The boardwalk runs north cutting through shallow water that spread toward the east. On the left-hand side, or the west side, a jungle spreads beyond the edge of the water.

It was around 11 a.m. and the tide was high. Unlike resort beaches on the west side of the island, waters gleam in murky green, indicating that the bottom was carpeted with mud, not sand. If the tides had been low, I would have a chance to see fiddler crab and gobies crawling, and jumping on the muddy ground. I was a little disappointed that I could not see any of these small creatures, but the view and peaceful atmosphere made me feel good.

As I made my way across the halfway point, I caught sight of a cluster of mangroves resembling a small island. Once I came close, the boardwalk branched off to the deep part of the bushes. Mangroves roots ran intricately and densely at the bottom, as if to push the trees above the water. There were also some water channels running through the roots. The flowing current was slow and a few flower petals floated down, adding color to the green water.

I tried hard to look for creatures but had no luck. I reached a pavilion with a bench, so I took a seat and had a break. Here is where I was finally able to encounter some signs of life. As I was checking the photos I took, some humming noise was approaching from behind. No sooner had I looked up than I noticed that there was a beehive on the backside of the roof. I packed my camera gear and left the pavilion immediately.

The rest of the boardwalk led to an even deeper part of the forest. Still, no crabs or gobies. Perhaps they were lurking behind the roots or under the water to avoid being discovered by an intruder like me. Mangrove trees were gleaming in the dark, as lights bounced off puddles of water here and there. 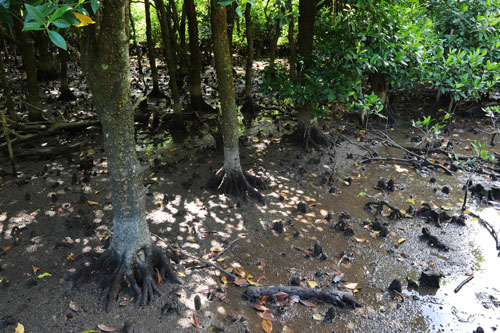 The end of the boardwalk was at the north end of the shallow water. About an hour had passed. Given the length of this path, I spent way more time than needed to complete the route. The curious view of the tropical trees and the tranquility of the trickling water made me forget the time for a while.

Maybe on my next visit I can kayak to get closer to the resident crabs and gobies of this mesmerizing mangrove cluster.

Pineapple Park worth a visit 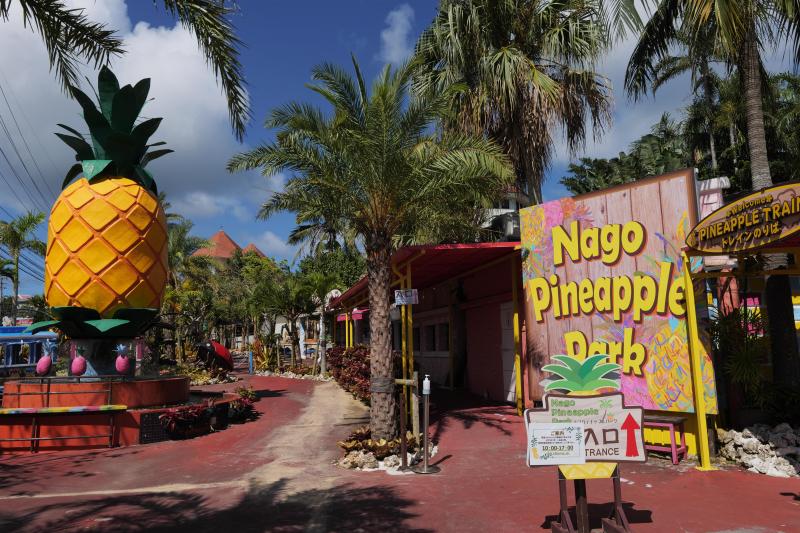 If you have spent some time in Okinawa, you probably have heard this song with a funny tune. 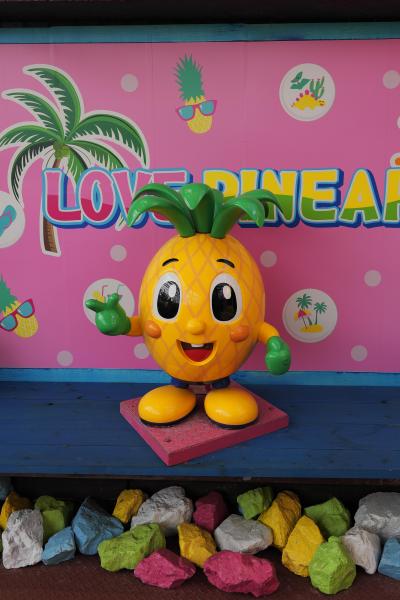 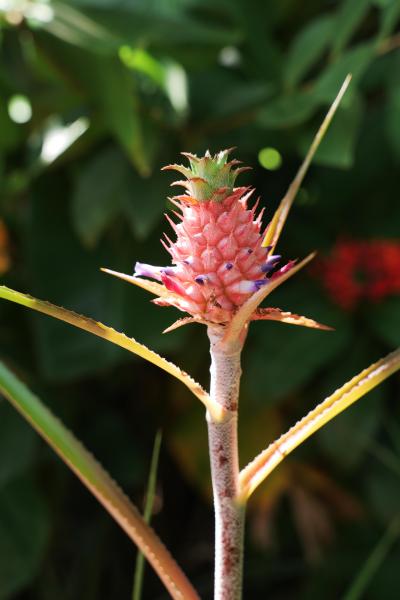 This is a theme song for Pineapple Park, a theme park dedicated to the tropical fruits in Okinawa. This theme park is on Route 84, which cuts through Motobu Peninsula and is a recognizable tourist spot on the island, especially for first-timers.

Pineapple Park first opened its doors as the Nago Pine Garden back in 1979. Growing up on Okinawa, this park was popular for tourists, but I visited once when I was a kid. I can’t remember much about my first visit except for the tasty pineapple I tried there.

From Wansaka Oura Park, this theme park is only a 20-minute drive. So, visiting there after the walk through the mangroves crossed my mind and I’m glad I decided to head over.

As I walked through Pineapple Park’s pink-colored gate, I felt a little awkward, like a fish out of the water in a strange place. Once I passed through, however, the site of the park dissolved any of my concerns.

The first segment of the tour was a kart ride, which offered an overview of the park. The small yellow kart passed by pineapple farms and flower gardens. Here and there, some models of insects were exhibited. This is no Disneyland or Universal Studios, but I still found it quite amusing. Those artificial insects had a hand-crafted finish, which made them more appealing.

Once the kart came to a stop, I began walking through gardens of tropical plants. Along with familiar plants such as pineapples, bougainvillea, hibiscus and fern trees. There are also unique ones such as anthurium and ananas.

Waiting at the last section of the tour was a group of robotic dinosaurs. I knew this type of attraction existed in other Okinawa theme parks as a way to entertain visitors, especially kids, but I was not expecting it here. I asked myself, “What do dinosaurs have to do with pineapple?” 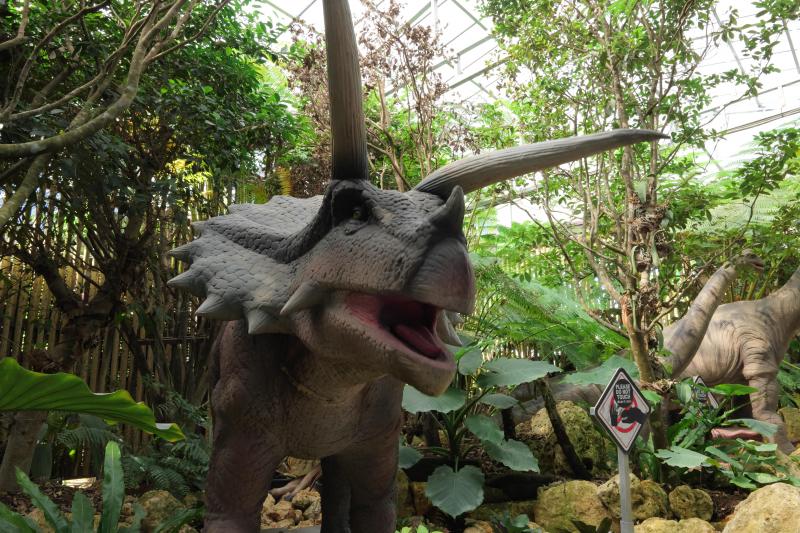 However, once looking at the robotic triceratops and pteranodon hulk and roar in a goofy way, my small question didn’t matter anymore. Plus, who could not adore dinosaurs who play music like three amigos?

By the time I came to the exit, almost one hour had passed. Coincidentally, I spent the same amount of time at this park as I did in the mangrove forest.

To be honest, I was a little skeptical about visiting the theme park at first. But I was glad that I went. The theme park did not offer me a chance of seeing the curious wildlife of the mangrove, but the cheerful ambiance and handcrafted creatures made me smile and reminded me of my childhood.

Bite into The Bros scrumptious signature sandwiches on Okinawa