Because I didn’t know what my options were until I arrived, I set aside the afternoon of my anime sightseeing day trip to Nanjo City for whatever locally spoke to me. Since the Sefa-Utaki, the most sacred place in Okinawa’s native religion was closed for sightseeing I used a map provided by the Nanjo Sightseeing Information Center in Chinen to find a good castle viewing route. 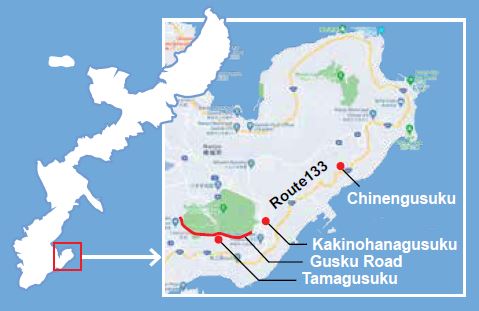 While Okinawa has five famous castles in its UNESCO world heritage collection, like in Wales those are just a few of the thousands littered on every hill that could be fortified. Though unlike Wales’ castles which were built to be oppressively English against that kingdom’s first colony, these castles were built to protect the smaller kingdoms that made up Okinawa prior to its unification under King Sho Hashi in the 15th century. Most of the island’s 500 castles were eventually abandoned and allowed to fall into disrepair for a half millennia or more, their true histories lost to time and myth. In their wake is left grey stone hidden in jungles along with some hidden scenic spots equally devoid of tourist crowds, vending machines and souvenir shops.

If you want to see the oldest sites in Okinawan history, Nanjo is a good place to start. Its home to sacred places called utaki, castles and other sites place associated with Okinawa’s origin myth which says the goddess Amamikiyo descended from the heavens and created the Ryukyu Islands, beginning in what’s now Nanjo. This story is not associated with mainland Japanese myths; it’s a separate mythology due to Okinawa’s distinct cultural origin prior to its conquest by Japan’s Satsuma Domain in 1609.

Common features of Okinawan castles are the wavy limestone walls and all the ones I’ve been to have contained at least one utaki or sacred site, which the castle was built around. Gusuku is Okinawan for ‘castle,’ and shares the Japanese kanji for the word. The kanji is usually read ‘jo’ or ‘shiro’ in regular Japanese. This makes adding castle to the end of a –gusuku word redundant but it’s also awkward to not say gusuku when it’s an integral part of the place’s name. This can also get confusing when the word gusuku/jo/shiro get swapped around for place with no rhyme or reason or occasions such as ‘Tamagusuku jo’ which is literally “Tama Castle Castle.”

Chinengusuku
Since I was coming from the coastal road that runs by Chinen Point the nearest castle was Chinen. Word of advice, don’t follow Google Maps to the gusuku site but rather the Chinengusuku parking site.

This compact castle sits atop a cliff overlooking the sea for one more of Chinen’s many ocean panoramas for taking in the vivid blue sea from up on high. The ruin itself is most notable for a pair of arched doorways, which makes it the most ‘modern’ looking castle I saw that day despite being built in the 12th or 13th century. 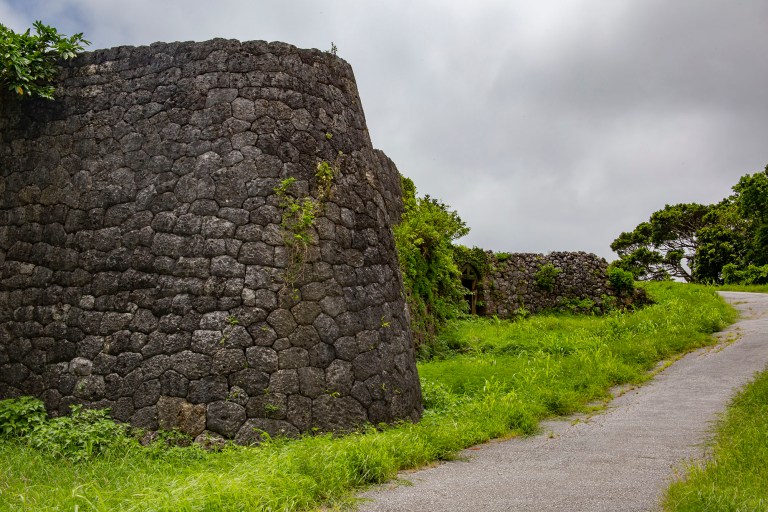 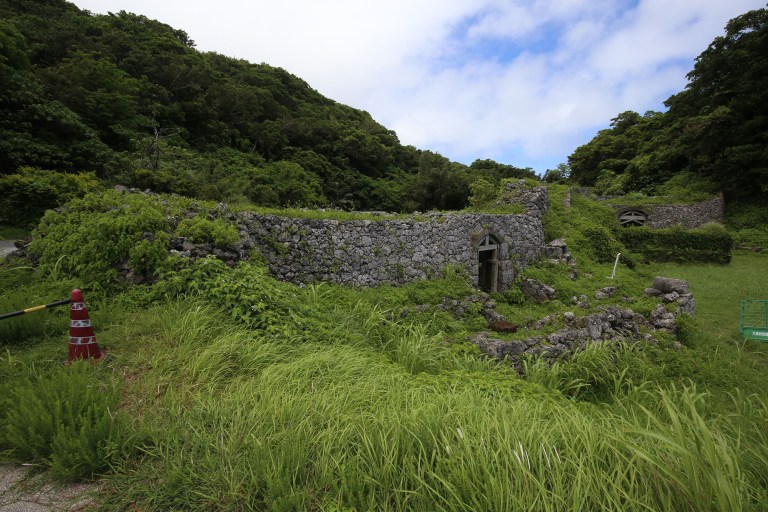 Just as interesting as the ruins themselves are the surrounding smaller ruins and jungle path to Chinen-Ukka spring. The spring is associated with the Okinawan rice cultivation myth which says that the goddess Amamikiyo, Okinawa’s original ancestral spirit, planted rice here. When I came by a family with small kids was playing around the spring with bug nets. 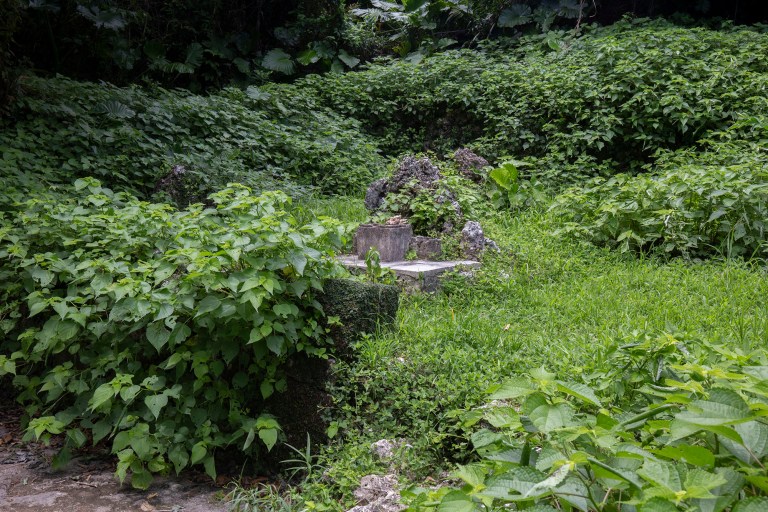 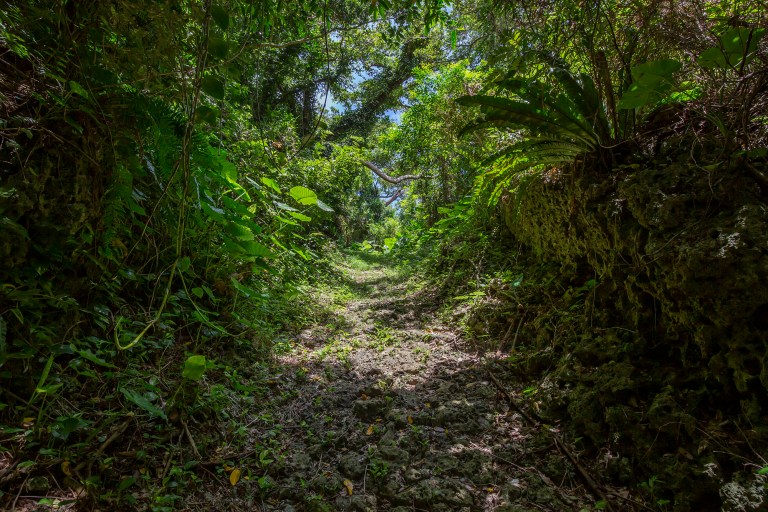 Kakinohanagusuku
Moving along, because Nanjo has so many historic ruins I’d intended to skip some of the lesser ones to focus on the castle. I made an exception for Kakinohana Hija spring, which was a good thing as I would discover later. The spring is a downhill walk from the rudimentary parking lot and even from a ways off I could hear the sound of children playing. Several families had gathered and were splashing around in the cool spring water! Maybe it could have been a place for quiet introspection or something, but it was definitely a place for the simple fun of splashing friends and family to keep cool under the oppressive heat.

From here I returned to the parking and walked a few minutes down the road to the castle ruin, which has no parking. This was my favorite of the three castles.

Kakinohana Castle is said to have been built in the 14th century by the second son of the Minton Aji (lord). Earthenware and imported Chinese ceramics had been found on the site which is now mostly swallowed up by the jungle.

Layered uneven stones in the jungle grow uphill toward an opening in a concealed wall encased by the jungle. Are they steps? Is this just the landscape? Even the walls almost feel more of an organic piece of the land and not manmade. Abundant foliage rimmed the cleared path beyond, my every step setting off a cacophony in the underbrush all around. The sound of unfamiliar and unseen birds came from higher. More of the walls came into view leading to a splitting path, one ending in an overlook whose view is now just trees and the other flat clearing with a single, simple stone monument in its center, likely the utaki. There was a drama to how it was set up and replaying my time at the jungle ruin in the sweaty mid-afternoon felt like a place far from modern civilization and not one surrounded by residential houses and cafes just out of sight and hearing. 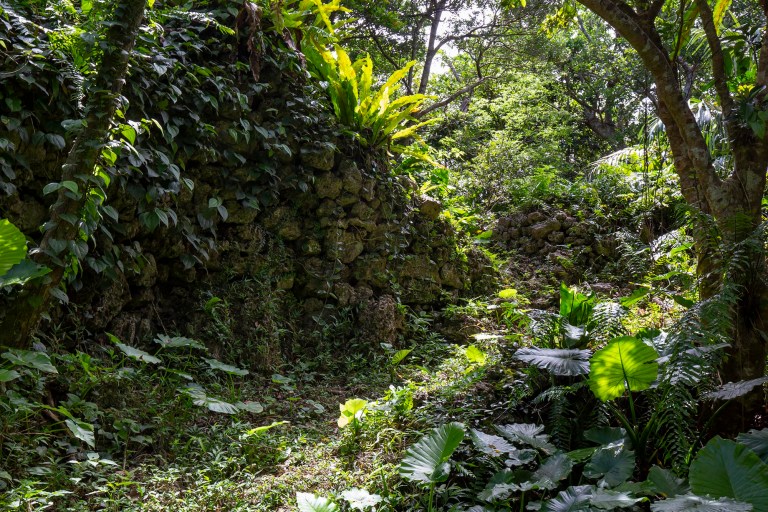 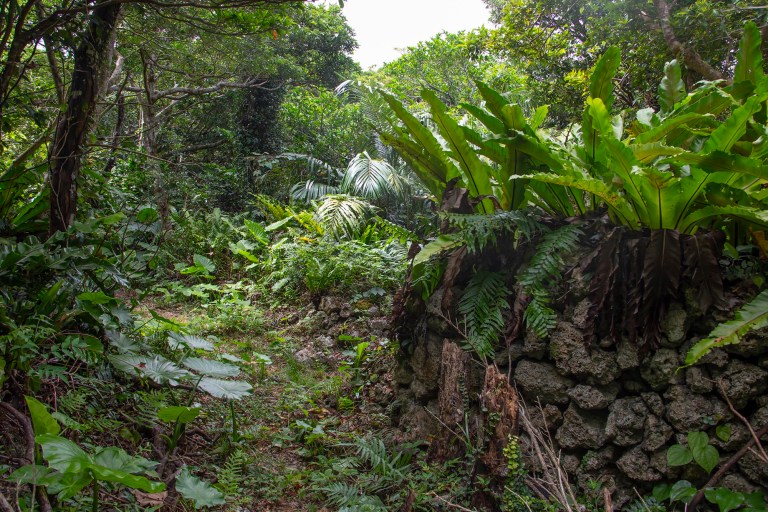 Tamagusuku Castle
My last stop was Tamagusuku, a hilltop castle said to be have been built by Amamikiyo and faces the eastern paradise of Niraikanai across the water from which she came.

The parking is just a large grassy clearing beside the hill. Seeing a clearing leading up to the castle walls looking down on me near a stone sign I assumed that was the way up. Up the knee-high grassy hill, maybe full of habu. It’s an adventure right?

Anyway, don’t do that. Walk to the far side of the parking facing the hill, there’s a second jungle path leading to the wooden stairs that run to the entrance.

The story behind it makes Tamagusku worth visiting, though like the other two castles it was rather small especially compared to the more famous and admission-charging sites. A golf course sullies the otherwise beautiful view but it was nice. The castle’s true standout feature is its entrance, an organically shaped hobbit-hole formed amidst the walls. It gives a slightly otherworldly quality to this quiet ruin. 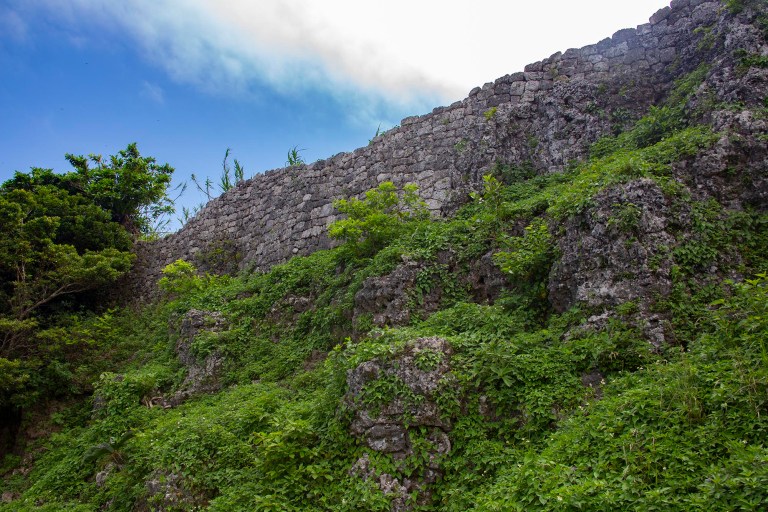 The simplicity of these three castles is part of what makes them special. They hail from an earlier time when this was all that was needed to protect the sacred place and that they remain so many centuries later with little to no explanation, the lack of story, actual makes seeing them feel like their own brand of adventure. Going during a pandemic, when overall tourism is down and being outdoors makes them a safe alternative to indoor attractions, and feels like the best time to have them to yourself with few interlopers to spoil the magic.

Before setting out, I recommend getting the free Nanjo City Tourism Map as it contains multiple sightseeing routes showing what is relatively near what with good recommendations for visiting order to make the most of your trip.

VIDEO: Ojima Island in southern Okinawa belongs to the cats