While many resort hotels on Okinawa’s west coast might offer an ocean view, Hyatt Regency Naha has a little something different.

What the Hyatt lacks in ocean, it makes up in Okinawan culture right next door.

Tsuboya Yachimun Dori is a winding street that runs between the gateway of the Hyatt and Himeyuri Dori (Route 330). About 1,280 feet long, the street features about 50 pottery studios, shops, cafés, and historical sites that help to provide a glimpse into the rich history of the island.

According to the Tsuboya Yachimun Dori Association, this street was originally developed in 1682. In an effort to make pottery its major industry, Ryukyu Kingdom brought kilns from different parts of the island to the neighboring area of this street, where people had a good access to clay, water, firewood and a port.

In the 330 years since, this has remained a mecca for Okinawa’s pottery industry. Nowadays, the scale of production may be smaller because many craftsmen moved to Yomitan Pottery Village in 1972 to address smoke hazard issues around the area, but many parts of the street remains the same to carry on its tradition. 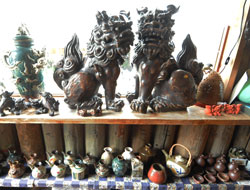 Feenukama (Kiln of South) is located about 160 feet from the entrance of the Hyatt. Although not in use anymore, at 66 feet long and 10 feet wide, this hog-backed kiln is the only one on the street preserved from the old days. A stone monument says the kiln was once used for to produce jars for water, liquor and ashes.

There is a café next to the kiln, which shows another side of the street’s history. Along with the various crafts such as cups, sake bottles and Shesa, a four-legged beast from Okinawan legend, on display, there are also equally interesting roof-tiles that people can see above. According to Minako Shimabukuro of the café, half of the tiles were installed as part of the U.S. military’s effort to restore the district after the war.

As “The History of Naha,” a book compiled by Naha City indicates, Tsuboya became the first district in the city to start post-war reconstruction. The selection was made to address the necessity of eating utensils and various other forms of pottery.

The roof-tiles may not look like anything special on the surface, but they are surely one of the local creations worth noting. 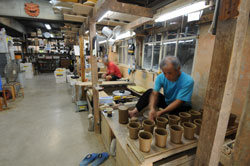 Each pottery shop on the street has its own unique collection. Some offer items that look like pop art, while others have a more classical-type of selection. Arakaki Pottery Store is one such place that carries on the tradition of the Ryukyu Kingdom. The store is filled with crafts such as large plates and urns or tea cups with flower designs inspired by Okinawa’s nature. Among them, turquoise blue plates and cups of “Churaumi (beautiful sea)” product line are featured for their craftsmen’s ingenuity. Like other pottery stores on the street, all the items are displayed without glass cases; each item is meant to be closely examined or touched by customers.

The store’s website says they have creating pottery for more than 300 years. The luxurious and traditional pottery attracts people, including those from the U.S. military, according to staffer Hatsuko Arakaki.

“We have customers and friends coming from military facilities such as Camp Courtney,” says Arakaki.

Taking a look at the different pottery or even holding some in your hands would in itself be a good cultural experience. 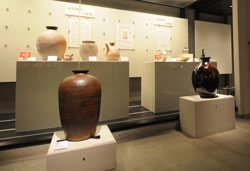 Looking at historical sites or pottery becomes even more meaningful when coupled with a historical perspective. Naha Municipal Tsuboya Pottery Museum, about 33 feet from the Hyatt, gives visitors a look at the island’s pottery history.

The 7,000 items housed at the museum range from a 6,700-year-old piece to others from the Ryukyu Kingdom and masterpieces by today’s maestros.

“Tsuboya-yaki, which means pottery produced around the pottery street, or that inherit the tradition of Tsuboya, reflects each age because skills progress and popular design changes from one age to the next,” said Curator Tatsuhiro Higa, explaining the intent of the display.

Higa also cited geographical background as another factor that played a big role in the development of the craft.

“Tsuboya-yaki is known for its variety, which was created as a result of trades the Ryukyu Kingdom had with many countries. Pottery was imported to this small island from places like Southeast Asia,” Higa said. “Absorbing various skills through trade, Tsuboya-yaki was developed as a craft to represent the country. When you look at Tsuboya-yaki, you see Chinese, Japanese, Thai, Vietnamese, or various other styles in it.”

On the walls of Sakurazaka, many Yachimun pottery is displayed. It’s safe to say the potteries are not just homage to its proximity to pottery street. The ingenuity of items, which were crafted by combining skills from various countries, resonates with that of the restaurant and its chefs who serve food imported from all over the world.

Whether having lunch at Sakurazaka or enjoying a stroll down the pottery street, visitors can get a glimpse of the past and future where Okinawa and the rest of the world come together.

The Hyatt Regency is known as a high-end hotel, and you may think that its lunch buffet is expensive.

Although you have to pay little more than the typical lunch buffet at an on base restaurant (of course), trust me, it’s worth it!

Recently, I took a friend to Sakurazaka, a restaurant in the Hyatt Regency in Naha, to try out their lunch buffet.

One step inside, we were greeted with chic interior - something you would expect from a high-end hotel or restaurant. Sakurazka is a restaurant where customers can enjoy food selected and gathered from all over the country and the world. However, bearing the name of an old bustling area in Naha where the Hyatt hotel now stands, this is also a place where people can touch Okinawa’s culture and cuisines as they immerse themselves in the new aspect of the city as an international tourist city.

Like a normal buffet restaurant, Sakurazaka offers “everything.” On top of that, they have a different theme Monday through Saturday each week. Monday: sushi; Tuesday: shrimp; Wednesday: desserts; Thursday: meat; Friday: Asian; Saturday: special brunch.

We looked at the daily options, and it wasn’t hard to choose. Meat Thursday, of course! A girl’s got to eat!

“Among the daily specials, the meat menus for Thursday are the most popular,” says Chie Nakao of the sales and marketing of the hotel. “Every day, we prepare the freshest food possible, and our chefs use their ingenuity to serve the food the best way. Plus, the network of Hyatt Regency allows us to have fresh food from many parts of the country and the world.”

The food is beautifully presented and comes in two types, regular buffet menus and daily specials. Although deemed to be regular, the everyday menus include elaborate dishes such as beef simmered in red wine, or perna gratin, as well as local dishes such as Sata Andageee (Okinawan donuts) and sautéed tofu and vegetables. The mild sweetness of the perna or the soft texture of the simmered beef deserves to be called “exceptional.”

At the live kitchen area, chefs worked hard, cooking lamb, sirloin steak, duck and hamburger steak. You can actually watch them cook the tasty meats as you prepare to devour. Yummy!

There I was, staring at all the meat dishes, trying to figure out which one to try first. I decided to start with the lamb chop and sirloin steak. Meat secured!

Then I went to the salad bar. I was so happy to see a wide range of fresh vegetables at the salad bar. And the dressings were original too. Fresh salad - check! Off to the side dishes counter.

From Asian to Western dishes, there were so many side dishes to choose from! They said there are more than 40 dishes are available daily. Talking about huge food selection.

The dessert section was full of many different sweets. Ice creams, cakes, pies, cookies, and more! The sweets I tried were delicious.

And as you can guess, the meats were so juicy and tender that I had to go back for seconds. And, overall, I’d go back to Sakurazaka for seconds…and thirds…and so on!

They also have a private room for larger get-togethers (up to 14 people), so if you are looking for a place for get-together or luncheon with your friends or family, give Hyatt Regency Naha a try!

A visit to Naha often means walking down a busy street or having a quick meal as feeling the hustle and bustle of the city. But at Sakurazaka, people can slow it down and enjoy a luxury buffet mixed with global and local treats as a getaway from the ordinary. Oh, and there’s three-hour free parking for customers, so there is no need to rush! 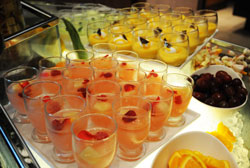