Getting hooked on deep sea fishing off Okinawa

Getting hooked on deep sea fishing off Okinawa

Perhaps I didn’t understand what fishing is about until the first bite. However, once my reel began turning fiercely, it didn’t take me long to realize that I was in a battle where there’s no way out except to see it through to the end. 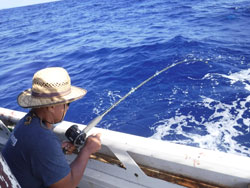 Before dawn on an October morning, I got on a fishing boat at Umino Fishing Port on the southeast coast of Okinawa. The small boat departed shortly past 6 a.m. with 10 members aboard, including a skipper and a deckhand.

Under a clear autumn sky, the sea’s high waves frequently jolted us as we navigated a few hours away towards the area where we’d drop lines to catch our future dinner.

This tour by Salty Rod’s Fishing Okinawa, a tackle shop near Kadena Air Base, brought me and nine strangers together in these close quarters. Never having been a man of the sea, I was starting to feel a little anxious. In an effort to contain the jittery feeling, I closed my eyes, envisioning casting my line. 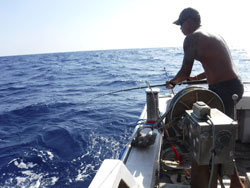 “First catch of the day!” cried out one of the passengers, breaking the silence. When I opened my eyes, a couple of passengers were working hard on reels fixed at the rear end of the boat. Next thing I knew, a mahi-mahi emerged on the deck, caught with a gaff hook held by the deckhand. We cheered at the first catch while the fish kept bouncing around on the deck.

Not waiting long for the excitement to subsite, a buzzer echoed throughout the boat; It was time for all hands on the deck for fishing! My watch indicating it was a little past 8 a.m.

Following a brief explanation by the deckhand on how to handle rods and lines, how to put kibinago (silver-stripe round herring) and sardine on a hook 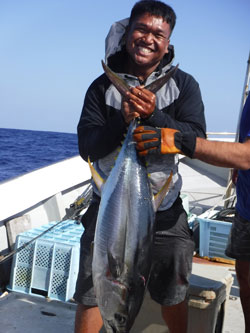 for bait, passengers lined up on the steer-board side and cast lines into the water. One after another, they claimed bites and began reeling in. Mahi-mahi were jumping above the water in an attempt to break free from the hooks, others were chasing the lures skillfully manipulated by anglers. Tuna fish were also among the bunch in the water trying to catch a bite. As the number of catches continued to grow, the mood on the deck pumped up.

Although I joined others in cheering and congratulating the winners, the smile on my face probably looked a bit clouded. Not feeling anything on my line, I came to wonder if I would ever catch one. Occasionally, I reeled up, only to find bait stolen from the hook.

Watching others smile for photos with their large catches in hand, I began to feel left out. As I was starting to lose the confidence gained when others were catching fish, my reel began to go crazy – the fight was on!
The line that looked loose and floated like useless lint was now tight like a bowstring, bending the rod into a narrow angle. My eye traced the line and I could see the fluorescent yellow mahi-mahi glistening near the surface. Next thing I knew, it jumped out of the water about 100 feet away from the boat.

For a brief second, I tried to recall the homework I did the night before, trying to be prepared for what was coming ahead. However, all the last-minute cramming on how to make fish wear out or how not to hold a rod upright, was lost instantly. At that moment, I became a desperate animal, no different from that mahi-mahi moving wildly in the water.

All I could think of was to turn a knob on the spinning reel. With the big fish showing no sign of weakening, I had to literally fight for each spin of the reel. After only a couple of minutes, I found myself exhausted and tempted to sit down on the deck.

“Stand up!” The voices of the deckhand and other members whipped me from behind as I tried to duck.

Without their encouragement, I would have let go of the rod and lie on the deck. But I quickly realized there was no escaping from this duel, so I gathered my strength, stayed on my feet and held onto that rod like my life depended on it. 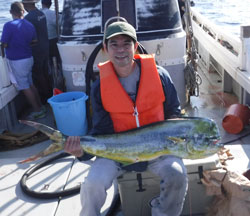 As I kept reeling in, my line was pulled widely to the left, toward the bow. This stubborn mahi-mahi’s last stand was to try to break free by forcing my line to get tangled with the lines of my fellow anglers.

The deckhand told me to move around the side as the other anglers lowered their rods to avoid getting tangled. Positioned on the bow, I kept reeling in. As soon as the mahi-mahi was within reaching distance, the deckhand swiftly stepped in with a gaff hook and brought him in.

The big fish bounced around the deck for a while, still with a lot of energy to burn. I just sat down on the deck, watching the wild act. I had no energy to move.

Other members of the boat congratulated me. Putting the fish to death by stabbing its head with a spike, the deckhand brought me the catch for a photoshoot.

As I held the big fish in my hand, I couldn’t contain an effortless smile, the first one since I’d boarded the fishing boat. Despite my hands and trousers being dirty with blood and the smell of fish, I felt great.

A buzzer echoed and those on the deck reeled up as the boat moved on to the next fishing ground. 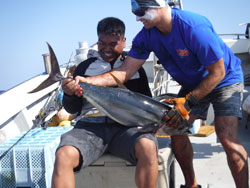 We tried several fishing grounds until early afternoon. Although I was already exhausted after the first battle, I kept on fishing. By the time the boat started sailing homeward, we all showed signs of fatigue, but we all had smiles on our faces.

For Michael Ponn, a regular angler from Camp Foster on the boat with me, this is an incomparable experience.

Ponn caught tuna on this trip by “jiggling,” a fishing style invented in Japan, to lure the fish.

“I had a blast. I love being in the water,” Paron said. “I am a diver. I do spear fishing. I was always trying to catch a mahi, which I did today. So, I am happy.” 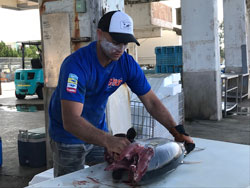 Aside from the comradery and opportunities to master new fishing techniques on boat fishing tours like the one I took, many of the anglers on this trip echoed that fishing off Okinawa is some of the greatest in the world.

And for many, that included the price. Vincent Dosev, a U.S. Marine and the deckhand on my trip, said the price to go out fishing here is incomparable to anywhere else.

After fishing at around five different spots off the coast, we returned to the port from our thrilling adventure at around 3 p.m. Between all of us, we caught more than 20 mahi-mahi and tuna, which we lined up on the deck for photos. After, Dosev cleaned out most of the fish before we packed them into ziplocks and ice chests.

Soon, I left the port following the others, and headed home with thoughts of the delicious mahi-mahi steak I earned for dinner. 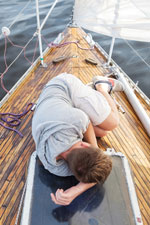 Whether you’re an experienced boat fisherman or a novice, nothing can ruin a good time like suffering from seasickness when you’re trying to enjoy a day of fishing.

The deckhand at Salty Rod, Vincent Dosev, suggests taking seasickness medication the night before and throughout the day on the boat.

Dosev also suggests avoiding alcohol. “One of the big things is making sure you don’t go out drinking, partying the night before,” he said. 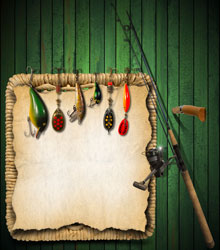 VIDEO| Take me out to the ballgame in Japan!

Summer in Sunny Miyakojima: The perfect getaway for summer vacation