On hallowed ground: Tuning in to Japan's temple-shrine dichotomy

On hallowed ground: Tuning in to Japan's temple-shrine dichotomy

People may be surprised to hear that Japan has more temples (77,000) and shrines (81,000) than convenience stores (48,908). But according to the Agency for Cultural Affairs, it’s true. When it comes to the differences between these two types of sanctuaries, however, the equation is not so simple.

Many of my foreign friends ask me, “What’s the difference?” Honestly, even for Japanese, it’s a little obscure. We don’t really put too much value on which of these places we go to pray. We put more value on going someplace to pray. Sometimes, a temple and shrine can even look similar. They may even be on the same grounds.  So, what is the difference, anyway?

The simplest answer is that a shrine is a Shinto place of worship and a temple is for Buddhism.

Shinto is Japan’s indigenous animistic religious practice in which “kami,” or gods, are prayed to or worshiped. These kami can be spirits of nature, such as the sun, mountains and other landforms, or people (usually, the deceased). Shinto literally means “The Way of the Gods.” The practice varies a lot, and there is no single book, like a Bible, that defines it.

“Shrines are the houses of the gods. It is advantageous for local residents to visit local shrines to pray or receive exorcisms,” said Masato Hoshi a priest at Suzukamyo Shrine in Kanagawa. “Shinto originally began as nature worship because gods are believed to be in all living nature. Eventually the worship of ancestors was added to it. Today, Shinto is comprised of various gods.” 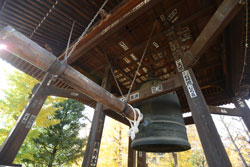 Buddhism came to Japan in the sixth century and took root after a few initial conflicts between its adherents and Shinto practitioners. Despite the early tensions, the two faiths were soon coexisting and cross-pollinating, according to Shinko Mibu, a monk in Sensoji Temple in Tokyo.

“Buddhism was spread by the political authorities after it was introduced in Japan,” said Mibu. “It was a big part of their political strategy to spread the new religion to influence people. Buddhism gradually spread and became mainstream by mixing with Shintoism.

“One reason Buddhism became mainstream is that its methods are more systematic and theoretical, having journeyed so long through India and China,” said Mibu. “But Shintoism did not even have a written book or (specific) teaching, so Buddhism (in Japan) began incorporating Shinto gods into its theoretical stories.”

The mixture of Shinto and Buddhism is called “Shinbutsu shugo,” a kind of intuitional harmonizing of the two faiths that took place from about A.D. 710 to 1868. It evolved into the belief that Shinto gods are actually various manifestations of Buddha, according to Mibu. Except for Ise Jungu Shrine in Mie Prefecture and a few others, most shrines were placed under Buddhist control. Over time, shrines and temples became virtually indistinguishable.

In 1868, however, the new Meiji government sought to restore the legitimacy and power of the emperor using the idea he was a Shinto divinity. It made Shintoism the state religion, priests state officials and began funding some shrines. Buddhist influences were removed from shrines nationwide. Some Shinto activists interpreted the change as implying that Buddhism should be abolished, leading to the “Haibutsfu kishaku” movement which destroyed many temples and historical Buddhist treasures.

Today, however, many Shinto objects can still be found in Buddhist temples and vice versa, proof of the historic and perhaps irreversible coexistence of the two faiths in Japan. These days, many shrines and nearby temples remain friendly neighbors.

“It is very difficult to explain and understand Japanese religion because it is not monotheistic.” said Mibu.

His home temple, Sensoji, was built in the seventh century and is Tokyo’s oldest. Well-known adjacent Asakusa Shrine was built about 300 years later – as an attachment to the temple. They were separated during the Meiji Era (1868-1912).

“Until the separation, Asakusa shrine was used and run by the monks of Sensoji,” said Mibu. “It is interesting that there are more new shrines in Japan than new temples. It is very unique that Shintoism can make someone a god after his or her death. For example, Togo shrine was built to enshrine Heihachiro Togo (1848-1934), the Imperial Japanese Navy fleet admiral.”

After my interview with Mibu, I visited both Sensoji Temple and Asakusa Shrine to pray. Both places are open to anyone, though there are several different rules to follow for each. It was a great opportunity to get a glimpse of the sanctity and diversity of both these historic religions in Japan.

“There are many customs to observe when you visit a shrine, but it is ok if you’re not doing it right,” said Suzukamyo Shrine’s Hoshi. “It would be nice if you remember to bow twice, clap twice and bow once more when you pray at shrine. And also, it is OK if you visit either shrine or temple for ‘hatsumode,’ (first temple or shrine visit of the year).” 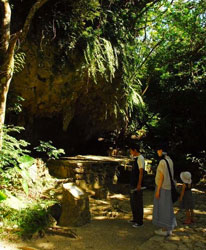 Although there are many Shinto shrines and temples in Okinawa, Okinawans have had their own indigenous religion called Nirai Kanai from ancient times. Also known as Ryukyu Shinto, it is similar to Shinto in that it is based on nature and ancestor worship. Nirai Kanai practitioners pray and venerate their gods and ancestors at sacred places called “utaki,” which are usually located on the outskirts of villages.

According to Nirai Kanai belief, the god Amamikiyo created the ancient Ryukyu Kingdom. Nirai Kanai refers to a paradise which exists far away to the east across the ocean. Once a year, gods are said to come from Nirai Kanai bestowing blessings on the people and good harvests. It is also thought that the human soul comes from Nirai Kanai and returns there when people die. Utaki are sacred places used to commune with this realm.

While some utaki are manmade places of worship, they are often largely unaltered natural areas such as a tree-ringed grove, hills or cliffs with a grouping of stones. People worship and pray at utaki by offering incense, flowers and food. It was once widely held that only women should approach utaki (unlike Shinto which has priest, Nirai Kanai has priestesses), and the gods would punish men who did so. It is strongly believed that natural objects should not be removed and vegetation should not be harmed at an utaki.

Okinawa’s most sacred utaki is Sefa Utaki in southeastern Okinawa. This UNESCO World Heritage Site is a series of trails and Ryukyu altars in the jungle atop limestone cliffs that overlook the Pacific Ocean. 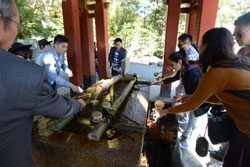 Traditionally, you should not visit a shrine if you are sick, have an open wound or are in mourning because these are considered causes of impurity. Photography is usually permitted at shrines. Watch for signs.

Torii:
The torii gate is the boundary between a shrine’s holy grounds and the secular world. Passing through the torii gate signifies entering the enshrined deity’s domain. Bowing once in front of the gate is proper etiquette, as is passing through it a little to the side instead of the center were the deity is supposed to walk.

Fountain:
To use the purification fountain near a shrine’s entrance, fill one of the ladles with the water and rinse both hands. Then transfer some water into your cupped hand, rinse your mouth and spit the water out beside the fountain. Don’t drink from the ladle or swallow the water. 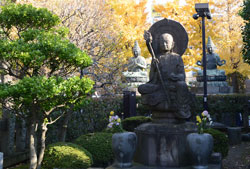 When entering temple buildings, you may need to remove your shoes. Leave them on the shelves at the entrance or take them with you in the plastic bags some temples provided. Wear nice socks. Photography is usually permitted on temple grounds, but forbidden inside some temples. Watch for signs.

Bell:
Bells are used for Buddhist ceremonies such as “Jyoyanokane” purification rites. They are also used to indicate the time.

Incense Burner:
To use the “jyokoro,” or large incense burner, for a healing, buy an incense bundle at the temple, light then extinguish it with a hand wave so it smokes; place it in the burner, lit side up. Fan some of the smoke toward whatever part of your body needs healing.

In Japan, New Year’s is the biggest holiday of the year. It is one of the few times many Japanese will visit temples and shrines, and a perfect opportunity to see Japan’s religious culture and traditions.

On New Year’s Eve, many Japanese flock to temples and shrines to ring in the new year – literally. Buddhist temples nationwide ring a large bell 108 times before midnight for the “Jyoyanokane,” a ceremony to cleanse humanity of the 108 sins recognized by Buddhism.

Tens of thousands visit temples for “Jyoyanokane” no matter how cold the outside air is, even when it’s snowing.  Many booths are set up in temples to sell traditional foods to visitors. After midnight, many stay at temples to pray for the new year. 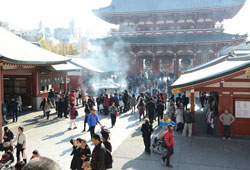 Millions also visit shrines or temples between Jan. 1 to 3 for “hatsumode,” the traditional first temple or shrine visit of the year. The National Police Agency estimates that 99.4 million people visited sanctuaries for this tradition in January 2015.

The practice is believed to be a derivative of “toshigomori,”secluding oneself in the shrine of his or her patron deity for an all-night New Year’s Eve vigil. Hatsumode may also be base an old tradition of making a pilgrimage to a shrine or temple that is located in a direction determined by the zodiac of each new year.

Such traditions may have faded, but the advent of modern transportation fueled today’s trend of visiting some of Japan’s more famous temples and shrines during the New Year’s holiday, according to Shinko Mibu, a monk in Sensoji Temple in Tokyo.

“The bottom line is that whether visiting a temple or shrine, Japanese people just like touching something within that’s deeper than the outside world,” said Mibu. “When people come to shrines or temples to pray, it is the time to touch the nothingness. So, if foreign people want to come to hatsumode to shrine or temple, please feel the nothingness in you. On a deeper level, it is the same as when they visit their own religious place like a church.”

Lucky offerings
For luck, use a coin that has a hole in it (5 yen and 50 yen) when making offerings in temples and shrines.

MY FAVES: Japanese shrines & temples to visit during holiday season

Did you know?: Ema, plaques used as prayers and wishes in Shinto shrines

Naminoue Beach and Shrine: A perfect day at Naha

Take a trip to Todaiji Temple

Let’s take a bullet train to Kyoto when in Japan